Ireland's first renewable energy auction saw nearly 1300 MW of successful projects of which almost 800 MW was accounted for by solar, according to the provisional results published by Eirgrid, the Transmission System Operator. This is the turning point for an industry that has been historically overshadowed by wind while awaiting policy support.

Solar outbids wind in the first round of the RESS auction

The first round of the Renewable Energy Support Scheme (RESS) auction included three categories: Solar Preference Category, Community Preference Category, and an All Projects Category. The provisional results were published on 4 August 2020 and final auction results are expected on 10 September 2020.

The average offer price in the Solar Preference Category was 72.92 €/MWh and the maximum target volume was 300GWh. Notwithstanding the fact that the Solar Preference Category was likely oversubscribed and attracted the lowest solar bids, solar performed extremely well in the All Projects Category as well: with an average offer price of 74.08 €/MWh, solar secured a higher total offer quantity than wind. 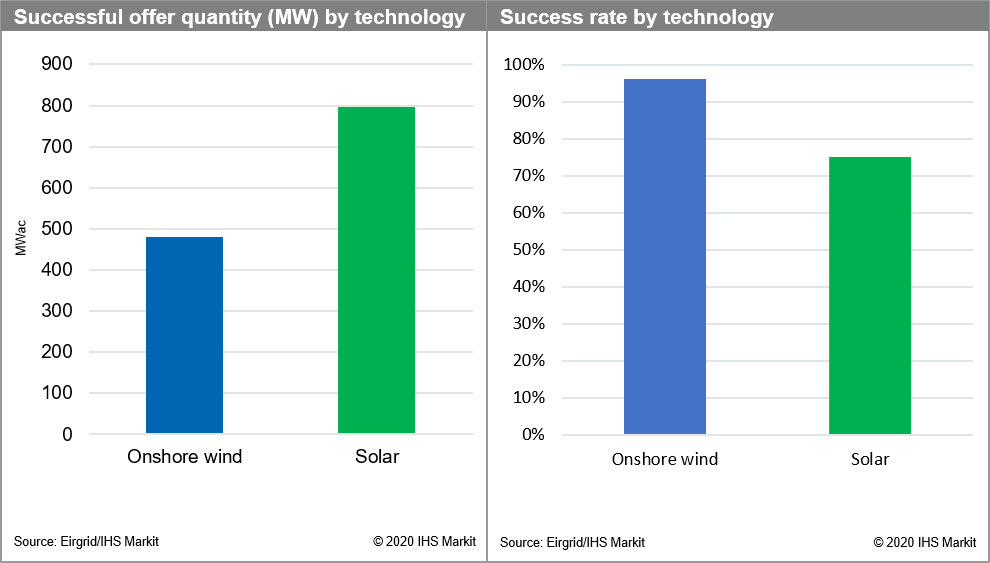 However, onshore wind had a higher success rate than solar, as measured by successful offers (MW), implying that solar participation in the auction was higher. The low onshore wind participation could be due to a variety of factors. Typically, wind has a considerably longer development and construction time than solar, which might not be compatible with the short RESS timelines. The project size of successful onshore wind projects is large: only 32% of the projects are below 10 MW, reaffirming the notion that the RESS timeline could be deemed too short for wind developers with such large projects. Secondly, wind developers in Ireland must abide with a variety of guidelines that have tightened over time, including noise limits and set-back distances from nearest dwellings.

The design of the future RESS auctions has not yet been confirmed and could differ from the first round should issues brought up by the solar industry be incorporated, such as lack of indexation and the fact that force majeure for grid delays cannot be declared. Lastly, the question remains of whether a technology specific category will be part of the subsequent RESS rounds or how large technology specific categories could be in future auction rounds. 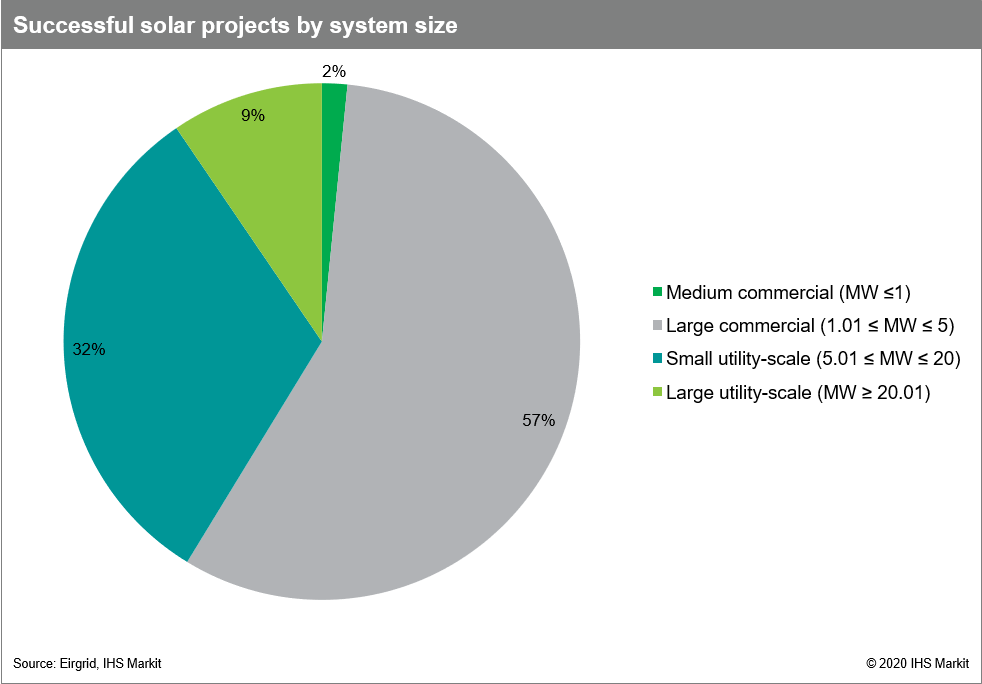 Of the 63 successful solar projects, 59% are projects below 5 MW. This result was expected, as the vast majority of planned PV projects in Ireland are just below 5 MW in capacity. The main reason for this is that generators below 5 MW connected to the distribution system in Ireland do not have any system charges for transmission use. Considering the low average offer price of solar projects, IHS Markit expects that not all provisionally successful sub-5 MW projects will be constructed.

The majority of successful solar PV projects are concentrated in the Southern and Eastern regions of the island as they have the best irradiation levels. Additionally, South-East Ireland is preferred due to the proximity to high population areas and the lower level of renewable generators connected. Specifically, the three top counties for number of successful solar projects are Cork, Wexford, and Meath.

Historically, solar in Ireland has been overlooked as a viable option to reach the country's renewable energy targets. Emphasis has been placed on onshore wind which has been supported by government policy through feed-in tariffs. Grants to households and communities for solar have also been provided in recent years, but there was an absence of comprehensive support mechanisms for utility-scale solar until the (RESS) was introduced in 2019.

Notwithstanding the lack of policy support, the solar industry in Ireland has been in preparation for years. According to IHS Markit's Solar Deal Tracker a global solar project database, there are around 2.5 GW of planned solar projects in Ireland that are ready to be built, with a connection offer or already contracted for connection. With Ireland's new grid connection policy, the Enduring Connection Policy (ECP), it is expected that shovel ready and viable projects with planning permission, amounting to 2.5 GW, will receive the green light to connect to the grid.

IHS Markit forecasts 2.5 GWdc of PV to be installed by the end of 2024

IHS Markit expects the solar PV market in Ireland to start growing in the second half of 2021, as the first successful RESS-1 projects begin construction. The majority of projects will connect in 2022 as the deadline for project delivery under RESS-1 is rather short and is in December 2022. The second round of RESS auctions is expected to be held next year, with project delivery in 2023. Based on the provisional results, IHS Markit expects 2.5 GWdc of PV capacity (including residential and commercial solar) will be added in the next four years, with the greatest total generation capacity added in 2022.

To learn more about the IHS Markit solar research and its updated forecast for Ireland, visit our Downstream Solar PV Service page.

Martina Assereto is a solar market analyst for the Clean Technology & Renewables team at IHS Markit.