Official data brought more news of a growth slowdown in the Malaysian economy, with signs that a combination of a weaker external environment and easing domestic demand is weighing on economic activity.

According to official statistics, industrial production grew 1.7% compared to a year ago in February, down from 3.2% in January. The latest growth was among the weakest since 2015, but broadly in line with economists' expectations.

The average of the first two months of the year for factory output provided a clear look at the underlying trend for industry. At 2.5% so far in the first quarter of 2019, growth is down from 3.5% in the final three months of 2018. The expansion of manufacturing output at 3.9% so far this year was the softest since the third quarter of 2016, painting a picture of weakening expansion in the manufacturing sector. 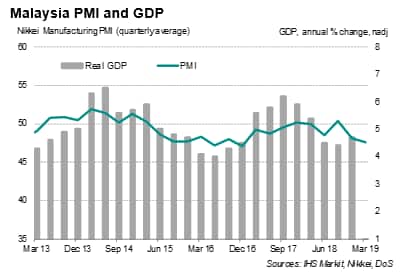 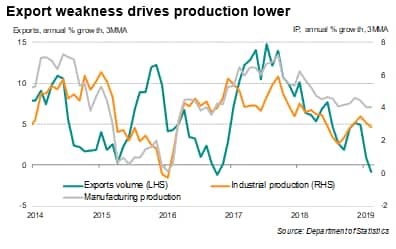 The weakening trend seen in the industrial production data add further to evidence that the Malaysian economy could grow at a slower pace this year. IHS Markit forecasts full-year GDP growth of 4.4% for 2019, down from 4.7% in 2018.

However, when compared against official measures, the PMI is still broadly indicative of the economy growing at an annual rate of 4.0-4.5%, with manufacturing output increasing at an annual pace of just under 4%. (Note that, as with many other fast-growing economies, the PMI indices in Malaysia have to drop much further below 50 to signal either a contracting manufacturing sector or a decline in GDP.) 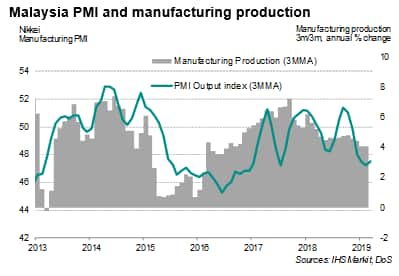 The PMI survey data also bring some encouraging signs for the Malaysian economy, adding to hopes that the recent slowdown in manufacturing will start to ease in coming months. The March survey found companies had become more optimistic about the year ahead, with expectations of future output growth rising to the highest for nearly a year. Gauges of purchasing and inventories also came off recent lows, suggesting companies are starting to plan for improved demand in the coming months.

While there is increasing talk in Malaysia of a rate cut, consistent with a broad shift in central banks' policy stance across the world, we think that conditions need to worsen substantially to warrant policy easing. We continue to hold the view that Bank Negara Malaysia will leave monetary policy on hold throughout 2019.

Nonetheless, the outlook remains uncertain amid trade frictions and weak global demand. Therefore, a close monitoring of economic data in the months ahead, PMI surveys in particular, given their timely release, is crucial.

Global manufacturing output fell for a fourth successive months in May, according to #PMI. While further easing of… https://t.co/So6LGFFEAv

#Indonesia saw a further collapse of manufacturing activity in May, according to latest #PMI data. Output and sales… https://t.co/YqD2HDxqQE

The Dutch manufacturing sector remained mired in a #COVID-19 induced downturn in May. The headline #PMI fell to 40.… https://t.co/R8gn8qaFMu