Will Southern California have adequate natural gas resources available ahead of winter 2019/20?

Storage injections along the SoCal Gas system have been sporadic this injection season (since April 1, 2019) as periods of high demand have coincided with pipeline maintenance work that has limited the system's ability to utilize major receipt points. SoCal Gas inventories began the season down nearly 10 Bcf year over year. Weak demand because of mild weather and the resulting strong injection rates then propelled inventories to a 2 Bcf year-over-year surplus in June, but inventories sank back to a deficit in August after summer demand reached a peak. The year-over-year deficit then widened in September, to nearly a 9 Bcf during the last week of the month.

However, SoCal Gas's year-over-year inventory deficit has been shrinking again since then, following an order issued on September 21 from the California Public Utilities Commission (CPUC) requiring SoCal Gas to increase its gas storage in preparation for the winter heating season.

SoCal Gas's year-over-year inventory deficit has shrunk to less than 5 Bcf as of the week ending October 17, narrowing by 3.4 Bcf since September 21. Nevertheless, inventories are 6.6 Bcf below the 82.1 Bcf target level for SoCal Gas's end-October inventories assessed under a CPUC analysis.

With half of October already in the past and injection rates expected to average 0.15 Bcf/d through the second half of this month, SoCal Gas fields are unlikely to meet the end-October target level. 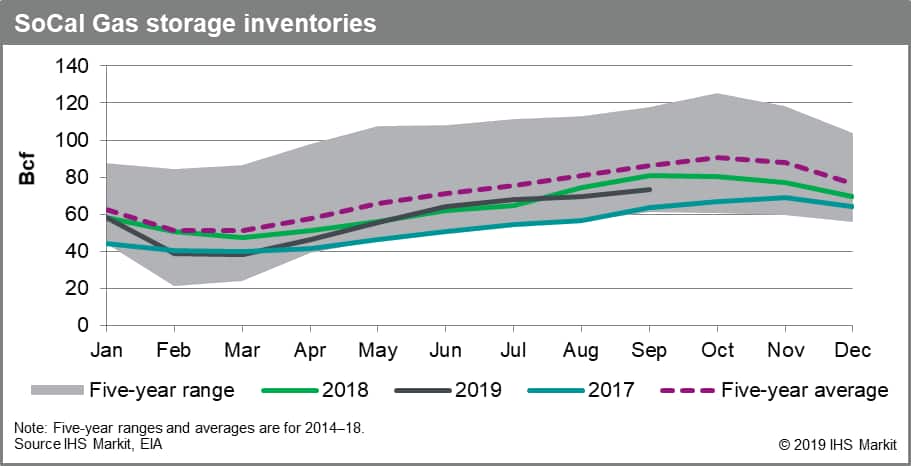 Additionally, SoCal Gas's ability to source incremental gas volumes from the Rockies and Permian Basin has been constrained this month by significant pipeline maintenance work along the system's Northern Zone, which has halted all receipts at Topock since September 19 and is expected to last through November. Furthermore, demand has climbed this month because of emerging heating loads, compounding the tightness on an already-restricted system.

The chart below details daily SoCal Gas receipt activity by zone, with the green shaded area representing gas receipts along the system's Northern Zone, the light blue chronicling the Southern Zone, and the dark blue accounting for flows into the Wheeler Ridge Zone. The black bars show the system's net storage activity, which was averaging about a 0.06 Bcf/d withdrawal during the 30 days prior to the CPUC order. The red line represents daily basis at SoCal Border. Basis has remained elevated since August, when storage inventories returned to a year-over-year deficit. 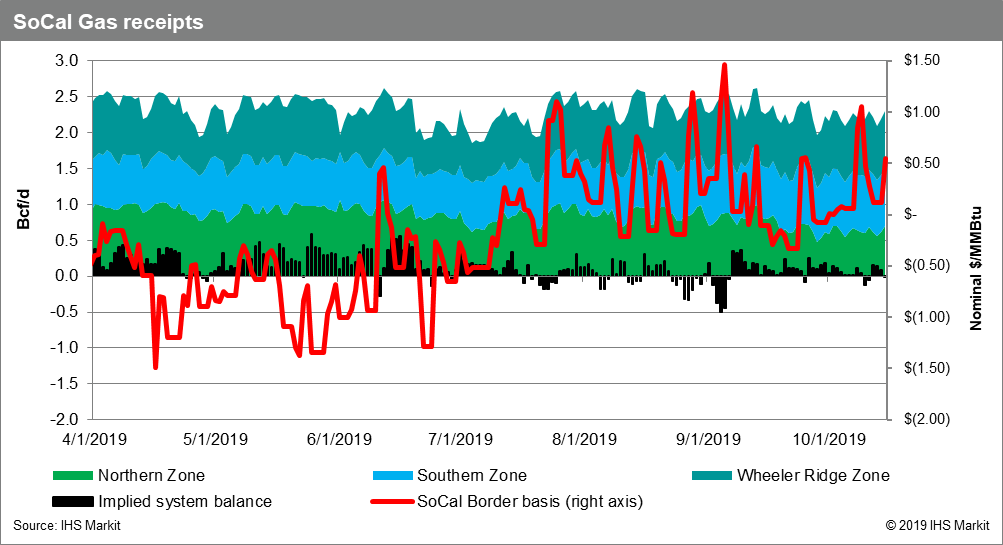 During late August, SoCal Border basis surged to strong seasonal premiums. Since then, SoCal Border basis has averaged a $0.20/MMBtu premium, with the highest premium occurring on September 5, at $1.46/MMBtu, as system demand reached a season-to-date high of more than 3 Bcf/d and as separate (short-lived) maintenance reduced receipt capacity at Topock to 0 MMcf/d.

The current maintenance along the Northern Zone is restricting available receipt capacity moving onto the system. Additionally, with SoCal Gas targeting higher inventories, it does not take much for upward pricing pressure to result in price spikes. With the Northern Zone maintenance, the system's receipt capacity is currently limited to about 2.5 Bcf/d, or nearly 70% of design capacity. Typically, the system flows at 85% of capacity, with this highly utilization making it highly sensitive to capacity restrictions. SoCal Gas has increased capacity at Kramer Junction within the Northern Zone by nearly 0.3 Bcf/d to help source additional volumes onto the system from Kern River Gas Transmission. However, flows have risen by an average of only 0.10-0.15 Bcf/d, leaving the zone short by 0.15-0.20 Bcf/d during the maintenance period. While the work is scheduled to be completed by the end of November, it is likely that the zone would continue to operate at reduced capacity through December-January. In the worst case, receipt capacity at Topock and Needles would remain at 0 Bcf/d throughout the entire winter.

The return of receipts in the Northern Zone will increase system capacity to 3.0 Bcf/d. However, we do not expect this to happen before the end of October, making it very likely that SoCal Gas inventories will start the winter season at a deficit.

As winter 2019/20 quickly approaches, limited receipt capacity will continue to constrain storage injections through November, which likely will keep inventories at a year-over-year deficit and put continued to upward pressure on SoCal Border prices. The system will have more flexibility to use withdrawals from Aliso Canyon to maintain service this winter, as a result of the updated Withdrawal Protocol issued by CPUC this summer. Nevertheless, the start-of-winter storage deficit and possibility of continued receipt restrictions throughout the heating season will challenge the SoCal Gas system this winter.

Callie Kolbe is research and analysis associate director of global gas in the Gas, Power, and Energy Futures group at IHS Markit.

#SouthKorea is struggling to unveil #climate policy that can please both businesses and environmentalists. Read mor… https://t.co/peJKarnoZz

During the #IndiaEnergyForum by #CERAWeek, #OPEC Secretary General Mohammad Sanusi Barkindo sought to highlight the… https://t.co/0T3LZv7hwE