While active-matrix organic light-emitting diode (AMOLED) displays are increasingly adopted for high-end and midrange smartphones, a shift in the panel’s substrate type and touch sensor structure is occurring, going from rigid to flexible, according to the latest Touch Panel Market Tracker Report by IHS Markit.

Overall, rigid on-cell AMOLED panels accounted for 14.0% of global panel shipments for mobile phones in 2017, a significant drop from 20.2% in 2016. Meanwhile, share of flexible on-cell AMOLED displays rose to 6.3% from 2.5% during the same period.

In the case of Samsung’s main competitor, Apple did not adopt the mainstream on-cell touch sensor structure for the 5.85-inch flexible AMOLED panel in its iPhone X. Instead, Apple has continued to use GF2, the same touch sensor structure it deploys in the iPad series. GF2 has a film substrate with a patterned double-sided indium tin oxide (ITO) sensor, located right below the cover glass. In contrast, Samsung Display and LG Display both put the film substrate beneath the display’s polarizer. Because of Apple, GF2 immediately took 3.6% of total panel shipments for mobile phones, causing shipments in 2017 of all flexible AMOLED displays, including on-cell touch and GF2 type, to account for 9.9% of the global total, up from 2.5%in 2016. 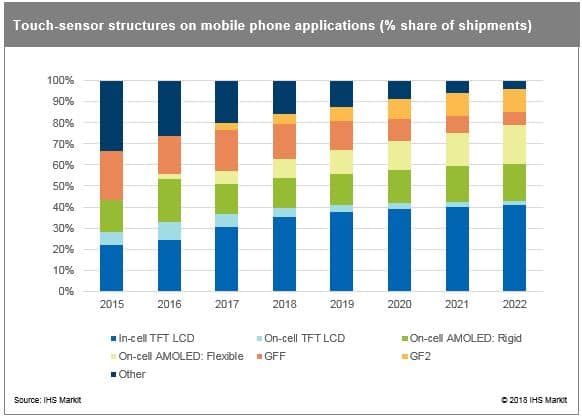 For Samsung Display, a leader in AMOLED display production, what it should do is to speed up the transition to flexible AMOLED display so that it can compete with Chinese panel makers that are expanding capacity fast. Flexible AMOLED technology has become a critical differentiation for Samsung Display as well as mobile phone brands’ high-end models. Despite the two different touch sensor structures, applied to the flexible AMOLED panel, both are expected to keep growing.