The latest PMI data from IHS Markit/CIPS showed encouraging signs of the manufacturing sector's performance improving, but dig deeper into the data and we can see smaller companies are struggling, notably in respect to exports.

The PMI survey's flash data for April showed exports returning to growth after three months of decline. However, the rate of increase remained relatively subdued compared both to domestic orders and export trends seen in many other economies, often linked to post-Brexit trading conditions. Most strikingly, German goods exports have been running at a record high in recent months, according to PMI data, leading to the fastest back-to-back months of eurozone goods export growth on record in March and April. 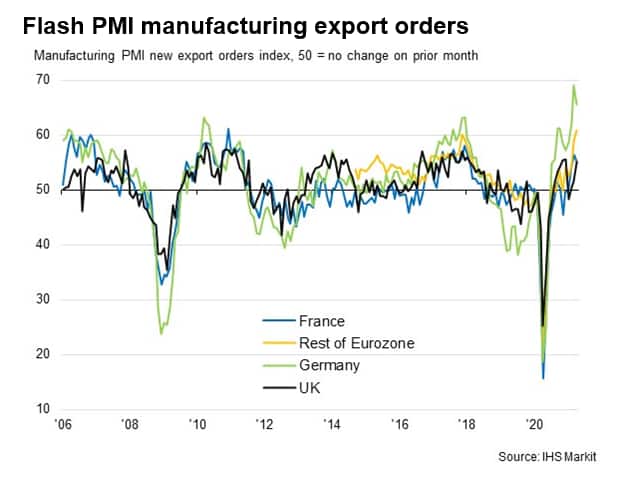 The main area of weakness in the UK's export underperformance can be traced to falling exports at smaller firms, as highlighted by our recent NatWest UK Small Business Recovery PMI®

Whereas small, medium and large sized companies all reported rising exports in the closing months of 2020, in many cases attributed by survey respondents to pre-purchasing of supplies ahead of the introduction of new Brexit-related trade laws on 31st December. markedly divergent trends by company size have been apparent so far this year.

Looking at the first three months of the year for which data by company size are currently available, small firms have seen a steep decline in exports on average, contrasting with an ongoing sharp increase in exports at larger firms.

At 44.1, the average PMI new exports orders index for smaller firms (with less than 50 employees) during the first quarter compared with 47.6 for medium sized firms and a buoyant 58.9 for large manufacturers (with more than 250 employees). Any reading below 50 signals a monthly contraction while readings above 50 signal an increase.

Smaller manufacturers widely noted that new trading arrangements with EU clients had had a severe impact on sales throughout the first quarter. 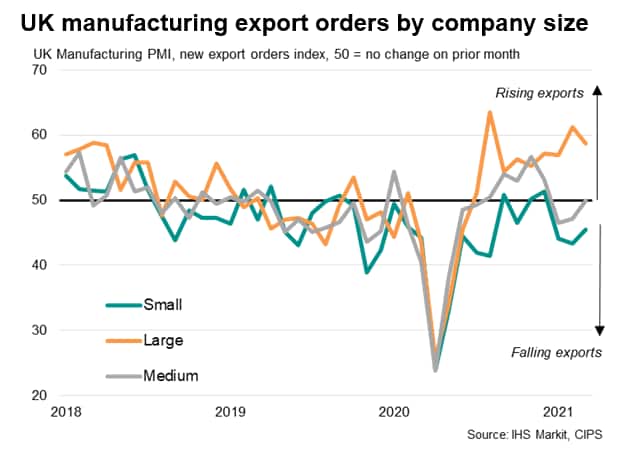 This divergent export performance goes some way to explain why larger manufacturers are considerably more optimistic about the year ahead than smaller producers. While larger firms were the most upbeat for seven years about future prospects, sentiment slipped lower in small and medium sized companies, suggesting this trade divergence could persist into coming months. 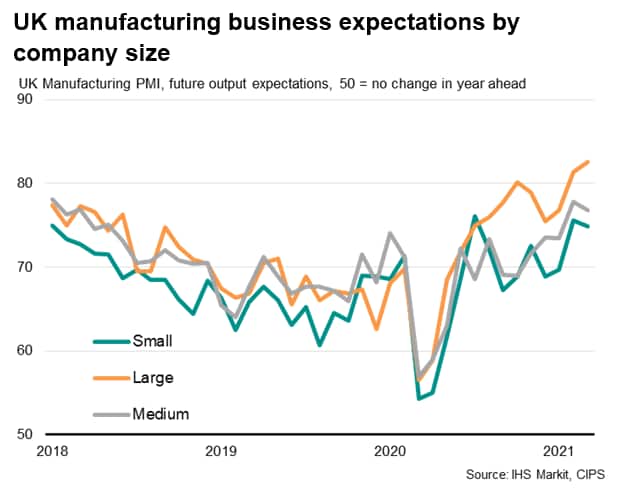