Ongoing global lockdowns and adherence to coronavirus disease 2019 (COVID-19) related social-distancing measures resulted in significant decreases in global consumer spending during April, with consumer goods producers recording the most severe contraction in output since comparable data were first available in October 2009. Despite food stores remaining open and seeing a pick-up in the volume of purchases, food & beverage producers were hit by the continued closure of other businesses such as restaurants. Consumer-facing sectors have been particularly hard-hit by the pandemic, with only healthcare services registering an increase in activity of the industries monitored by the IHS Markit Global Sector PMI™ in April. 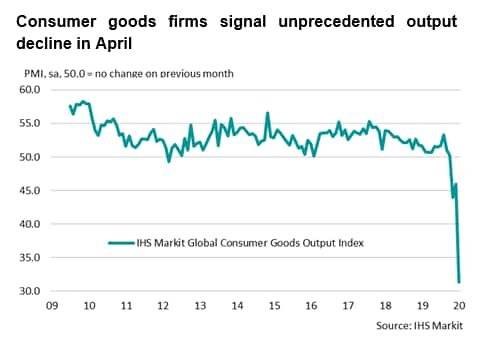 Alongside food & beverage producers, household goods and automotive manufacturers were knocked yet again as consumers reined in their spending amid times of increasing job insecurity and uncertainty, with big ticket items in particular being classed as low priority by buyers. 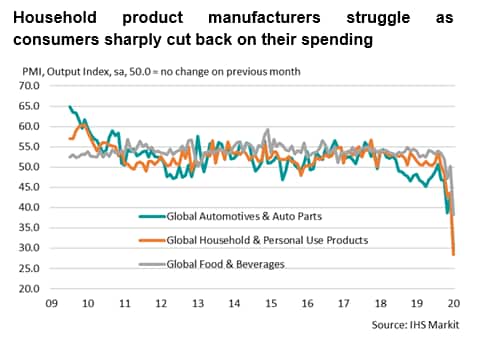 Although a number of countries have recently lifted restrictions on manufacturing such that workers can return to work, social distancing guidelines mean that adaptations to a new way of working could take a while to implement and weak demand will ultimately be a determining factor behind any return to 'normality' for businesses.

Employment suffering as lockdowns are extended

Despite the consumer goods sector not being as heavily impacted by the outbreak when compared to certain services sectors, signals from April PMI data across numerous regions indicate some of the sharpest slumps in employment seen since data collection began. According to April data, the most severe job cutting was seen in Europe, where lockdowns have often been especially strict, and the escalation of the virus outbreak has been swift. Unemployment may worsen sharply over the coming months as furlough or employment protection schemes come to an end and businesses struggle against sluggish demand. Such contractions in employment will lead to further significant drops in household spending as disposable income is squeezed further. 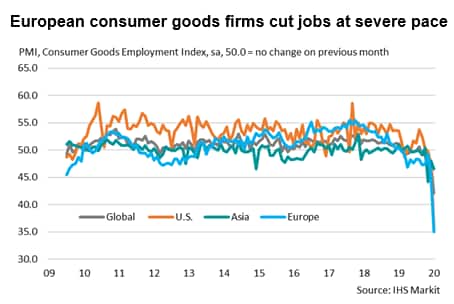 When split into finer consumer goods sectors, global PMI data signalled that automotive producers registered the most significant reduction in workforce numbers during April, with manufacturers of household & personal use goods close behind. As was seen in trends for output, food & beverage firms were supported by the continued importance and necessity of functioning global food supply chains, and therefore recorded a slower fall in staffing numbers (albeit still the steepest on record for the sector).

The evolution of the COVID-19 pandemic from the initial outbreak in China to the swift escalation and detrimental impact on the rest of the world, resulted in a two-stage issue for much of the global supply chain.

First, firms outside of China were hit with mass shortages and longer delivery times as the production of many components from China was put on hold, forcing companies to diversify their supplier network.

Second, and what may turn out to be more crucial, is the problem of demand. Although there may be some pent-up demand following the immediate lifting of restrictions, this is likely to dissipate quickly amid rising unemployment and a reluctance among society to return to previous 'norms' until a treatment or vaccine is found.

As a result, it is likely that vast technological overhauls of traditional manufacturing methods will need to be implemented to ensure worker safety, but also to regain production capacity when demand returns. This is particularly poignant for automotive manufacturers, who were already questioning and assessing the success and sustainability of their supply chains before the COVID-19 crisis emerged.

Such adaptations and technology advancements - which will now be pushed through at a far quicker pace - may lead to an unrecognisable supply chain structure compared to before the virus outbreak in a number of sectors. In the meantime, however, social distancing is likely to lead to productivity losses.

The further lengthening of stay-at-home orders and lockdowns will act as a further drag on consumer spending, with concerns among businesses mounting with each day. Chief among these worries is the longevity of any recovery following the lifting of restrictions on society and firms. April data signalled a growing degree of pessimism towards the outlook for output over the coming year among consumer goods producers, with household & personal use products and automotive manufacturers expecting weakened output as consumer sentiment crashes and export demand sinks across the worst impacted regions, including Europe and the US.

Consumer goods PMI data give a leading signal against official household spending data. The substantial drops in output seen in March and April are expected to translate into severe decreases in household spending through the first and second quarters of 2020. 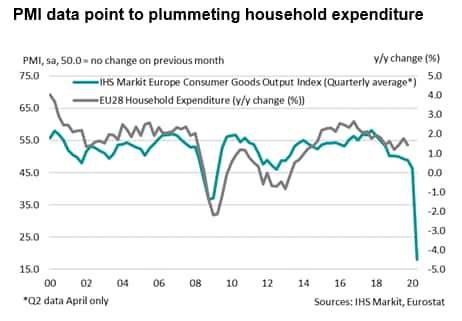 Although times have been challenging for food & beverage producers following the closure of hotels, restaurants and food outlets, governments are striving to ensure food supplies remain stable to support the population and prevent panic buying. Beverage manufacturers have been less fortunate, however, likely due to bars having been hit by lockdowns and shortages. That said, food & beverage manufacturers overall remain confident of an uptick in output over the coming year as any further reopening of the economy will serve to boost production from current levels. 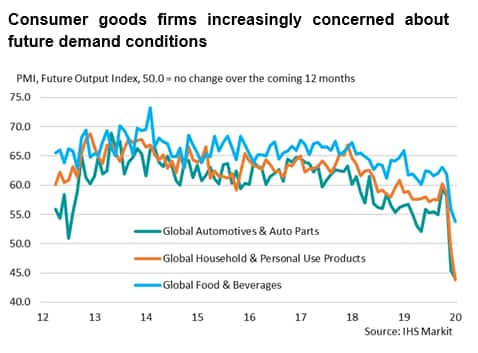