While management teams for every new vehicle brand on sale in the US would like to retain all of their existing customers, realistically this is not going to happen. For various reasons - change of lifestyle or family situation, change in financial resources, unresolvable product or service issue, etc. - some customers will defect to a competitor. The key is to ensure that conquests out-number defections (i.e., the conquest/defection ratio is above one). Among the 42 brands on the market today for which IHS Automotive tracks brand loyalty, only six have maintained a net inflow of new customers in every quarter for the last 21 quarters. These are Audi, Ford, GMC, Maserati, Mercedes-Benz, and Subaru. 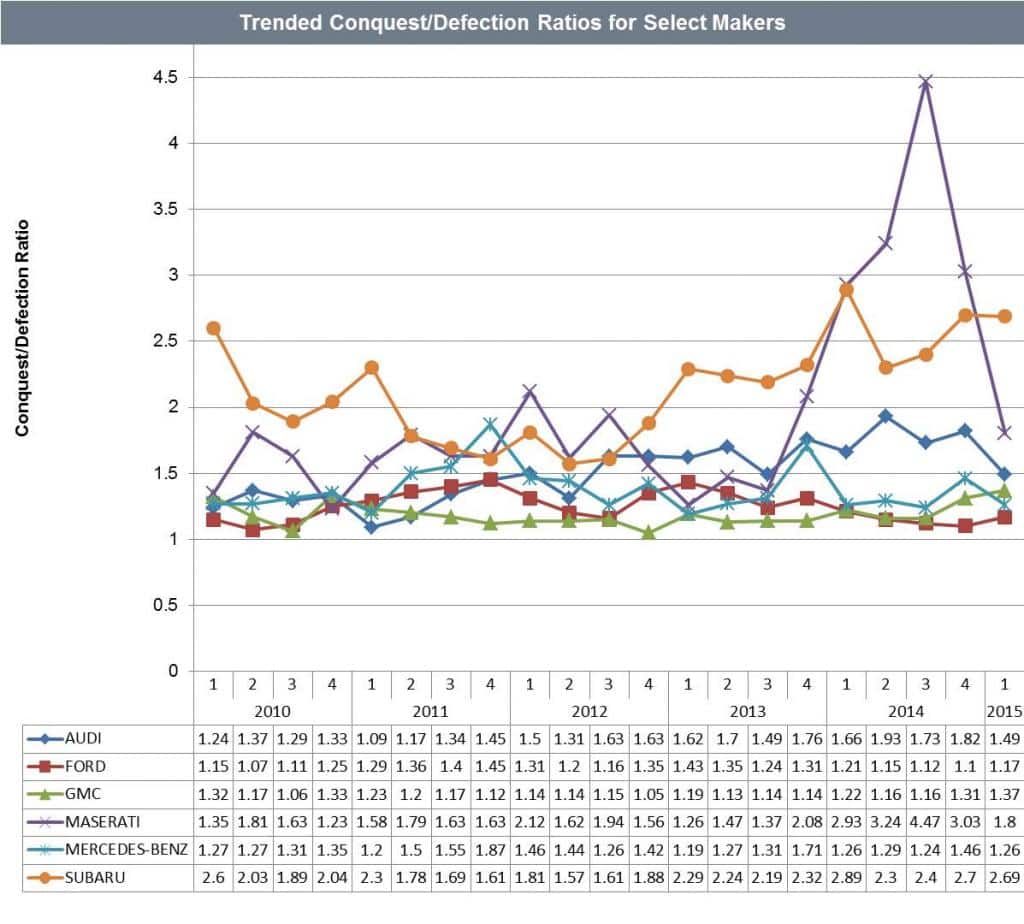 These conquest leaders have maintained a net inflow by doing two things extremely well: bringing to market all-new incremental products ahead of the competition and at a pace exceeding that of the competition, and maintaining retail demand for existing products through frequent freshenings and re-designs, among other things. Incremental products play a large role in determining a brand's net inflow or outflow, since at launch and in the short term thereafter a new product will have virtually no defections.

In the case of Audi, both the Q5 and SQ5 have played key roles: the Q5's C/D ratio was over two through the end of 2014, and the SQ5 has had a ratio over four in each of the four quarters it has been on the market. The A5 and A7 have also helped to drive up Audi's results, with each maintaining a net inflow from 2010 through Q3 2014.

Ford's high conquest/defection ratio has been propelled by the F-Series, Escape, Flex and Transit Connect, all of which have had ratios above one during the entire 5+ year window. Further, the Explorer has enjoyed a net inflow since 2011, and C-Max conquests have more than doubled defections since its 2013 launch. At GMC, three core products including the Acadia, Sierra and Terrain have all enjoyed net inflows throughout the 5+ year window.

Maserati's situation is unique. With only two products until mid-2013, Maserati's reach was limited, focused solely on the very upper end of the luxury market. The launch of the mid-level (relatively speaking) Ghibli in late 2013 changed everything: the Ghibli consistently conquested many customers while losing virtually no one, and at the same time the dynamics of both the Gran Turismo and Quattroporte evolved as well, with both models conquesting many competitive owners while suffering few defections. (The enormous influence of the Ghibli launch on the performance of the entire Maserati portfolio is illustrated by the large spike in Maserati's line in 2014 on the graph above.)

Mercedes-Benz and Subaru both have benefited from incremental products as well. The Mercedes-Benz CLA and GLA have had major net inflows since launch, with the CLA's ratio above 5 for the past seven quarters and the GLA even higher than that since its launch in 2014. The re-designed S-Class has also excelled, with a very positive ratio in each of the last six quarters since its re-design.

At Subaru, the Outback has driven the consistency of the brand's inflow/outflow patterns, with a conquest/defection ratio above 2 every quarter in the 5+ year window. Also, the XV Crosstrek and WRX have had exceptionally high ratios every quarter since they were launched in 2013 and 2014, respectively. The Forester had until late 2014 also attracted many more customers than it lost, but recently its performance has slipped.

Overall, substantial inflows of conquests driven by either incremental products or superior existing products have driven the success of these six makes over the past 5+ years. Further, it is not a coincidence that several of these conquest/defection leaders also rank high in owner loyalty; a brand that keeps its current customers by definition will have relatively few defections, which will drive up its conquest/defection ratio.