Singapore was the first Southeast Asian country to introduce a carbon tax, back in 2018. The carbon price was initially set to S$5/metric ton, applied from 2019 to 2023. The plan thereafter was to increase the tax to between S$10/metric ton and S$15/metric ton by 2030. At the time of its introduction, Singapore had a climate pledge to reduce emissions intensity by 36% from 2005 levels and peak total emissions by around 2030.

The increase in carbon tax, starting from S$25/metric ton in 2024, to up to S$80/metric ton in 2030 will likely raise power prices by between $7/MWh to $22/MWh. This is owing to the relatively young gas-fired generator fleet, around 70% of today's capacity will still be operating by 2030 and remain as the marginal units in the wholesale power market, setting the market price. The wholesale power market price increase will be significant—at around 27%—based on the historical five-year average wholesale power price of $82/MWh and the S$80/metric ton carbon tax, which is at the top of the government's announced range for 2030.

This will put a strain on power consumers and was also one of the reasons provided by the regulator to delay the implementation of a forward capacity market. This is also a cause for concern, as large consumers are currently forced to face both high prices and market volatility as retailers are unwilling to offer fixed-price contracts over the next few years. The government has indicated that they will put in place some transitionary measures to ease the burden for both residential and commercial customers.

As the carbon tax rises to the lower end of the government's 2030 carbon tax range, coupling a combined cycle gas turbine (CCGT) with carbon capture (CC) technology becomes cost-competitive against a standalone-CCGT in terms of its short run marginal cost (SRMC). The carbon tax will support the adoption of low-carbon technology in the power sector. This would be through levelling the playing field for emerging low-carbon technologies, allowing them to compete in the wholesale power market. Financial support from the carbon tax revenue has already been earmarked for decarbonization and can further help the deployment of low-carbon technologies. Continued support for hydrogen blending will be necessary as its SRMC remains at a slight premium over a standalone-CCGT, while CCGT+CC will only require a once-off support as the long run marginal cost (LRMC) is still higher than a standalone-CCGT. Comparing the cost of carbon abatement from both options, the cost per ton of abatement from blending hydrogen is still seven times that of CCGT+CC. 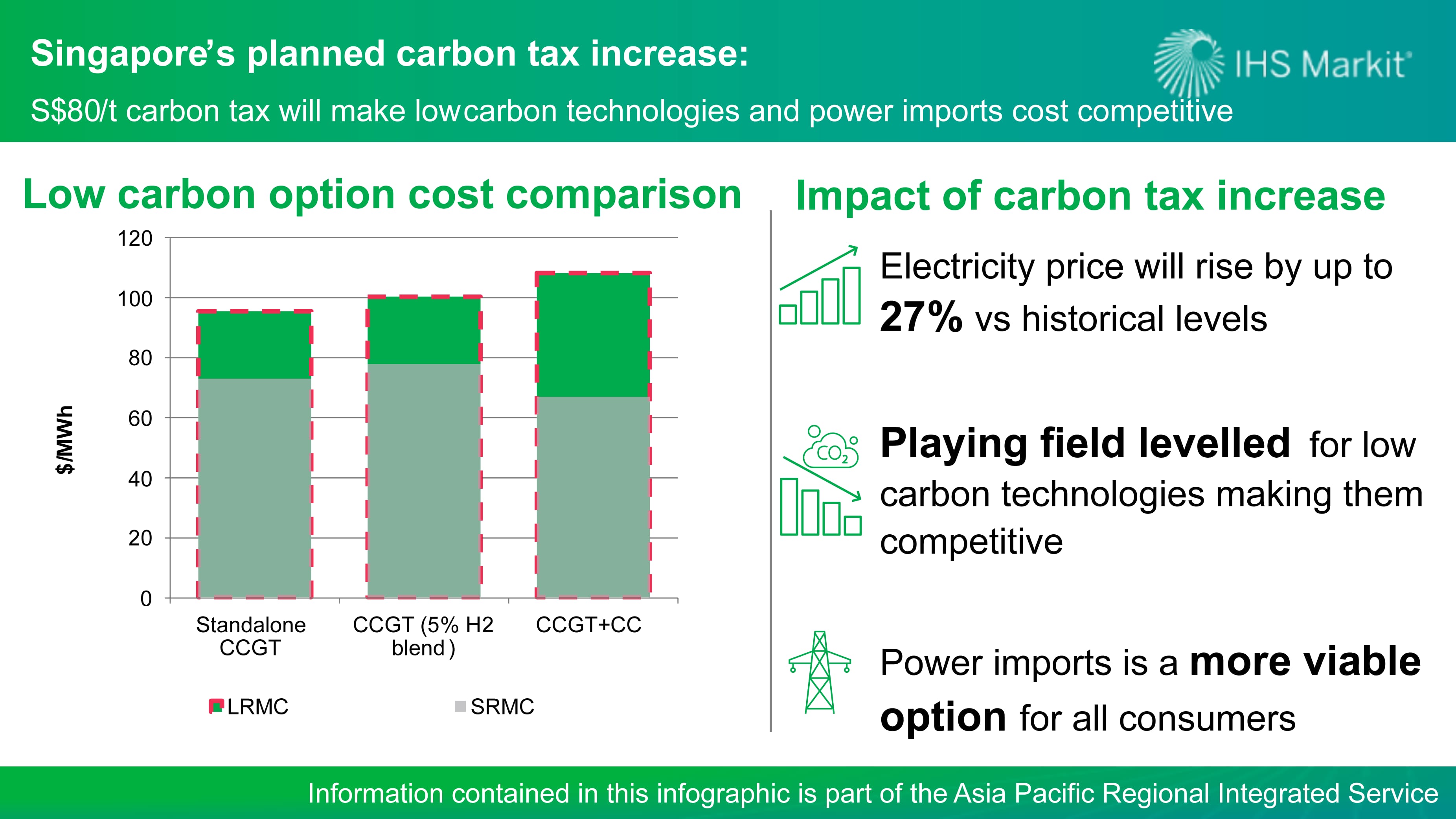 The carbon tax makes power imports a more viable option even for customers without any renewable energy commitments. Without any carbon tax, the landed price of the current proposed power import projects range between $100/MWh and $150/MWh, which is a significant premium over the five-year historical average wholesale power price. Given the trajectory of the carbon tax increase, the difference between the cost from a standalone CCGT and the lowest cost landed power import prices will narrow significantly and the gap will close further when the carbon tax is increased beyond S$80/metric ton post-2030 and provides a good long-term value proposition for all customers to sign a long-term power purchase agreement (PPA) with a power import project. This is because prices will be fixed over a long tenure and are not exposed to fuel price volatility and future carbon tax increases.

Joo Yeow Lee, an associate director with the Climate and Sustainability team, covers the power and renewable markets in Southeast Asia.

Allen Wang, Ph.D., a director on the Climate and Sustainability team, leads Southeast Asia power and renewables research and is the research lead of the Asia Pacific regional integrated service.