SiNATs in Portugal: True HTA reform or just another acronym?

The SiNATS reform represents a significant structural reform to the way health technologies will be evaluated in Portugal. This reform proposal was unveiled by the National Authority of Medicines and Health Products (Infarmed) in July 2014 and then subject to a public consultation until September 2014.

At the time of the unveiling of the SiNATS proposal, Infarmed had invited experts, manufacturers and civil society to contribute to the definition of the regulatory framework behind the evaluation process. As a sideline to the primary research conducted for the Portuguese chapter of our updated and expanded multi-client study on International Reference Pricing (IRP), I subsequently found out that Infarmed and the Ministry of Health was busy preparing the legislation associated with this reform. Details of this study can be found here. The proposed reform is not anticipated to impact the Portuguese IRP system, but will have other repercussions.

Key Proposed Changes
At present, Infarmed uses HTA as a tool to help it decide on pricing and reimbursement (P&R) of medicines through the National Healthcare System (SNS) as well as to control and limit expenditure. This is based on relative effectiveness (to ascertain added therapeutic value) and cost-effectiveness (to estimate economic value of the medicine), as delineated in the table below.

With expectations of an implementation during the course of 2015 and development in a progressive fashion, the SiNATs is expected to evaluate drugs and medical devices. In line with the proposal, ex-ante evaluation will still be used but preference given to contract-based financing agreements. Also, amongst other aspects, this evaluation is expected to assess feasibility of risk-sharing agreements and the need of additional monitoring of medicine use. Another novelty is the participation in the HTA model being developed at the EU level with the aim of conducting joint assessments to avoid duplicated effort and waste of financial resources.

But a major crucial change under SiNATs is the use of HTA for an ex-post evaluation, i.e. in the re-evaluation of already funded health technologies. This re-evaluation of existing technologies compared to alternatives will be based on information supplied by manufacturers and, for the first time, on effect on patient data. It is anticipated to start in therapeutic areas with national registries of SNS treated patient data, including oncology and HIV/AIDS. 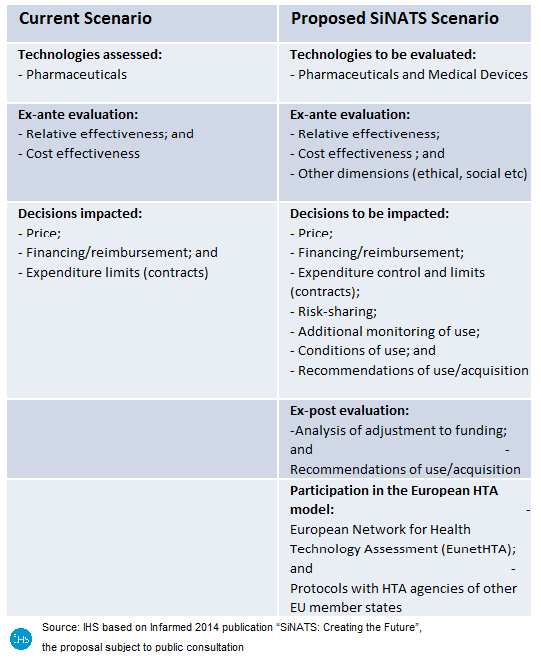 As outlined by the proposal, the eventual implementation of SiNATS could result in additional delays to the evaluation and decision-making during the P&R process. This is particularly true for branded hospital-only medicines, including those inherently expensive for cancer and rare diseases. However, during the unveiling of the system, Infarmed highlighted they eagerness in breaking this trend through an accelerated evaluation route for innovative medicines with promising outcomes.

Without a budget to increase headcount, doubts remain if Infarmed has the capacity to take on the new responsibilities outlined in the proposed system. There is also concern regarding the independence of the whole system because credibility will only improve with a clear separation of the evaluation and reimbursement decision processes. It remains to be seen whether this can be truly guaranteed with the creation of the HTA Commission (CATS) that will gather the external experts used by Infarmed. But the bigger question marks revolve around how and when the SiNATS proposal, following contributions from key stakeholders, will be transformed into legislation