Significant security consequences that could take place in 2017

Social disconnect trend: Arguably the most important development in 2016 was the consolidation of social disconnect in Western and other developed democracies as a force with the ability to bring about profound change. This phenomenon - broadly, citizens' feeling of growing estrangement from their political and economic elites - was illustrated in two events that will shape the global security outlook in 2017 and beyond: the UK's referendum vote on 23 June to withdraw from the European Union, and the election of Trump as president.

The victory of Donald Trump in the US presidential election on 8 November defied the predictions of pollsters and analysts in the most significant upset in the modern history of the United States. It helped to define 2016 as one of the most disruptive years of the post-Cold War period, marked by events such as the UK voting to leave the European Union, Russia upscaling its military involvement in Crimea and Syria, a wave of attacks in European cities previously untouched by Islamist terrorism, North Korea intensifying the pace of its nuclear device and ballistic missile testing, and a failed coup and government crackdown in Turkey.

Thematic threats trend: Given the intent and capability of terrorist groups, an increasing risk of nuclear weapons use, and technological innovations placing advanced capabilities in the hands of non-state actors. 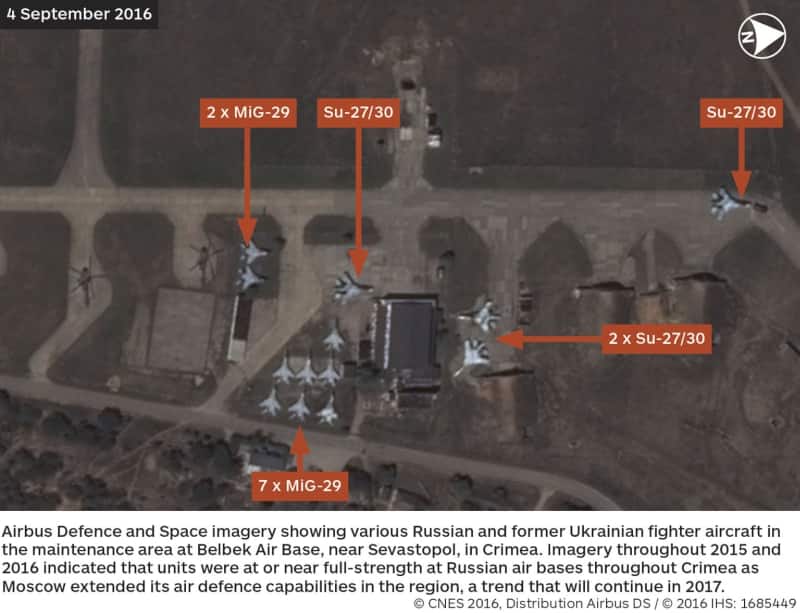 Evolving warfare trend: A security trend where a marked consolidation occurred in 2016 was in the prosecution of warfare - both in the physical battlespace and the cyber-domain - by state and non-state actors. Many national security doctrines now explicitly hold that cyberspace is simply an extension of 'real world' conflict theatres: even as states publicly discuss the merits of establishing cyber norms of íbehaviour (such as in the UN Group of Governmental Experts), they covertly develop, maintain, and deploy offensive and defensive cyber capabilities.

Below - Pro-Russian militants gather in front of the home of Ukrainian tycoon Rinat Akhmetov in Donetsk, eastern Ukraine, on 25 May 2014. An overarching driver behind new concepts of warfare is deniability.

Changing alliances trend: After the fall of the Soviet Union in 1991, NATO's purpose was called into question. In the wake of the 2001 terrorist attacks on the US, it sought to reorient itself towards tackling security threats such as terrorism, but also other non-state threats such as people smuggling. This trajectory changed again, initially following the Russian invasion of Georgia and then sharply following the Russian invasion of Crimea using deniable warfare, both of which led to shifts in de facto borders. By the end of 2016, NATO was again positioning itself primarily as a collective defence alliance to deter Russian aggression in Europe.

How the world looks at the end of 2017 will largely depend on the actions taken by one man in the early months of the year. With the US facing the greatest challenge to its superpower status since the era of the Soviet Union, Trump's policy decisions in the earliest days of his presidency will shape the direction that many events take in 2017. Yet Trump will take up the presidency as a largely unknown quantity in foreign and security policy, with no legislative voting record, military or diplomatic service, policy white papers, or history of engaging with world leaders.