April came in like a lion and tore the bear to shreds. Over the four weeks of April 2020, highly shorted US equities outperformed those with lower short interest by the most on record for any month. That statement holds for a variety of measures of short interest (borrow cost, utilization of lendable shares, borrowed shares as % outstanding, exchange SI % outstanding). It is also true for a US equity total market capitalization universe, as well as large and small cap in isolation. Other contenders in "worst month for shorts" include April 2009 and April 2016. The most hard-to-borrow (HTB) US equities outperformed the average returns for the rest of US equities by 9% in April, a harsh snapback after HTB only managed to underperform by 2% in the March crash. 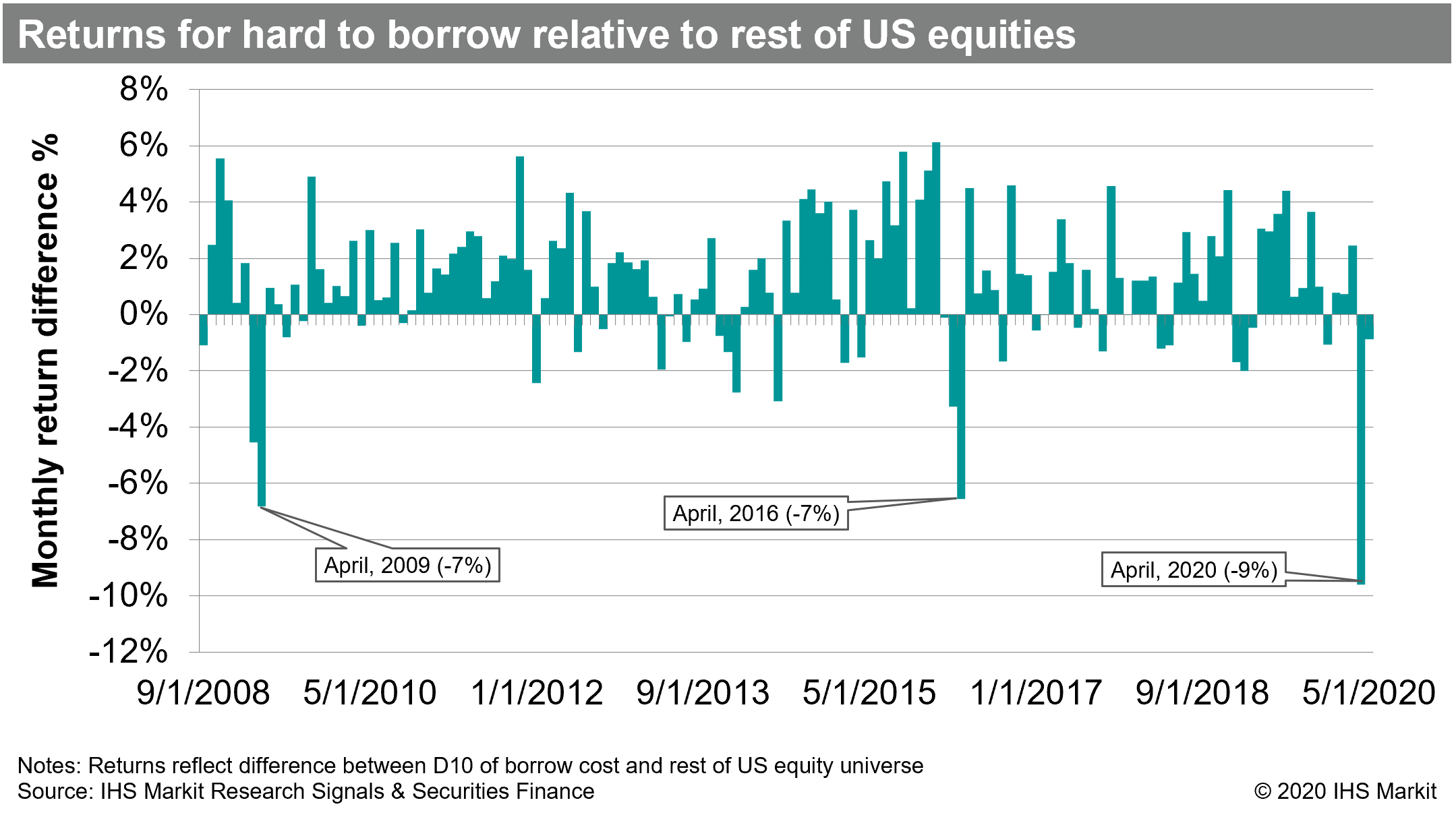 As noted in our Q1 webinar, the US equity short interest in dollar terms fell with the market in the first quarter, with the short interest observation for March 31st ($595m) the lowest level since 2014. The decline in short interest reported by the exchanges was double the decline in US equity value on loan reported by IHS Markit Securities Finance. That gap is justified by a reduction in internalization by dealers and increased borrowing for ETF creation. The reduction in internalization was interpreted as likely being related to hedge fund deleveraging. Seeing the short interest value decline by roughly the same amount as the broader market suggests that there wasn't any significant increase in short selling during the crash.

In the May 2020 Financial Stability report the Federal Reserve Board noted that although dealers had reported, in the March Senior Credit Officer Opinion Survey on Dealer Financing Terms, "that the use of leverage by hedge fund clients was about unchanged in the fourth quarter of 2019 and the first quarter of 2020," that subsequently "hedge funds reportedly reduced their leverage significantly as market volatility rose and many hedge funds experienced margin calls." A reduction in hedge fund leverage reduces the supply of shares that dealers can source internally to settle short positions; Short interest increased by 23% in April, while the value on loan only increased by 13%, which may reflect hedge funds starting to increase gross exposures again (which in turn increases internal supply and reduces the need to borrow externally to settle a short sale).

Being long a stock with significant short interest whose price increases on a parabolic trajectory seems like a good time, particularly coming out of a market crash. Following that experience, one might reasonably look for other such opportunities, which may be the current collective mindset of short-term traders at present. Over the last six weeks, the market has rewarded betting that crowded shorts will outperform. Instances of HTB outperformance have generally been brief, however there have been two previous three month long periods of outperformance since 2008, so while the scale of April is extreme, the duration of this HTB rally is not (yet). The prior two times HTB equities outperformed by as much as they did in April, the preceding month also featured outperformance and was followed by at least two months of the typical underperformance of HTB (gross of fees); Through the first three weeks of May, HTB equities have continued to outperform by 0.8% on average. Two sectors which have seen increased share borrowing in May include airlines and cruise lines, which have been particularly hard hit by the COVID-19 shut down. Some of that increase in shorting likely reflects directional short bets and sector hedges, however the issuance of convertible debt is also a demand driver.