Looking to the last week of October, there have been some minor changes in positioning for the most shorted stocks, but much like the rest of the market, the reaction to the sell-off on the part of short-sellers has been somewhat muted. This makes sense given the price action following sell-offs in recent years, which has prompted the mindset of arriving late and leaving early when short selling, particularly in the US.

In that vein, both B&G Foods and Diebold Nixdorf, which both report this week, have seen marginal upticks in equity short demand over the last couple weeks, however short interest remains well below YTD highs. While equity shorts marginally reduced positions, there was a significant covering in the bonds issued by both firms during the quarter. 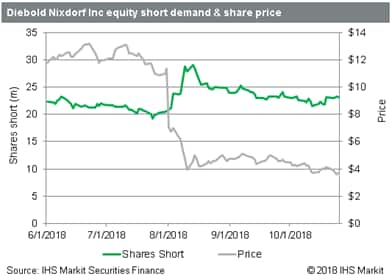 Given the relative underperformance of both firms' equity shares YTD, the net covering in the quarter combined with a small punt into the earnings reports suggest equity short sellers don't see a significant upside risk, even if after the stocks have traded down. Shares of DBD are down 67% since they last reported, while BGS shares are down only 14%. 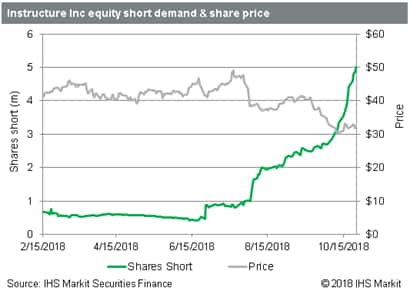 Instructure, a Salt Lake City based online learning firm, also struggled in the quarter with shares down 28% since the firm reported Q2 results on July 30th. Short sellers added to their positions throughout the quarter and put on a further 1.7m shares in just the last two weeks.

Looking at highly shorted stocks reporting earnings in Europe this week, short sellers have continued to move away from Aixtron, with short interest decreasing from a peak of 20% of shares outstanding on August 15th, down to the current level of 16.2% ahead of earnings on Tuesday. During that span, the share price has declined over 25%. Short exposure remains elevated, with AIXA in the top 20 most shorted EU stocks. With the shares already 60% below the YTD peak observed in March, there has been little desire to press on short positions as shares hit 52-week low on October 24th.

Gea Group has seen a marginal uptick in shorts in recent weeks, while the share price has declined over 25% from the Q3 peak in early August, and is another case of shorts sticking with positions but refraining from adding in a significant way on share price weakness. 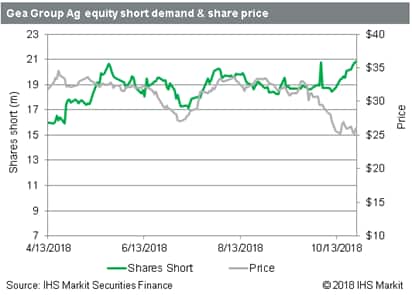 Short-sellers have added to positions aggressively in Samsung Electro-Mechanics ahead of their earnings report on October 31st. So far in October, the short position has increased from 2.5% of free float to 15.5%, an increase of just over 7m shares. In that time the share price has decreased by 18.8%. Translated to USD terms, the short position has grown from $171m to $911m, despite the decline in share price. 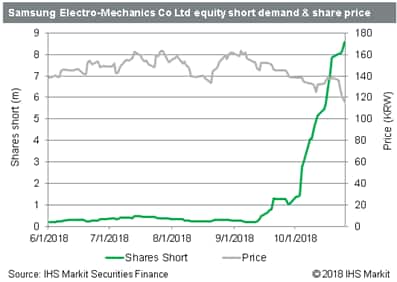 While less extreme, short sellers have also increased positions in the Samsung Electronics parent company as well as Samsung Biologics, with the latter having the larger percentage of free float short (10%) and the larger nominal short balance ($570m).

The equity new issuance market had an unprecedented year in 2020, pricing a record 1,500 deals that raised a combin… https://t.co/Iyd6bSBUKJ

2020 had a profound impact on corporate actions, from cancelled dividends to postponed mergers and acquisitions. R… https://t.co/GBDmtcSQqS