A key development for the US Marijuana industry came on April 13th, when President Trump confirmed he had promised Colorado Senator Cory Gardner that US AG Jeff Sessions revocation of the Cole memo will not affect the state's legal Marijuana industry. That was a very timely update, with the combined market cap for Marijuana related stocks hitting a 2018 low on April 9th. Since then the market cap of those stocks has risen by $3.4bn, a 13% increase.

Short sellers have not backed down, increasing the combined short position in Marijuana related stocks to nearly $2bn, a level just below the all-time high on January 24th. Since that last high point in short positions, the total market cap has fallen by $5.5bn, or 15%. Short sellers have generally increased positions on a lag to advances in share prices, but have kept up the overall pace with the total market cap increasing by 92% since the start of Q4 2017, while short balances have increased by 102%.

A list of the most shorted Marijuana stocks is also a list of those with the largest market caps, a reflection of the capacity challenges for short sellers, which have contributed to elevated borrow costs, particularly at the start of the year. While the sector has been fertile ground for short sellers, it's worth noting that the rally in Canopy Growth shares over the last week, which put them back in positive territory for the year, means that two of the four largest short positions have greater than 10% share price gains YTD.

On June 7 Canada's Senate will vote on bill C-45, legislation which would make the recreational use of Marijuana legal throughout the country, in essence regulating recreational Marijuana use in a manner similar to tobacco. The road to recreational legality in Canada received a boost on March 23rd when a group of Senators who opposed the bill were unable to muster the votes to prevent the bill from reaching this final stage of legislative approval. The market reaction to the March 23 vote was somewhat muted, which was partly due to the volatility in global markets at the time, with the S&P 500 hitting a YTD low the following week. Also unhelpful, from a sentiment perspective, was a letter to US Attorneys from Attorney General Jeff Sessions, dated March 20th, which proposed greater use of the death penalty in large scale drug prosecutions. While the letter was ostensibly in regards to opioids, some viewed it is an extension of his dim views on recreational Marijuana, which led him to rescind the Cole memo in January. The Cole memo was an Obama era direction from the deputy AG Robert Cole stating that the Justice Department would not expend resources enforcing federal Marijuana laws in states which had some form of legalization.

With the revocation of the Cole memo, Jeff Sessions may have actually aided in the pro-legalization effort, causing congressman and governors from states which currently have legalized medical and/or recreational usage to dig in, ultimately eliciting the promise from Trump mentioned at the outset. With the legislative path in the US and Canada looking increasingly clear, and with a near term catalyst in the June 7th vote, there may be further room to the upside for the group.

There is, however, the matter of the valuations. With Canopy set to report Q4 and FY 2018 earnings on June 27th, the current $6bn market cap equates to nearly 20x analyst's forward revenue estimate of $330m for FY 2019. That valuation clearly assumes future growth, and a lot of it. Short sellers currently have a $440m bet that valuation is unjustifiably rich, though the position has been trimmed by 1m shares, or ~5%, in the last two weeks. The rally of nearly 19% over the last week was partly the result of the firm announcing on May 14th that they expect their shares to be listed on the NYSE by the end of May. 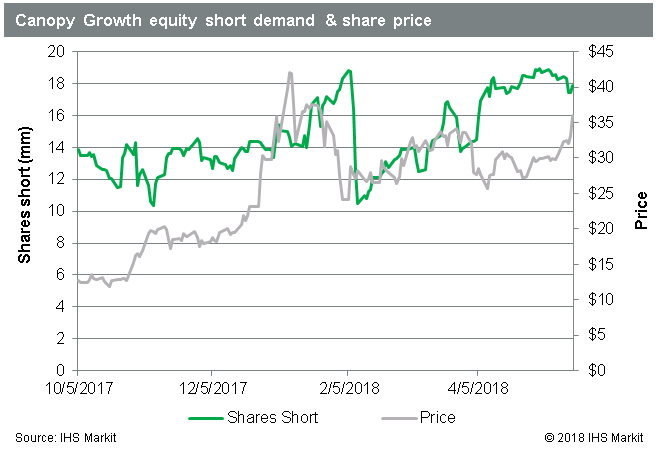 Short sellers have dramatically increased bets against Aurora Cannabis, a Canadian grower which Citron Research described in a tweet: "You must be high buying Aurora, which sports Enron style accounting and is the weakest player in the group". Since that tweet on January 3rd short sellers have increased short positions by $121m, or 82%, while the share price has declined by over 30%. The share price did not react in any significant way to the news last week that the firm plans to acquire Medreleaf in an all-stock deal worth $2.5bn, though short sellers did add another 1.5m shares to the short position, potentially spread against longs in Medreleaf shares. 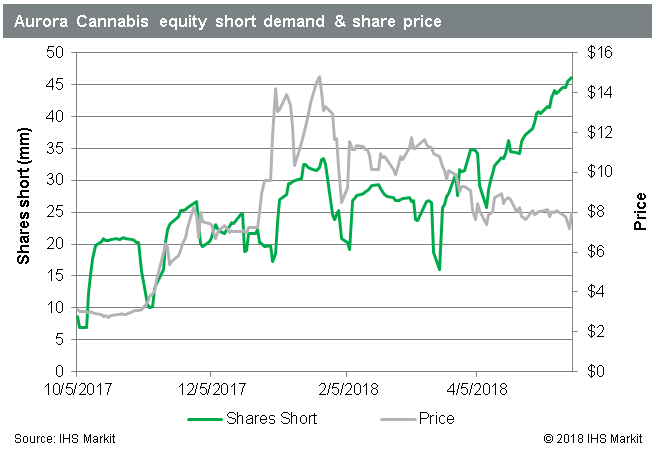 Marijuana related stocks remain highly shorted on valuation, ahead of what appear to be green pastures from a regulatory perspective. The shares are in many cases priced for perfection (or beyond); though from a short seller's perspective those prices may be rational after a consideration of borrow costs. A known catalyst on June 7th may prove a further tailwind as these stocks continue to rally off the lows, however short sellers have shown little fear of a further breakout, with total short balances nearly back to the January high over $2bn.

As a parting thought: One correlation which may be starting to break down is that between the Marijuana related equity market cap and the price of Bitcoin, that other popular long you may recall from Q4 2017. While the chart suggests a stark divergence over the last week, QTD the returns are pretty similar with BTC up 16% in Q2, while the Marijuana related market cap is up 13%. 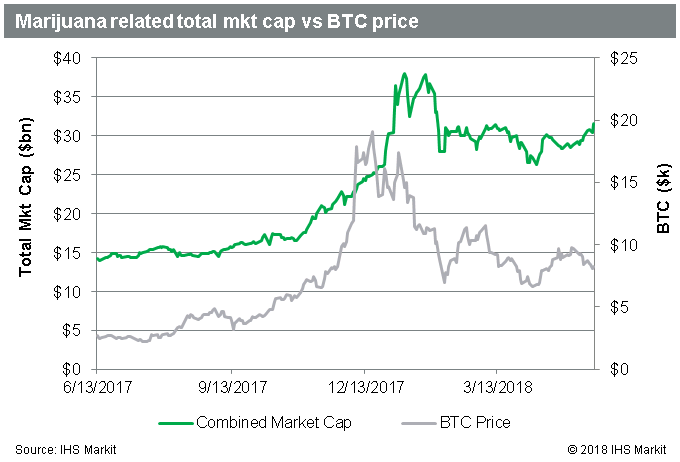 References to Marijuana related equity market cap include 40 stocks which have an exposure to the industry, though it excludes stocks which primarily derive their revenue from tobacco.