Shares of Tesco Plc have traded up 23% YTD, as the turnaround under CEO Dave Lewis gathers steam. Short sellers have substantially covered their position in the UK's largest grocer, with shares short declining 89% in 2018. Roughly a third of that position, ~200m shares, was linked to an arbitrage trade regarding the acquisition of Booker and was closed out on consummation in early March. A further 200m shares were covered over the next month leading up to the firm's earnings report on April 9th, the positive results of which caused another 50m short shares to be covered. Since then the upward price trend has caused the majority of remaining shorts to cover, however there has been a marginal uptick of 15m shares short since the TSCO price reached a YTD high on August 10th.

While the Tesco turnaround has certainly been positive for shareholders, it pales in comparison with Ocado Group Plc, shares of which are up a massive 168% YTD. The online-only grocer's performance has given short sellers cause to cover, reflected in a 75% YTD decrease in shares short. The short covering trend began in earnest after the face-melting 65% share price rally which accompanied the firm inking a deal with US grocer Kroger. The deal allows Kroger to leverage Ocado's robotics technology in the aim of competing with Amazon in the online grocery delivery business.

After Ocado, the next best performing UK grocer in 2018 has been J Sainsbury, whose shares are up 39% YTD. Following the rally in early April, short sellers started to cover, with the current 185m shares short reflecting a 37% decline from the start of the year. In a similar vein, the 22% YTD rally in Wm Morrison shares has inspired short sellers to cover 51% of the short positions they had on at the start of the year. 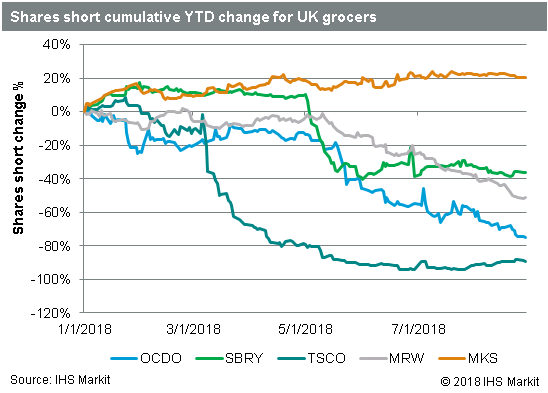 The outlier is Marks & Spencer, which is still down 3% after a rally off the YTD low in April. Short sellers have stayed the course, increasing the shares short by 21% YTD. The stock has likely benefitted from the rally in other UK grocer stocks, however if the price continues to rise the shorts will be faced a challenge in deciding to stick with the position. 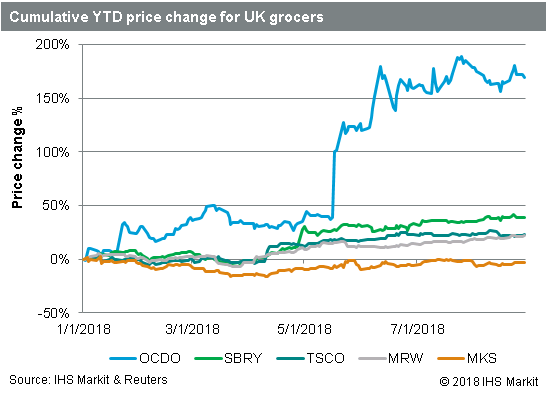 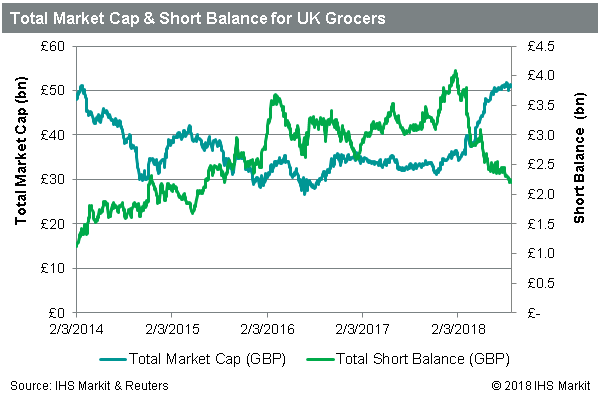 Join us as we discuss the application of Option Pricing Model (OPM) Backsolve since it has gained more traction in… https://t.co/r7cEfUrL8W