As we all turned the calendar to the year 2021, many shared a sense of optimism about the prospects of a new year. The high efficacy rates and increasing distribution of multiple COVID-19 vaccines were expected to eventually help reopen economies and jump start the sense of a "new normal." But as demand began to recover in a big way, optimism was soon tempered as supply chains faltered publicly through some significant high-profile events: the Suez Canal blockage, U.S. West Coast port congestion, skyrocketing prices for raw materials, and the Yantian port congestion bottlenecking mainland Chinese exports. Some progressive companies have reportedly turned their innovative talents upstream to the supply chain in search of creative navigation amid these logistics challenges.

Yeti (YETI Holdings, Inc) is a drinkware and cooler brand popular among U.S. consumers. The company is based in Austin, Texas, United States. Its CEO Matthew Reintjes commented May 13, 2021, according to the Q1 2021 earnings call transcript, "We have a global supply chain from kind of now almost many points of the world across all of our products. I think - and as it relates to bags in particular, we previously talked about how those were products that we moved out of China primarily into other markets in Southeast Asia."

In March 2021, Bloomberg reported how Yeti was considering a few other alternatives to streamline its supply chain and avoid shipping-related delays. These included importing via the Port of Houston rather than the traditional ports of Los Angeles and Long Beach, experimenting with "different" and "faster" shipping lanes out of Southeast Asia and employing the practice of cross-docking to speed imports faster through ports, according to Yeti's senior vice president and CFO Paul Carbone.

Around the time of Bloomberg article publication, the elevated and sustained rates of container ship congestion off the major U.S. West Coast ports of Los Angeles and Long Beach waiting to unload was being widely reported, only to be overshadowed by the Suez Canal blockage at the end of March 2021 before Los Angeles-Long Beach returned to center stage with the congestion worsening.

IHS Markit PIERS allows analysts to observe the timing of these types of shifts for several countries, including the United States via bill of lading records that capture the nature of individual shipments, commodities, carriers, intermediaries, and often the foreign and domestic companies on either side of the supply chain. Other companies may scrutinize these records to determine whether these shifts are sustained or merely temporary, and therefore draw conclusions about whether such efforts are more successful in speeding products to market and for which types of commodities, geographies, and market conditions.

However, there can be limits to the precision of such bill of lading analysis. For example, companies can redact their identity with the U.S. Customs by applying to be on a restricted list exempt from the Freedom of Information Act (FOIA), which allows this data to be made publicly available. In those cases, the identity of one or more companies involved with the shipment is intentionally obscured, although the other details about the shipment remain intact (countries of origin, weights, commodity descriptions, U.S. ports of arrival, etc.).

Yeti may be on this restricted list, as searches for shipments by company name render no results. However, by searching against other fields for specific keywords (such as "cooler" or "stainless steel vacuum flask") or brands (such as "Yeti"), records are found that could possibly be related to the company.

The resulting records for these types of keyword searches render very similar commodity descriptions from shipment to shipment, possibly suggesting that they may come from the same shipper. In some cases, there is a "Marks Description" field that possibly identifies a corresponding brand name from the bill of lading:

Using this method, the majority of these particular U.S. import shipments 2021 YTD were imported via Los Angeles-Long Beach. However, one such shipment suddenly arrived at the Port of Houston on May 20, 2021, followed shortly thereafter by 14 more shipments distributed on five total vessel voyages throughout the month of June: 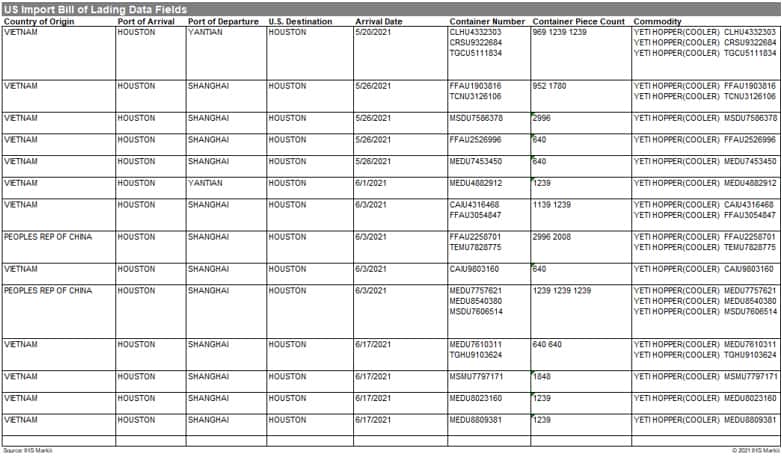 An official inquiry to Yeti to ask about its initial results of any such logistics shifts, as well as whether or not they will be sustained, is still pending response at the time of this writing.

Notably, the "Port of Departure" for some of these records was the mainland Chinese port of Yantian. Yantian temporarily ceased operations in early June reportedly due to a COVID-19 outbreak in the region before resuming operations on around 23 June. In that instance, ballast vessels waiting to load were not being allowed into port until the port operations resumed. Of course, any Yantian-loaded vessels destined for Los Angeles-Long Beach likely encountered congestion again upon reaching their destination and waiting their turn in line to discharge.

Between the Suez, U.S. West Coast, Yantian, and even blockages of Australian coal into China, the disruptions have been attributed to diverse range of causes, including a grounded ship, strained infrastructure, COVID-19 outbreaks, and geopolitical tensions. Regardless of their respective causes, these types of events continue to challenge a streamlined flow of goods from origins to destinations across the globe and therefore impact dynamics of supply and demand, freight rates, and even inflation.

Even sophisticated and committed companies may struggle to cope in keeping their supply chains running to populate retail outlets with their products, not at all ideal leading up to popular peak seasons like back-to-school and Christmas. Transparency into these logistics flows via maritime and trade intelligence can help such companies to track rates of disruption and recovery and alternate strategies to ease the strain.