This time last year Romania appeared to be considering a blanket ban on hydraulic fracturing. Demonstrations against hydraulic fracturing in neighbouring Bulgaria had prompted the government there to impose a moratorium and from February 2012 the protests began to spread across the border. At the time, Romania was undergoing a period of social and political turmoil, which saw the Ungureanu government defeated in a vote of no-confidence, leading to the establishment of Victor Ponta as Prime Minister. Although no legislation was passed, the Ponta administration quickly introduced a draft ban on hydraulic fracturing in response to the protests. The pressure groups declared victory and US super-major Chevron unilaterally declared it would refrain from using unconventional drilling techniques for the time being.

More recently Romania's government appears to have undergone something of a change of heart. Ponta's coalition, known as the Social Liberal Union, won a decisive victory in December, yielding a two-thirds majority across both houses of parliament. Buoyed by this result, the Ponta regime has performed an about-turn on hydraulic fracturing and has made clear that it intends to pursue unconventional hydrocarbon resources. A flurry of statements and interviews at the beginning of the year emphasized the importance of cheap energy supplies as a means to boost the economy, and in early February, Chevron was awarded a zoning certificate, to explore for unconventional gas reserves in the eastern part of the country.

The move was initially greeted by a resumption of protests, although these appear to have died down a little since. IHS considers it unlikely that the Romanian government will perform another U-turn on the matter; the more likely risk to energy companies is that low-level protests will continue, providing the government with leverage to extract higher royalties or taxes from resource developers.

Assuming the government allows unconventional resource development to proceed, what are the implications for Romania's energy landscape? Romania has the largest proven oil and gas reserves in Eastern Europe-- domestic production continues to meet around 65% of Romania's needs. But the country's oil and gas output has been in long-term decline beginning in 1990, implying growing import dependence (mainly from Russia). 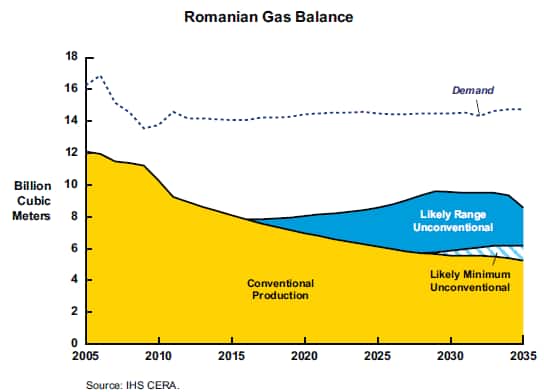 IHS CERA conducted a brief survey of Romania's geological assets in early 2012. The results suggested that Romania has modest recoverable shale gas reserves of around 443 trillion cubic feet of gas in place, mainly in the Moesian Platform in the Silurian Basin. In the base case scenario, production could reach around 0.3bcf per day by the early 2020s. A more recent IHS CERA study, "Going Global: Predicting the Next Tight Oil Revolution" has identified unconventional oil resources in the South Carpathian Jurassic Bals Shale Oil zone. Although unlikely to return Romania to the status of exporter, the gas resources could at least slow the rate of decline in production with important implications for domestic industry (notably chemical and fertilizer). This is illustrated in the chart above, which shows unconventional gas production potentially beginning around 2017. Tight oil production from the Jurassic Bals formation could be several more years in the future.

A key factor which could impact on future production in Romania is gas price deregulation. The price of domestically produced gas in Romania is set by the regulator, Autoritatea Nationala De Reglementare In Domeniul Energiei (ANRE). Last year's wellhead production price for gas was set at $162.29 per 1,000 cubic meters- well below the import price which is determined on the international market. Higher gas prices could stimulate investment into Romania's shale gas resources, and indeed this is set to take place. An agreement signed with the International Monetary Fund in 2011 envisaged Romania deregulating its gas market beginning in 2013. However, the political turbulence which gripped the country through 2012 delayed these measures. Gas prices are now scheduled to be liberalized by December 31, 2014 for industrial users and December 31, 2018 for household consumers.

If the Romanian government sticks to this time frame, it will not only attract investment into the shale gas sector but potentially also into the offshore section of the Black Sea, where recent discoveries by ExxonMobil and others are attracting strong interest. Between them, unconventional onshore resources and offshore reserves have the potential to dramatically improve Romania's supply outlook but this is contingent upon the government eliminating distorting subsidies and ensuring the upstream fiscal regime is stable.

Exceptional demand in the United States as well as multiple 1 GW plus markets in Brazil, Mexico, Chile, Spain and A… https://t.co/SwejiXbsVB

#Engineering tip: frac’ing a well increases the pressure and water saturation near the fracs. Learn how you can rec… https://t.co/08HKpFynVv

How do #oilandgas operators think about the #energytransition? Our tech and innovation research director, Judson Ja… https://t.co/yjVsz8pMvU

How competitive are recent #offshore #oil discoveries in Suriname and Guyana? Siddhartha Sen from our research team… https://t.co/YzcQ6JPWkk