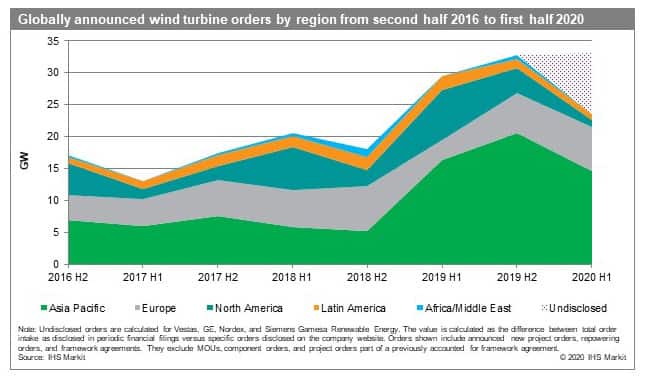 IHS Markit tracked 62.5 GW of new wind installations in 2019, 22% higher than the year before. While over 90% of this was in onshore, the offshore sector also remained strong with annual installations growing by 45%. However, the COVID-19 pandemic resulted in a slow start to 2020 with only 23.5 GW of publicly announced firm wind turbine orders recorded globally in the first half.

In 2020, global wind installations are expected to be driven by the United States and mainland China while significant growth in ordering activity has also been observed in other markets including the Nordics, Vietnam, Poland, and the United Kingdom in first half 2020.

While 2.X MW turbines were the most installed in 2019, announced orders have indicated a growing share of low and medium wind speed models with larger rotor diameters. IHS Markit has tracked orders for onshore turbines rated up to 6.6 MW with rotor sizes of 170 meters across various markets but predominantly in the Nordics, Brazil, Turkey, and Australia. 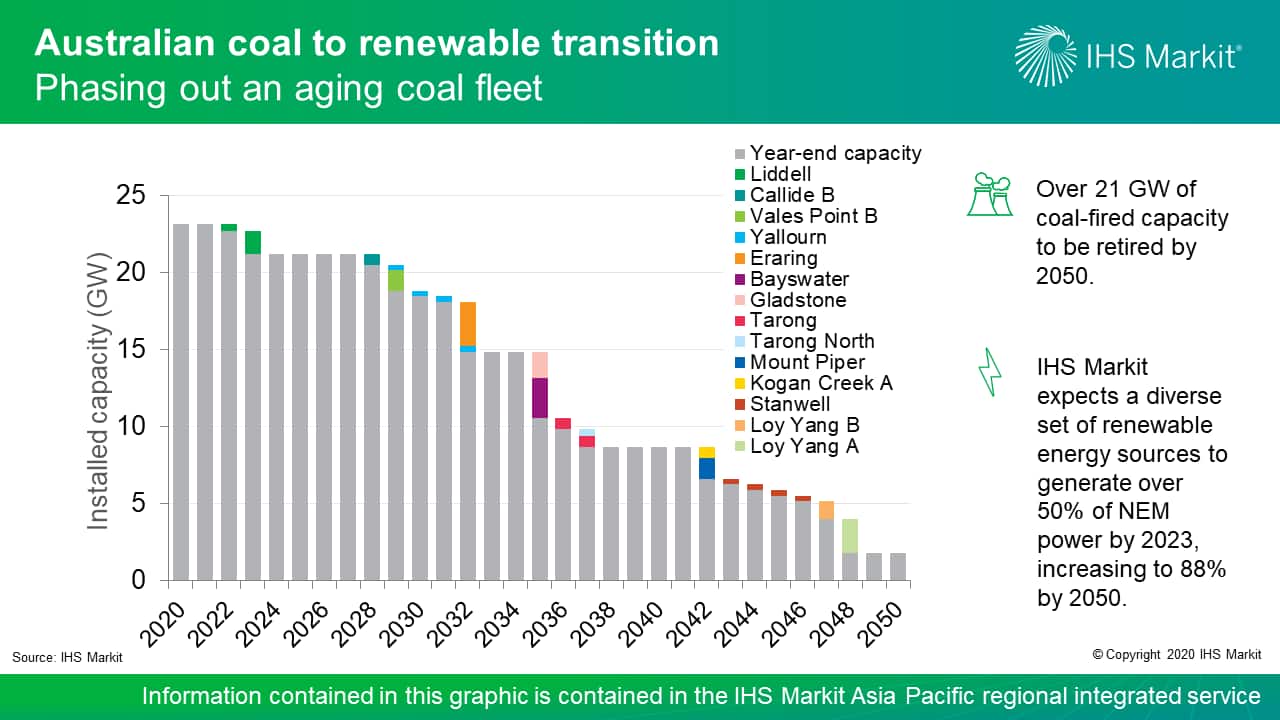 The Australian Energy Market Operator (AEMO) released the updated power system roadmap on 30 July 2020 to address future power generation and transmission issues that the National Electricity Market (NEM) is likely to face over the next 20 years. The 2020 Integrated System Plan (ISP) reaffirms Australia's intention to shift away from centralized coal-fired power generation toward a diverse portfolio dominated by distributed solar photovoltaic (PV) and utility-scale wind and solar, but lays out a more aggressive path to achieving this goal compared with the 2018 ISP.

Coal-fired power is projected to lose its dominant position with the phaseout of an aging fleet and the lack of new additions, owing to reduced economic competitiveness and environmental concerns. Despite various grid challenges, wind and solar are expected to register strong growth, together projected to account for over 64% of NEM's total installed capacity and generation in 2050. Pumped storage and batteries would be preferred over gas-fired power to firm the grid in the NEM. 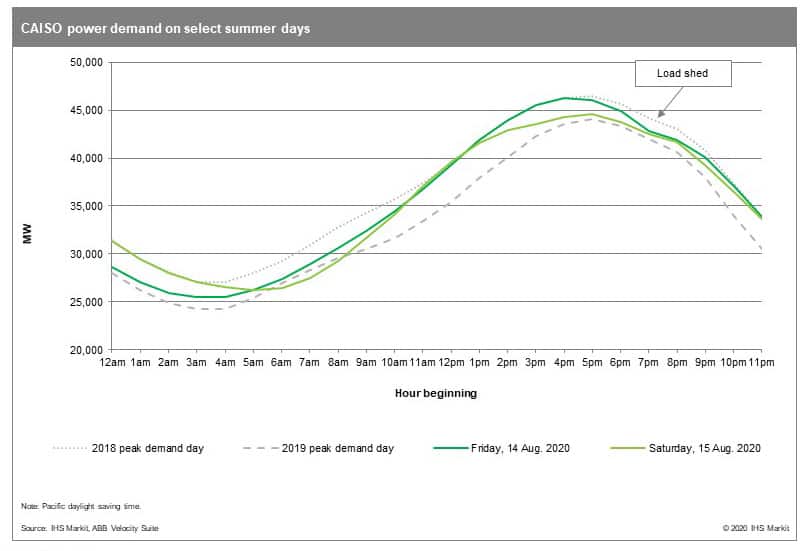 Friday, 14 August, the California Independent System Operator (CAISO) declared a Stage 3 Emergency for the first time since the 2001 energy crisis, requiring electric utilities to shed 1,000 MW of load between approximately 6:40 pm and 8:40 pm. More than 400,000 customers lost electricity for about an hour at a time. Another Stage 3 Emergency was declared on Saturday, 15 August, requiring nearly 500 MW of intentional blackouts, but it lasted for only 20 minutes—between roughly 6:30 pm and 6:50 pm. CAISO warns that that similar load-shedding events could occur again.

Hot weather pushed power demand to its highest point in 2020, but not atypically so. Low wind generation on 14 August yielded the highest level of net load so far in 2020. Generator outages totaling 5 GW contributed to the supply shortfall on 14 August 2020. Batteries adjusted their performance during the system emergency on 14 August in accordance with their role as capacity resources. As a consequence of these events, a stronger resource adequacy mechanism may emerge in the future.

Still want more on this topic? Listen to our recent podcast episode of "Energy Cents," "Lessons from California Power Markets."

Lowering the cost of charging at home with submetering: One piece to the electric vehicle adoption puzzle 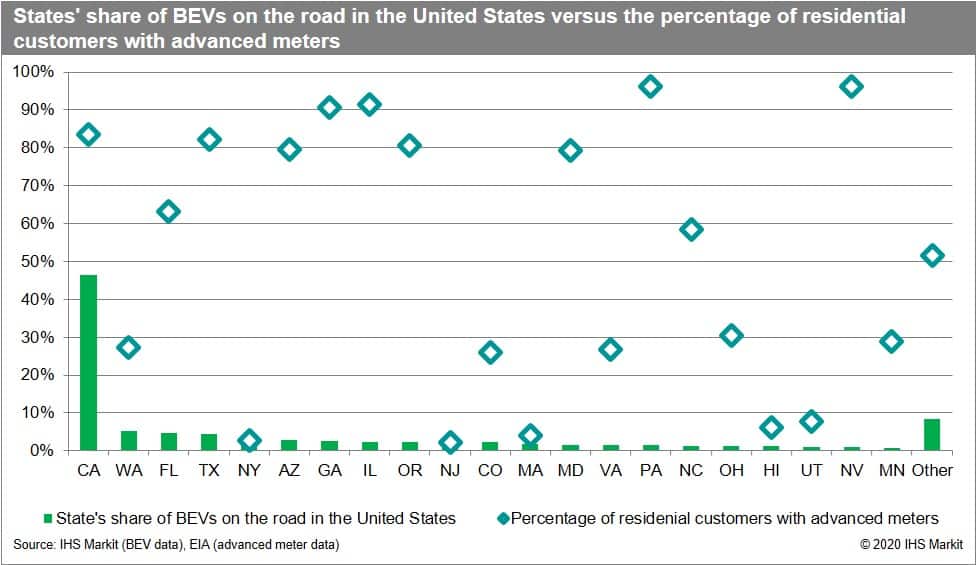 Mass electric vehicle (EV) adoption faces a variety of challenges—consumer preferences, range anxiety, and cost of ownership, to name a few. While automakers are addressing these headwinds, electric power utilities can too by affecting the cost of charging. To date, most utility initiatives have focused on make-ready public charging investments even though more than 80% of charging occurs at home. Xcel Energy's (Xcel) recently approved EV Home Service program is an innovative exception. By enrolling, EV owners can lower the cost of charging at home through time-of-use (TOU) electricity prices and home-charging equipment leases. Xcel will also use the home-charging equipment as the electricity meter (i.e., a submetering scheme). The cost of owning an EV will be lower under the EV Home Service program, making EVs more competitive with internal combustion engines (ICEs). Thus, EV adoption could accelerate relative to the status quo.

Finding more ways to reduce the cost of owning an EV, like centering submetering schemes around EVs instead of home EVSE, could accelerate adoption relative to the status quo.

An organized exclusive renewable energy market will facilitate additional RE procurement options and is expected to stimulate new investments in the short-term.

However, despite positive intent around the new framework, there are a few questions that raise concern over GTAM implementation. What is the future of the Renewable Energy Certificate (REC) market? How will this new platform coexist with the existing Term-Ahead Market (TAM)? And finally, an additional market price contradicts recent efforts to create a uniform market-clearing price in the short-term market.

Other hot topics from IHS Markit's September research include:

To learn more about the research and analysis from our power and renewables team, please visit our Global Power and Renewables service website.