As 2021 has progressed, manufacturers have been blighted by severe raw material shortages which have exacerbated pressures on capacity. Such shortages have been commonplace throughout 2021 due to the impact of the pandemic and one-off events which have reverberated through the supply chain. The automotive industry is one sector that has been especially impacted by a scarcity of key components, most notably semiconductors. Increasing numbers of auto makers have reported lost production in September, and the impact of shortages is likely to persist as the second half of the year progresses.

Challenges to production capacity through the third quarter were reflected in recently released September sector PMI data. At the global level, automotive sector output fell for a second month running, and at a sharper pace. European autos manufacturers, meanwhile, registered the first decline in production since the early stages of the pandemic outbreak in May 2020. At the same time, underlying data indicated soaring cost burdens, substantial supplier delays and expanding order book backlogs. 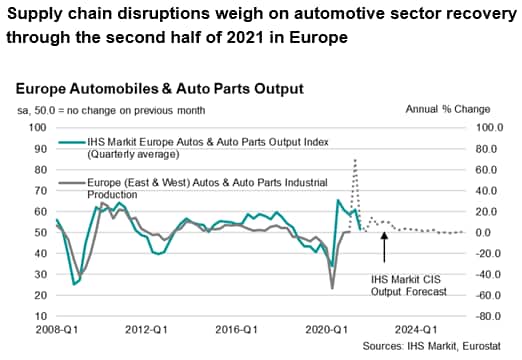 Capacity constraints at suppliers have been a common theme throughout the pandemic as vendors struggled to source materials and labour to process new orders. The emergence of the Delta variant across Asia and the renewal of lockdown measures in key markets for the supply of semiconductors and electrical items has translated to automotive manufacturers persistently operating below capacity.

Contractions in manufacturing production across Asia were reflected in PMI data, with economies in the region signalling severe declines in output and surges in backlogs of work. Many semiconductor producers have seen some of the most labour-intensive processes (conducted in economies such as Malaysia) hampered by staff shortages, owing to COVID-19 restrictions, thereby further extending the turnaround time for finished products. However, according to September PMI data, the steep downturn seen in Malaysia earlier in the year continued to ease as COVID-19 prevention measures were loosened. Nonetheless, our automotives team currently expect long lead times for semiconductors - which currently stand at 26 weeks or more - to persist for many months to come (pre-pandemic delivery times to OEMs averaging at between 12-15 weeks).

Although shortages have been an obstacle to automotive production since late-2020, events have accumulated over recent months to culminate in a critical moment of lost output across the sector in the third quarter. Such challenges are not expected to ease by the end of the year, but more likely during the second half of 2022. Our automotive experts currently expect that backlogs and lost operational capacity at automotives producers will only start to recover during the opening half of 2023. 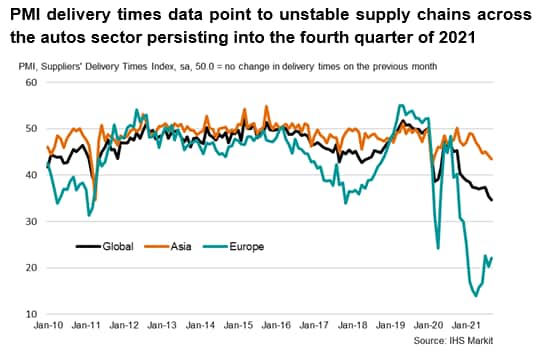 As the third quarter has progressed, difficulties across the sector to produce finished goods have worsened. At the global level, output contracted for the first time since the initial stages of the pandemic in June 2020 in August, according to PMI data. That said, at the finer regional level, Asian autos manufacturers registered a decline in production much earlier than their European counterparts. September data signalled a notable setback in capacity at European automotive manufacturers, as output fell for the first time in 16 months.

Although the impact of recent supplier shortages on production initially emerged in Asia, European manufacturers have registered far less stability in supply chains with severe and regular delays to input delivery times since the start of 2020. The disruptions in supply chains have also been reflected in soaring cost burdens across the sector, with European automobile & auto parts manufacturers subsequently seeing a far quicker hike in cost burdens than their Asian counterparts.

When survey respondents were broken down by manufacturers supplying the automotive sector, many noted that semiconductor shortages were leading customers to reduce their capacities further to ensure production could continue and shutdowns were avoided. This has had a knock-on effect for suppliers who have seen new orders suffer in response to challenges at auto manufacturers to produce finished goods. At the same time, substantial increases in purchasing activity across the automotive sector seen over recent months to shore up inventories were of concern for suppliers to the industry, as mass stockpiling activity may lead to demand recoiling sharply once inventories have been rebuilt sufficiently. 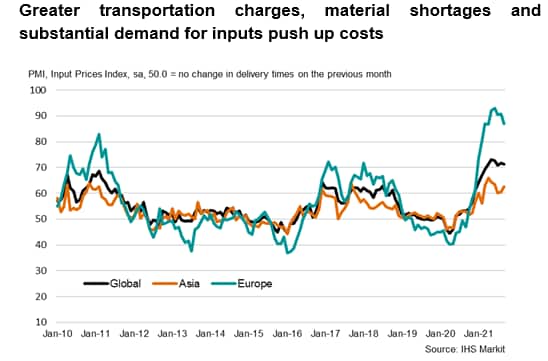 UK #CPI rose at the sharpest pace since records began in 1989, confirming trends seen in the UK #PMI which earlier… https://t.co/lqD8stpHFE

RT @WilliamsonChris: UK #Inflation (CPI) rose from 7% to 9% in April, its highest for 40 years. The stronger than expected rise was in fact…