An update on Q3 overall is available here. We will host two webinars on October 13th, one for the Asia time zone and another for EMEA/Americas. Revenue snapshots for July and August are also available.

Global securities lending returns declined by 28% YoY in September, however as noted in the August snapshot the YoY comparison is substantially affected by North American equity specials for the latter portion of Q3 2019. In the context of 2020, September was remarkable in its similarity to August, with global returns increasing by 0.2% MoM. US equities were the largest contributor to the YoY shortfall, as revenue from specials continued to decline from the YTD peak in June and was well below 2019 returns. September was the fifth month of 2020 to deliver less revenue than the 2019 comparable, the others were the months from March to May, along with August. The total Q3 revenue was $2.2bn, a 16% YoY decline. In this note, we review some of the drivers of global lending income in September.

September European equity revenue increased 2% YoY, notably completing Q3 with each month posting a YoY increase. That result was largely concentrated in Germany, with the rest of Europe combining for a 16% YoY decline in September (like the 15% decline in August). German equity lending revenue has been bolstered by hard to borrow shares YTD. Varta Ag delivered $14m in September revenue, the firm's 2nd consecutive month atop the global most revenue generator table. Borrow demand, and fees, for the German battery maker have trended higher since a January 8th report from an activist short seller suggested increased Chinese competition in a category where the firm had been viewed as an exclusive provider. Dutch firm Unibail Rodamco Westfield Se was the 2nd most revenue generating European equity, with demand for the firm's shares likely driven by anticipation of a rights issue, which was indeed announced on September 17th. The anticipation of Unibail's capital raise was partly informed by a similar course on the part of UK-listed rival Hammerson Plc, which used a rights issue as part of restructuring in August. When the Hammerson rights became tradable in mid-September, the borrow cost for common shares soared, briefly making Hammerson the most expensive to borrow UK equity and ultimately making HMSO shares the 2nd most revenue generating in UK in September. 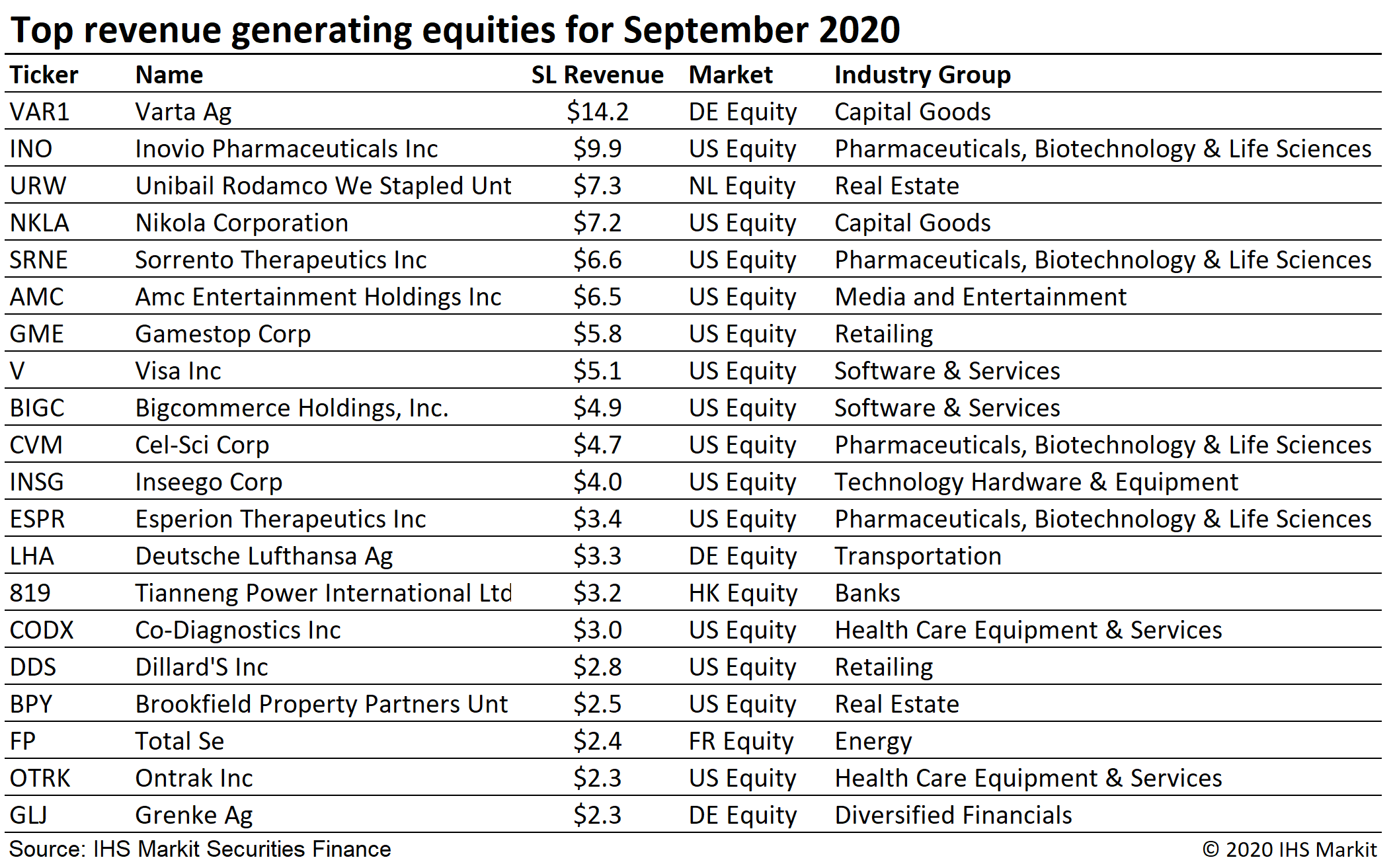 Americas equity revenues came in at $224m for September, a 43% YoY decline; compared with August revenues increased by 2%. US equity revenues came in at $199m, a 38% YoY decline and 2.6% MoM increase. The YoY shortfall was largely driven by the stellar returns from hard-to-borrow shares in September 2019. The surge in returns one year ago was led by Beyond Meat (BYND), which generated $65m in September 2019 revenues, however US equity revenues would have still declined by 8% YoY excluding the impact of BYND shares. August offered limited special situation lending opportunities and September began the same way, however IPO issuance, demand related to convertible bonds and a handful of other specials pushed revenues steadily higher over the course of the month. With further conventional and SPAC IPOs on deck for Q4, the uptrend from the Q3 low point in August may have further room to run. A few examples of 2020 vintage IPOs generating outstanding returns include BigCommerce Holdings, Inc. and Lemonade Inc, which generated $4.9m and $0.7m September revenue, respectively. Fees for new borrows in AMC Entertainment Holdings Inc. spiked on September 14th after a reset provision was triggered for an outstanding convertible bond which increased the number of shares each bond was convertible into, increasing the borrow demand for hedges. The top three US equity revenue generators Inovio Pharmaceutical Inc (INO), Nikola Corp (NKLA) & Sorrento Therapeutics Inc (SRNE) appear to be driven by directional short demand, with the share prices of each ending September at least 100% higher than the start of the year, while also being at least 40% below their YTD peak. 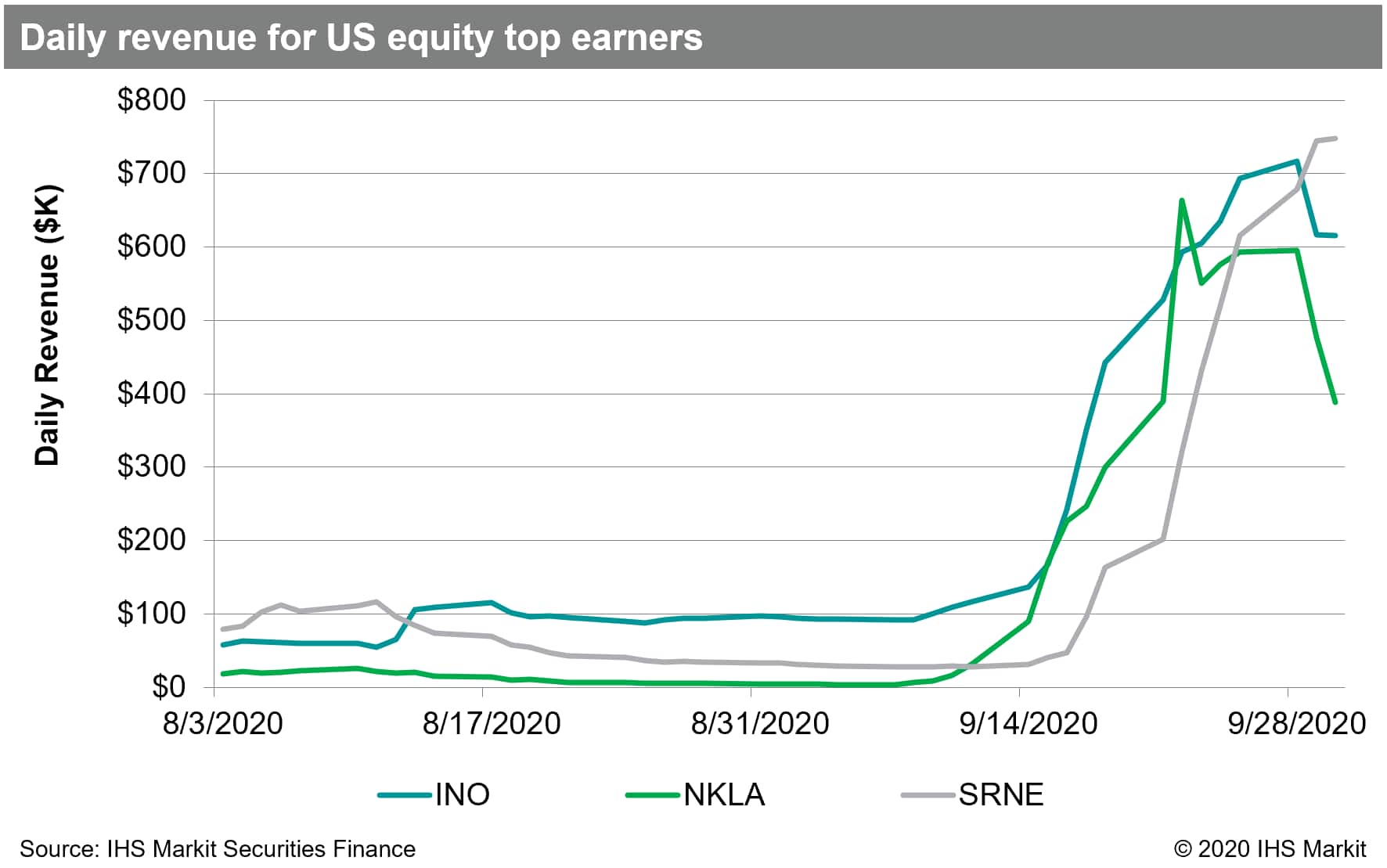 Canadian equity lending returns declined sequentially and YoY in September, delivering $24.6m in revenue, a 63% YoY decline, and a 3% MoM decline. Cannabis related returns have declined steadily as increased issuance has translated to additional lendable shares and lower fees. In September 2019 Aurora Cannabis Inc & Canopy Growth Inc combined for $32m in revenue, a figure which declined 91% to $2.9m in September 2020.

Asia equity lending revenues continue to fall short of 2019, with September revenues of $127m reflecting a 26% YoY decline, however compared with August revenues increased 8%. The largest market, Japan equities, delivered $67m in September revenues, a decline of 23% YoY; The shortfall was mostly the result of lower fees, however average on-loan balances posted the first monthly YoY decline since January. Hong Kong equity lending revenues slipped again in September, with $22.6m in revenues the lowest monthly figure YTD, though still a 2.8% YoY improvement. The most revenue generating HK equity, Tianneng Power International Ltd, has had increasing borrow demand since an activist short seller report was released about the firm in May. Following the release of the report revenue trended higher together for each month, peaking at $3.5m in August, however balances declined with the share price in September and revenues declines to $3.2m. The short sale ban in South Korea continues to limit lending revenue, with $11m in September revenue being the lowest for any month of 2020. SK equity revenues for Q3 totalled $39.6m, the least for any quarter since Q4 2014.

Global ETF revenues were $30.7m for September, an 22% YoY increase, and 3% more than August. On-loan balances averaged $59bn, a 4% MoM increase, but still well below the Q2 average of $65bn. Global ETF utilization increased in September on a marginal decline in lendable value set against the increase in balances. Two of the top three most revenue generating funds focus on China exposure: US listed Harvest CSI 300 China A-Shares ETF on top with HK listed ChinaAMC CSI 300 Index ETF ranking third; they were also in the top three for August, however the two funds switched places in the rankings with the Russell 2000 ETF (IWM) remaining between them. While the revenue generated in September was low, it's worth noting the increased borrow demand for high-yield credit funds HYG and JNK as well as loans fund BKLN, which corresponded with increased HY credit stress over the last two weeks of September. That may augur well for lending returns for HY products in Q4.

Corporate bond lending revenues continue to lag well behind 2019. Corporate lending returns came in at $32m for August, a 33% decline YoY. Corporate bond lending revenues have been on a steady decline since the post-GFC peak in 2018. Central bank support for global credit has dampened borrow demand while lendable value has increased steadily since April, causing utilization and spreads to both reach YTD lows in September. Despite the widening of the HY CDX index over the last two weeks of September, borrowing of USD HY credit continues to decline.

Government bond lending activity has substantially returned to pre-COVID levels in terms of spread and reinvestment revenue. Global government debt lending revenues totalled $110m in August, a 3% increase YoY and a 6% decline MoM. The decline relative to August was due to decreases in balances and fees for US and European sovereign issuers. Average spreads for government debt have steadily declined since April, posting YoY and MoM declines for each month starting with May. Fee-based revenue for US government bond lending came in at $62m for July, a 3.5% YoY increase and a 6.5% MoM decline. From the peak revenue in April, the downtrend in spread returns for UST lenders has been steady, with September delivering the lowest monthly return since March. Returns from lending European sovereigns were $37.7m for September, a 7% YoY increase and 4.7% MoM decline.

The latter two months of Q3 failed to build on the momentum of a stellar July, with revenues declining 28% MoM in August and then increasing 0.2% from August's low base in September. Global Utilization of assets in securities lending programs posted the first MoM increase since March, which is an upbeat marker after five months of steady declines, even if only a small uptick. Despite the recent challenges, there is cause for optimism in terms of new issuance and other corporate action related trades which are likely to remain a revenue driver in Q4, along with the potential for volatility around the US elections in early November. YTD global returns are down 8.7% through September.