Global securities finance revenues totaled $892m in November, a 20% YoY increase. ETPs saw YoY increases in revenues and loan balances. All asset classes showed YoY increases, except for European equities where a lack of new specials dented revenue opportunities. In this note we'll discuss some of the highlights of the November equity finance revenue.

APAC Equity Finance revenues totaled $189m for November, a 78% YoY increase, but down from last month. The main story in the region is the continued growth in Taiwan revenue opportunities. Despite some falling specials balances and declining revenue since September in Asia, Taiwan continued to provide a bright spot with $55m in November. For the first time it was the top ranked country in the APAC region based on equity finance revenue.

Hong Kong SAR and South Korea jumped above Japan by generating $44m and $38m respectively. South Korea was up 334% YoY, mainly due to the effect of short selling bans that were in place last year. Taiwan specials include Au Optronics (2409 TT) from last month, but the top earning name for November was Lg Display (034220 KP) in South Korea delivering $4.36m for the month.

Americas Equity Finance revenues totaled $315m for November, a 5% YoY increase. Average fees were down 25% YoY, utilization was down 5% YoY, but the average balances increased by 41% YoY. Trends on a MoM perspective showed a downtick of 10% in revenues with an average decrease of 7% in average fees and steady average balances compared to October.

US Equity revenues totaled $290m for November, a 6% YoY increase, but an 11% MoM decrease in average daily revenues. Four of the top five names from last month (HOOD, VMW, DNA, FFIE) all saw a decrease in average fees and average balances from October which contributed to the drop in MoM revenue. Former SPAC name Bakkt Holdings (BKKT) takes over the top spot in the revenue charts as borrow costs spiked shortly after the merger was finalized with VPC Impact Acquisitions in late October. Another climber in the revenue charts is Bitcoin mining operation Bit Digital (BTBT) which saw increases in average borrow costs of 173% and increase in demand of 57%. Recent SPAC merger name AGC (now known as GRAB) saw revenue more than double MoM thanks to a 174% increase in borrow costs. One name sitting outside the top 10 is Beyond Meat (BYND) has seen increases in average fees of +325% MoM since lower earnings were reported in November.

EMEA Equity Finance continued its decline in November with revenues of $106m, down 17% YoY. Italy remained robust with one of the top earning names, BMPS, contributing $2.7m to the total of $9m for the country in November. German equity finance revenue was $12m, down 59% YoY, and UK revenue was $11m, down 47% YoY. Dividend payouts in Sweden & Norway helped boost lending revenues from the securities finance channel.

Revenues from lending American Depository Receipts (ADRs) increased 9% YoY, totaling $25m in November, extending the broad YoY revenue uptrend for the third consecutive month. ADR revenues saw an uptick of 5% MoM from October. Didi Global (DIDI) led ADR finance revenues for the first time since its IPO this summer with $5.6m, or 23% of November ADR revenue. The primary drivers for November's surge were a 6% YoY increase in balances while fees and utilization experienced a similar rise with 5% and 17% YoY growth respectively.

Global ETP revenues totaled $52m for November, a 45% YoY increase. Loan balances were $97bn, a 44% YoY increase but slightly down from October. Fees remained flat compared to November 2020 levels, while utilization had an 8% increase YoY. The increase of balance suggests that the use of ETPs for products hedging is increasing compared to last year.

The top revenue generating ETPs in November have seen a decrease compared to last month. The iShares iBoxx $ High Yield Corporate Bond Fund (HYG) remains the top revenue generator, returning $6.99m, down from $8.02m in October, while the Ark Innovation Fund ETF (ARKK) is also down 10.8% MoM. However, the Ishares Iboxx $ Investment Grade Corporate Bond Etf (LQD) jumped from $1.2m generated in October 2021, to $3.51m in November, representing a 181% increase, primarily driven by a rise in loan balance.

Corporate bond fee-spread revenues totaled $56m in November, the highest YTD and a 75% increase YoY. Demand continued to increase, with balances rising 49% YoY to reach $271bn which is the highest average YTD. 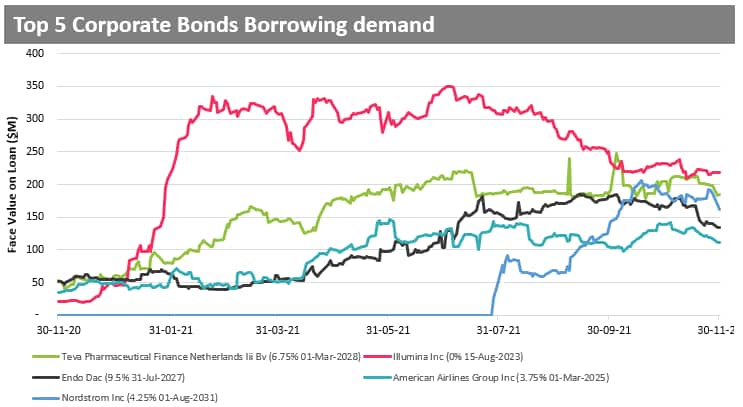 Fee-spread revenues of global sovereign debt totaled $133.9m for November, a 22% YoY increase but a 2% MoM decrease. Average balances remain steady at $1.24T in value which is a 27% YoY increase for positive-fee trades.

Global securities finance revenues increased by 20% YoY in November, a step down from October which delivered the third largest percentage gain YTD. The use of exchange traded products for short hedges has helped maintain its revenue gain. Borrow demand for corporate bonds continued to increase with eight consecutive months of YoY increases in intrinsic income, with November having the most monthly revenue YTD. The decline in EMEA equity revenues was driven by a sharp drop in fees as well as in borrow demand. Additionally, the recent de-listing of Chinese ADRs in the USA may lead to broader ramifications for US-listed Chinese stocks heading into the end of the year.