Global securities finance revenues totaled $853m in March, an 11% YoY increase. The YoY increase was primarily the result of ADRs, ETFs and non-US equities. Average daily global revenues decreased 5% MoM compared with February. The primary contributor to the daily revenue shortfall in March was a continued decline in US equity special balances. In this note, we will review revenue drivers from March, which wrapped up the first quarter with $2.6bn in revenue, a 15% YoY increase.

Americas equity revenues came in at $230m for March, a 10% YoY decline and a 28% decrease in average daily revenue compared with February. The MoM decline was largely the result of declining special balances, reflected in weighted average fees decreasing 31% MoM, while loan balances increased by 4% MoM. Average fees went from being up 32% YoY in January to -31% YoY in March.

US equity revenues came in at $198m for March, a 6% YoY decline. US equity special balances declined by 45% MoM, with an average of $7bn in March, following February's $13bn average, a far cry from January's $25bn average. Special balances are defined in this note as balances with a fee greater than 500bps. 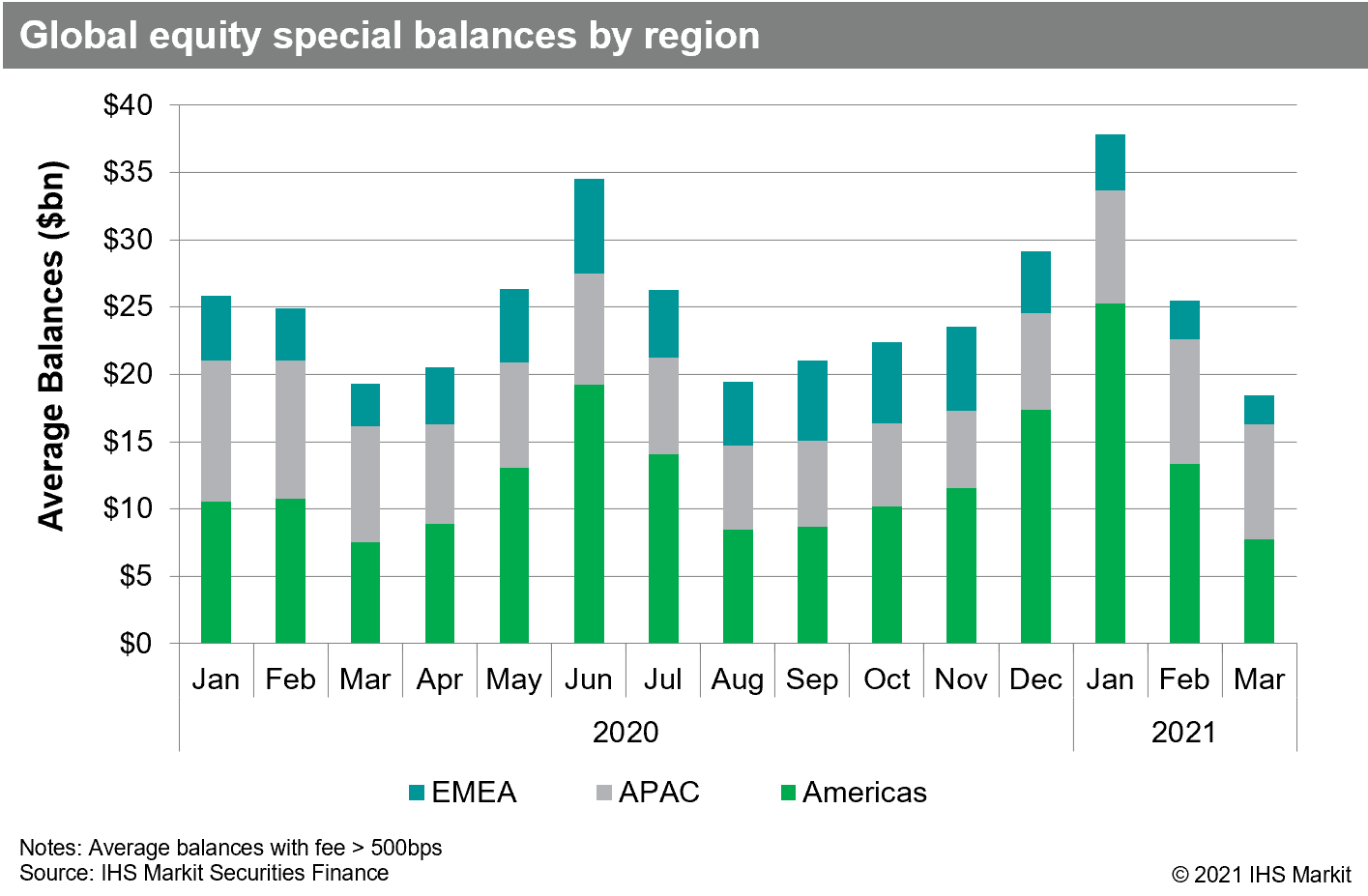 The highest revenue generating US equity was Rocket Companies, whose share price increased dramatically over the last couple days of February and early March, subsequently declining to give back much of the gains. As we have seen with other recent short squeezes, fees for new borrows soared with the increased trading volumes and on-loan values increased initially based on the share price move. Like the share price, borrow demand and average fees declined sharply over the subsequent week, resulting in 98% of March revenue being generated during the first two weeks of the month.

Revenues from lending American Depository Receipts (ADRs) increased 512% YoY. Most of the increase was driven by Hong Kong SAR domiciled Futu Holdings, which generated $81m in March, 71% of the total ADR return, down from 75% in February. Excluding the impact of Futu, March ADR revenues increased 65% YoY. 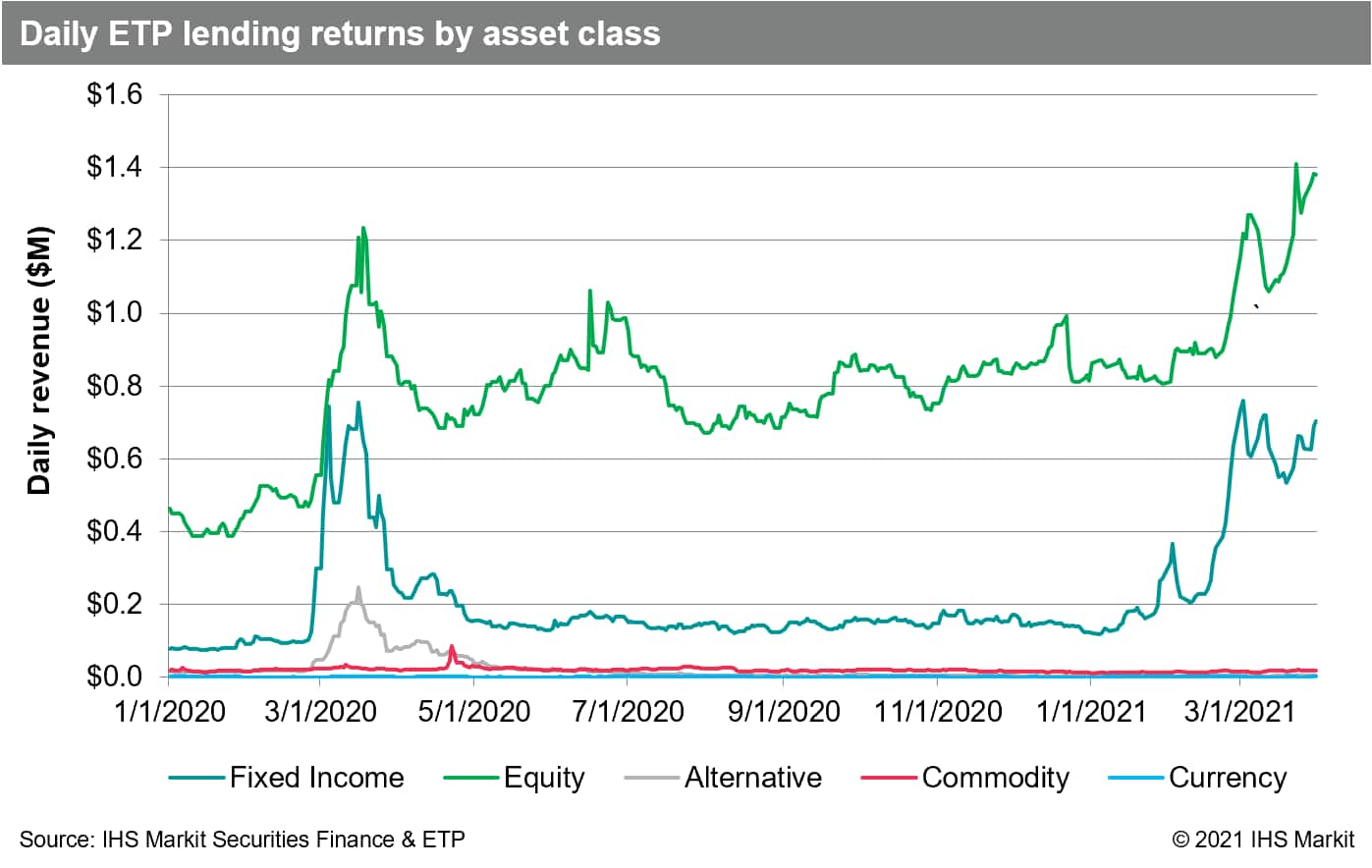 Government bond borrow demand remains robust, with $1.2T in positive-fee global balances for March reflecting an 18% YoY increase. Revenues totaled $135m for March, a 7% YoY decline compared with March 2020, the peak in sovereign debt fee spread revenues last year. US government bond lending revenue came in at $83m for March, an 10% YoY decrease. The most revenue generating bond was the UST 10Y due Feb 2031, whose stellar $6.5m return in March, resulting from elevated fees during the first two weeks of the month. Returns from lending European sovereigns were $40m for March, a 0.6% YoY decline.

Revenues for Q1 came in at $2.6bn, a 15% YoY increase. The January blowout in crowded US equity short positions led to a decline in special loan balances during the rest of Q1. While the boom in SPAC issuance has slowed, the impacts for equity finance may still be in an early phase, given how many business combinations are possible over the remainder of 2021. Even if only a small number of the several hundred outstanding SPACs find deals in 2021, the revenue potential when an arbitrage opportunity opens between the warrants and common shares can be massive. Even asset classes which failed to generate YoY revenue growth have cause for optimism, including the resumption of dividends and conclusion of short sale bans for equities. For fixed income, US Treasury demand has been strong, and varying expectations for growth and Fed policy may continue to generate lending opportunities. One year on from the bottom of the COVID-crash, YoY comparisons are favorable regarding loan balances, and a number of catalysts are set to support revenue growth. Directional short selling in hard-to-borrow names may be supported by relative underperformance in February and March, however the long shadow of January remains.