Please join us next Wednesday, July 14th for the Q2 2021 IHS Markit Securities Finance webinar via our Americas/EMEA and APAC sessions!

Global securities finance revenues totaled just over $1B in June, narrowly exceeding the stellar June 2020 return. The uptrend in equity specials balances accelerated in June, particularly relating to current and former US SPACs and South Korea. ADRs and ETPs are notable for seeing YoY increases in revenues, loan balances, fee and utilization in June. In this note we'll discuss the drivers of June revenue, which increased 4% YoY.

APAC equity finance revenues increased by 37% YoY in June, with $176m in revenue, the most for any month since March 2019. Asia equity special balances continue to increase with June's $14bn in daily average special balances reflecting a 28% MoM increase and the highest monthly average since January 2019. Special balances are defined in this note as balances with a fee greater than 500bps.

A key to the upswing is revealed by the two most revenue generating equities which are both listed in South Korea. SK equity revenue totaled $36m for June, a 103% YoY increase and the most monthly revenue since February 2020, the last full month prior to the short sale ban. SK equities contributed 38% of the YoY APAC equity revenue increase.

Hong Kong SAR equity finance revenues increased by 36% YoY in June, overtaking Japan as the most revenue generating equity market in the region. The most revenue generating HK equity was Pop Mart International Group Ltd., which generated $3.5m in June revenue. HK equity finance activity has steadily increased since the 2020 revenue low point in September, with June seeing the most revenue, highest average fees and loan balances during that span. Another key to the APAC resurgence has been Taiwan, where loan balances and revenues both reached all-time highs in June.

Malaysian firm Top Glove Corporation was taken down as the most revenue generating APAC equity in June, but remains near the top of the list and continues to boost MY equity revenues.

Americas equity revenues came in at $443m for June, a 6% YoY decline. The YoY revenue decline is the result of declining average fees, with loan balances increasing. The decline in average fees is as much the result of stellar special balances in June 2020, which resulted from the Carnival special balances relating to convertible bond issuance and a broad short squeeze in crowded short positions; For June 2021, Americas equity average fee of 82bps is the highest monthly average since January, reflecting an uptrend from the low point in March.

US equity revenues came in at $411m in June revenue, a 2.5% YoY decline and a 19% MoM increase compared with May. US equity special balances increased by 7% MoM with an average of $17bn in June, the largest average specials balance since January. 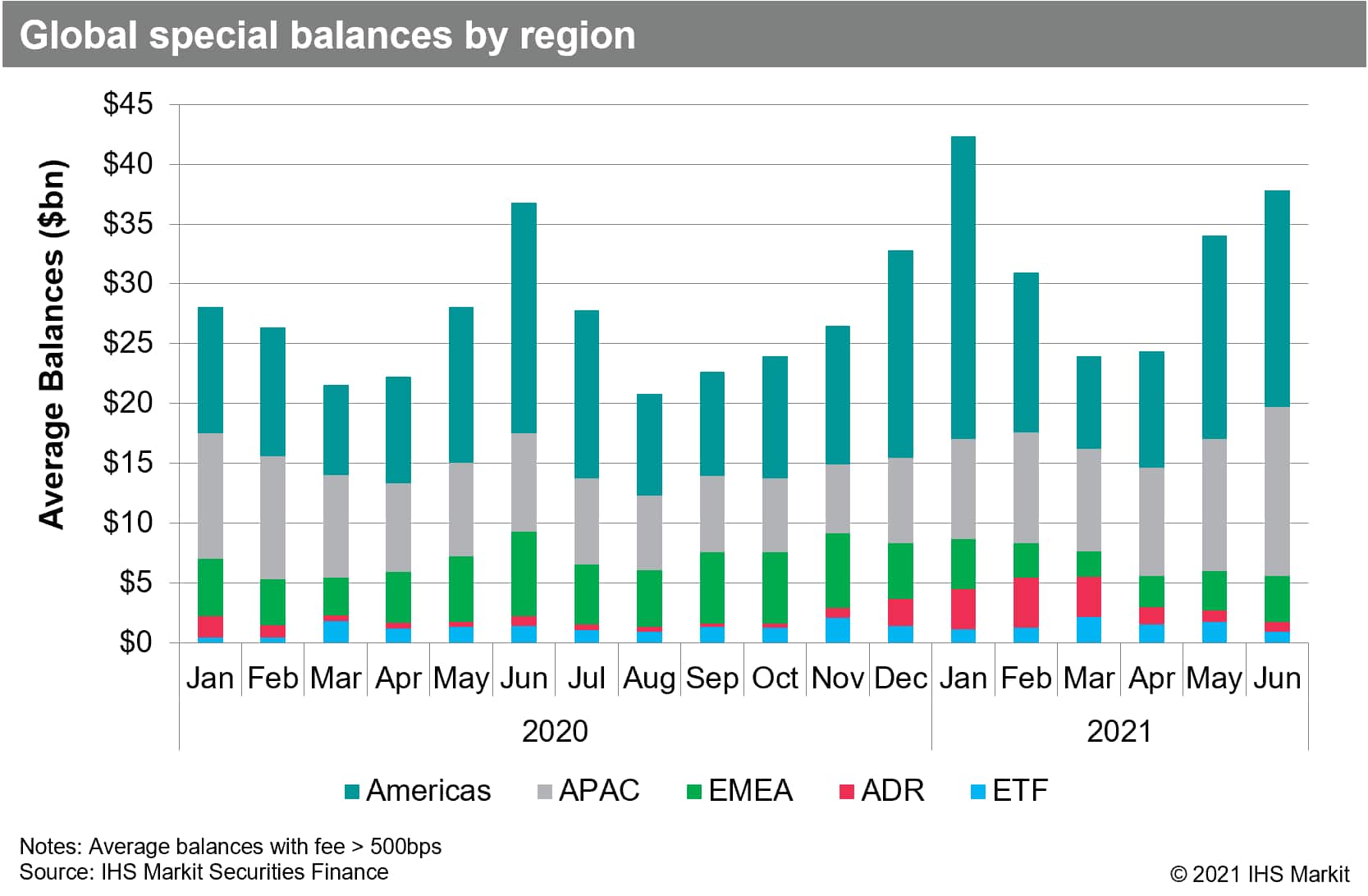 European equity returns declined by 19% YoY for June, with $133m in monthly revenue. The YoY decrease was driven by decreasing fees, the result of a dearth of specials revenue, particularly in Germany.

German equity revenues of $21m reflect a 60% YoY decline for June. Varta led German equities in June with just over $4m in monthly revenue, with other stalwart revenue contributors Grenke and Deutsche Lufthansa continuing to deliver. The YoY shortfall was partly driven by Wirecard delivering $15m in June of 2020, more than the top 5 German equities combined in June 2021.

France listed equity revenue increased 5% YoY. The upswing in revenues was partly the result of reinstated dividends which had been cancelled or reduced in 2020. UK equity revenues increased 16% YoY led by Tui Ag; borrow demand for the travel and tourism firm's shares is partly impacted by the convertible bond.

Revenues from lending American Depository Receipts (ADRs) increased 45% YoY, with average daily revenues increasing 6% MoM. The general uptrend in ADR borrow demand remains in-tact, though revenues and specials balances are lower than at the start of 2021 when Futu Holdings shares led ADR demand. June average loan balances of $54b was the highest monthly average since July 2018 which consisted of 55% Alibaba Group (BABA) balances. The largest contributor to June 2021 balances was Astrazeneca (AZN) which contributed only 17% of average daily balances. 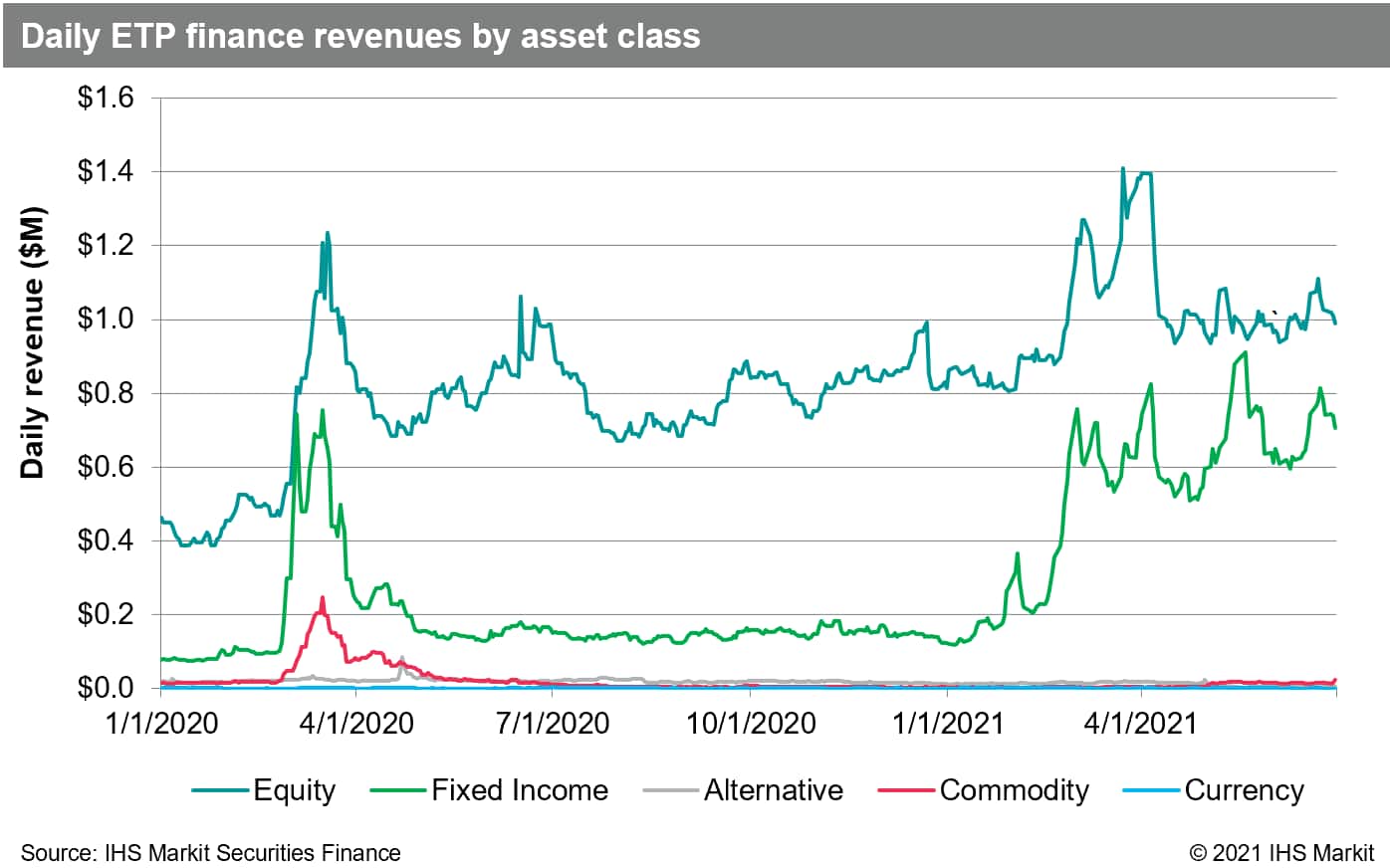 Corporate bond lending revenues increased 18% YoY, with $41.8m in June revenue. Corporate loan balances averaged $241b in June, an increase of 44% YoY and a slight decline relative to May. Lendable assets have also steadily increased, reaching an all-time high in June, $4.7T, sufficient to drive a small decline in utilization as compared with May. Total corporate bond lending revenues for agency programs, including reinvestment returns and negative fee trades declined by 15% YoY as the result of narrower reinvestment spreads.

Convertible bonds contributed 8.6% of June corporates revenue, up from 7.9% in May, led by the Viacom CBS Inc 5.57% convertible note due April 2024. June convertible bond lending revenues of $3.6m were the most for any month since July 2019.

Fee-spread revenues for global sovereign debt totaled $130m for June, a 5.5% YoY increase. Government bond borrow demand remains robust, with $1.25T in positive-fee global balances for June reflecting an 38% YoY increase. The $341bn increase in positive-fee balances is the result of a $259bn YoY increase in total on-loan balances along with $82bn moving from negative to positive fee. Total government bond lending revenues for agency programs, including reinvestment returns and negative fee trades declined by 9.6% YoY, as the result of narrower reinvestment spreads.

US government bond lending revenue came in at $71m for June, a 5% YoY decrease, the lowest monthly return since February. The Feb 2031 UST 10Y note took the top rank on revenue generator table from the Nov 2030 UST 10Y, the two have switched back and forth as the top earner for the last three months. Returns from lending European sovereigns were $44m for June, a 19% YoY increase, with the French 5Y due May 2025 appearing among the top 5 revenue generating sovereigns.

US equity specials mounted a timely comeback, after a thin stretch from late-February to April. Current and former SPACs are dominating the top of the US leader board, a phenomenon likely to continue as the record outstanding SPACs seek business combinations over the remainder of 2021. The usage of exchange traded products in institutional long portfolios and for short hedges has resulted in record highs for lendable assets and loan balances, respectively, with increased borrow demand likely continue to boost revenues going forward. One trend which may be reversing course is the increased borrow demand for US Treasury securities, with interest rates in decline June saw loan balances and revenues for UST notes at the lowest levels since February. As the drivers of lending returns which have been anticipated since the start of the year continue to play out, including SPACs, convertible hedging, dividend reinstatements and the conclusion of short sale bans, Q2 concluded with $2.8b in revenue, a 13% YoY increase.