Global securities lending revenues totaled $979m in January, a 24% YoY increase. That marks the fifth consecutive month of increasing global returns. The month ended with short-squeeze fireworks, which also had the impact of boosting on-loan balances in many hard to borrow shares, a substantial boost to US equity revenues. In this note we will review revenue drivers from January, a cracking start to the new year.

Americas equity revenues came in at $476m for January, a 50% YoY increase and a 10% increase compared with December. The upswing was largely the result of increased special balances, reflected in weighted average fees increasing 26% MoM, while loan balances increased by 10% MoM.

The most revenue generating US equity in January 2021 was GameStop (GME) with $41m, generated largely as the result of the share price increasing 1,600% over the course of the month. The GME borrow fee did increase amid the volatility, however it remained lower than peak fees observed around the proxy record date in 2020. 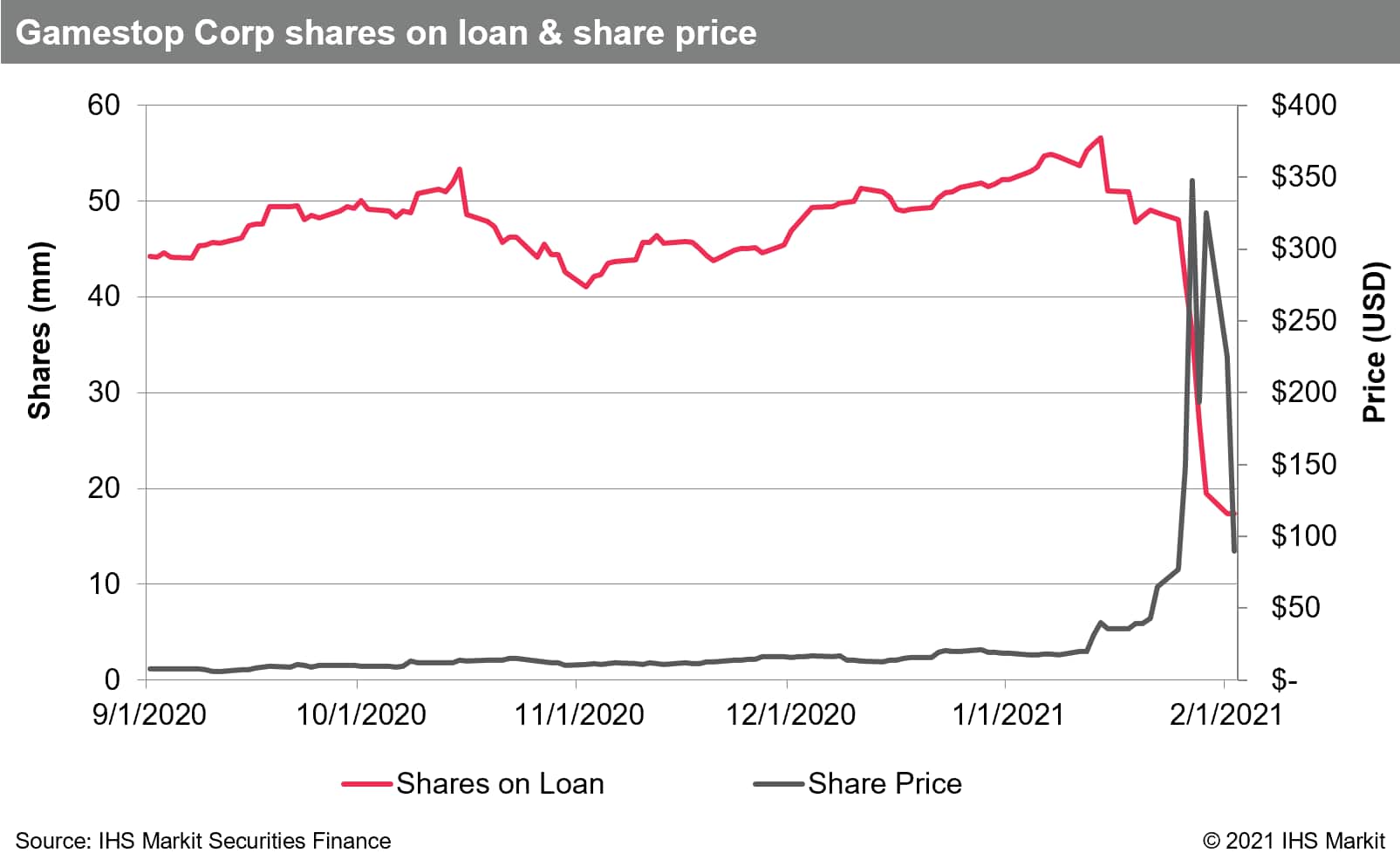 Utilizing the IHS Markit Situational Analytics dataset we aggregated current and former SPAC IPOs which went public since the start of 2020 to look at the impact on equity finance revenues. The 2020 vintage of SPAC IPOs generated $33.4m in January, led again by Quantumscape (QS), which generated $20m in January revenue. In December the 2020 SPACs delivered $69m in revenue, though 94% was contributed by QS delivering $64m. This partly reflects the 2020 SPACs that have not yet found business combinations, which may augur well for financing revenues when they do. Revenues for all former SPAC IPOs, since start of 2017, totaled $76m in January, down from $101m in December.

European equity returns increased 19% YoY for January, with $112m in monthly revenue. While the recent revenue upswing remained in-tact, a key contributor may have reached a crescendo. Varta Ag led EMEA revenues during the 2nd half of 2020, with monthly revenues increasing each of the last 12 months, before soaring to $22.1m in January. The increased revenue in January was the result of both increased fees and, during the last week of the month, a surge in the share price. The increased price may have been partly the result of short covering, with the shares on loan decreasing by nearly 1m shares over the last week of the month, equating to 14% of the volume. Continuing to be boosted by Varta, German equity lending revenues totaled $34m for January, an 79% YoY increase and the most monthly revenue since July 2020. French equity finance revenues were boosted by special balances, resulting in $18.3m in January revenue, the first YoY increase in monthly revenue since January 2020. UK equity revenues of $15.8m, a 48% YoY increase, were boosted by Tui AG, which generated nearly one third of the monthly return. EMEA specials balances declined by 10% MoM.

APAC equity finance revenues declined YoY in January, as they did for each month of 2020, however returns did increase 5% MoM. Asia equity special balances continue the fledgling recovery from the 2020 low point in early November, with January's $8bn in daily average special balances being the most for any month since March 2020.

The largest market, Japan equities, delivered $44m in January revenues, a decline of 16% YoY and an 8% decline compared to December. Hong Kong equity finance revenues continued to trend higher in January with $40m in revenue reflecting a 56% YoY increase and exceeding any month of 2020. Apart from Malaysian firm Top Glove Corporation, HK equities owned the top of the revenue generation leader board. The short sale ban in South Korea continues to limit lending revenue, with $8m in January revenue reflecting a 79% YoY decline. South Korea's Financial Services Commission (FSC) has extended its short selling ban until May 2nd, at which point short selling may resume on KOSPI 200 and KOSDAQ 150 stocks.

Government bond borrow demand continues to increase, with January average balances with positive spreads of $1.1T, a mark only briefly observed during the latter portion of March 2020. Revenues totaled $134m in January, a 13% YoY increase, and the largest monthly return since April. US government bond lending revenue came in at $79m for January, a 20% YoY increase. The most revenue generating bond was the 10Y due Nov 2030, which saw soaring demand and fees as yields rapidly increased over the first two weeks of the year. Returns from lending European sovereigns were $43m for January, a 6.7% YoY increase, substantially similar to the December return.

2020 was a challenging year for short selling, with April, June and November being particularly difficult to navigate, given that crowded shorts dramatically outperformed. After a difficult 2020, the challenges on the short side have persisted into 2021. The share prices of the most expensive to borrow US equities in the IHS Markit Research Signals product outperformed the least expensive to borrow by 29% in January, the most on record. Directional short selling is only one driver of borrow demand, but it's certainly a significant one. The unprecedented string of outperformance on the part of crowded shorts may lead to lower borrow demand for certain strategies.

Global securities finance ended 2020 on a high note, with stellar December returns, after a challenging run during the summer and early fall. The IPO & SPAC boom extended into January and is expanding to other regions from the US, some of which will likely result in borrow demand around lockup expiries, or warrant redemption for SPACs. The other side of a surging share price for an equity with short crowding is the capital gain and lending return for shareholders, reflected nowhere better than GameStop being the most equity finance revenue generator globally for the month. With a multitude of demand drivers in place, which also include dividend reinstatement and the potential remaining short sale bans to conclude, the outlook is bright for lending revenues.