Equity finance trading requires the provision of timely market data. Transactions reported to IHS Markit reflect new loans for a given settlement date. Transactions are published as received throughout the day, providing real-time insights. In this note we'll walk through an example of how this dataset is used to flag changes in borrow demand and fees.

On Monday Feb 15 Mitchells & Butlers Plc announced an intention from management to pursue an open offer to raise £350m. The offering created an arbitrage opportunity whereby an investor could purchase shares in order to participate in the offering and at the same time purchase put options to effectively lock in the current price for the shares, including an estimate of the shares they will be allocated at a discount in the offering. Hedging the put options drives borrow demand for the common shares. Lending shares to meet the increase in borrow demand is an attractive proposition for shareholders who do not participate in the offer. 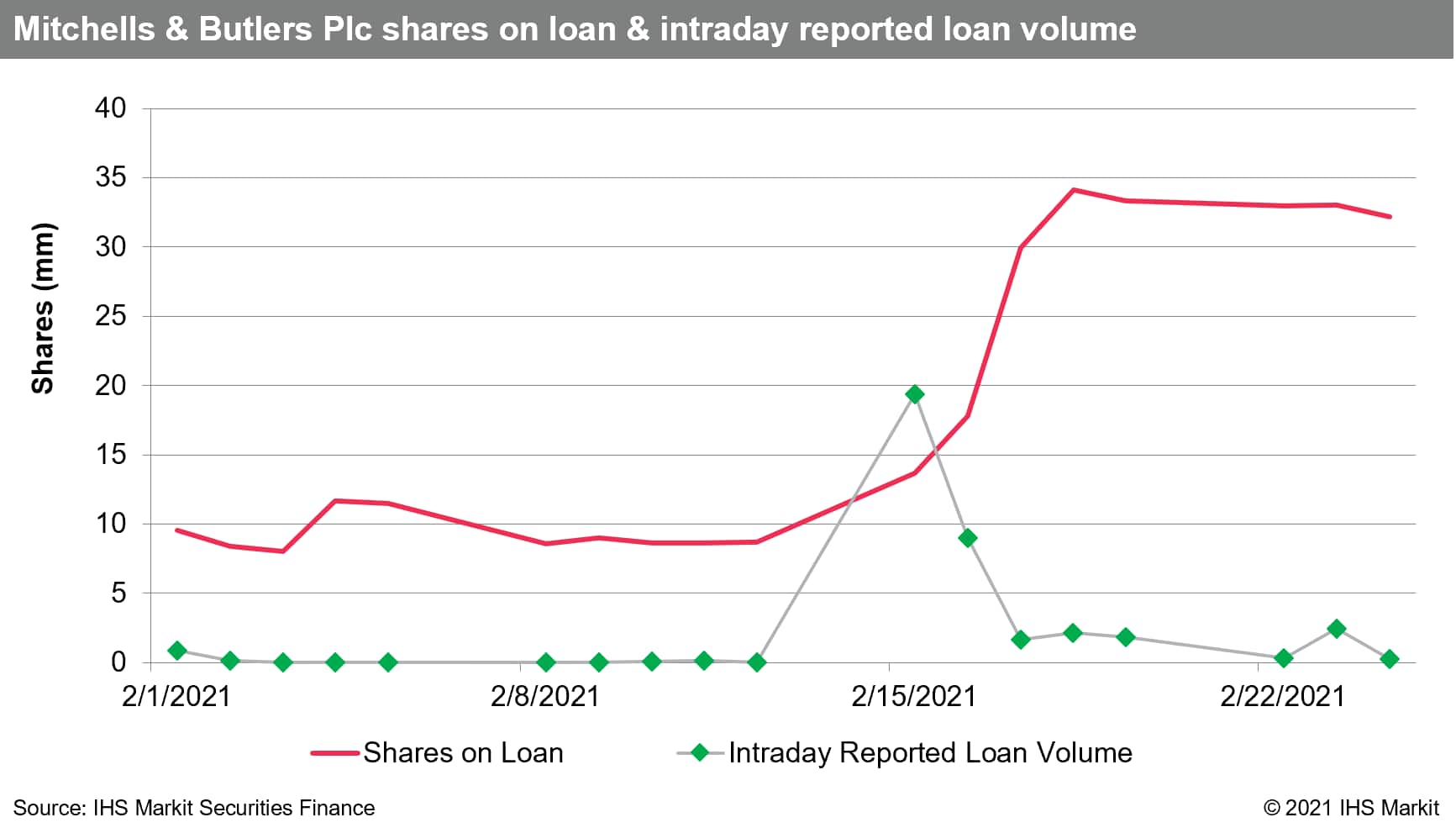 The IHS Markit Securities Finance dataset published for Feb 15 showed 8.66m shares on loan for MAB. That figure primarily reflected settlement (S) for trading on Feb 10, which settled on Feb 12, and was published on S+1, with the weekend between. New loans were reported throughout the day on Feb 15, totalling 16m shares for that day, with borrow fees for intraday loans still GC on a weighted basis.

During the trading session on Feb 16 traders had the benefit of the Feb 15 settlement data, which showed 13.6m shares on loan, a 57% DoD increase, with the weighted average fee for new loans of 25bps. Throughout the day on the Feb 16, new loans were reported with fees ranging from 20-50bps. The Feb 16 intraday loan volume totalled 8.9m shares.

On Feb 17 the number of shares in settled open loans totalled 17.8m shares, a 31% DoD increase. During the Feb 17 trading session, there were a few of small-size loans reported with 100bps fee, though there were still some GC and a range between.

The Feb 17 settlement dataset was published on Thursday Feb 18, showing 29.9m shares on loan, a 68% DoD increase. The weighted average fee for new loans on Feb 17 was just over 30bps, suggesting a move above GC was in progress. Utilization of MAB lendable shares increased from 17% on Feb 12 to 54% for the Feb 17 dataset, reflecting both the increase in borrow demand and a decrease in lendable shares.

The growth in total lendable assets has outpaced borrow demand growth, creating a multi-year downtrend in equity utilization for lenders. Generating incremental returns from lending high-fee equities has never been more important, increasing the value of the most-timely market intelligence. With the increased focus on generating revenue from high-fee shares, it has also never been more important for borrowers to push for rate relief when borrow pressure subsides. Intraday loan transaction analysis is an important tool for both sides of the trade.