Global securities finance revenues totaled $870m in December, a 4% YoY decline. December saw the lowest global equity revenue for this quarter which can be attributed to the dwindling EMEA and Americas equity revenues. The general uptrend in borrow demand for global ETPs and ADRs remained intact in December. In this note we'll discuss the drivers of December revenue.

APAC Equity Finance revenues produced a strong end to the year, totaling close to $200m in December. This was driven by the continued growth in Taiwan and South Korea. Taiwan remained the largest contributor in the region with revenues of $54m, a 236% increase YoY. South Korean equity was second with revenues of $45m, a 394% YoY increase and soaring above Hong Kong SAR. South Korea saw increases across the board in balances and utilization, with lending fees in particular driving strong equity finance revenue opportunities for stocks with high borrow demand in the technology sector.

Average fees of almost 3% in South Korea saw 3 of the top 5 revenue generating stocks in APAC come from this market. Video game developer Krafton Inc faced a battle-royale following its IPO earlier in the year and dominated the top revenue generating securities in the APAC region, with equity finance revenues of $11.28m. Indebted property firm China Evergrande Group sat just inside the top 10 this month.

Americas Equity Finance revenues totaled $252m for December, a decline of 42% YoY and 21% MoM. Balances were up 25% YoY but declines in average fee (-53% YoY) and utilization (-8% YoY) contributed to the decline in revenue. Overall, the Americas Equity market brought in $3.8B in revenue this year, a 2% increase from 2020, but profit taking and balance sheet management at year-end led to decreased average balances, down 3% MoM, and average fees, down 21%.

US Equities contributed $225.3m in revenue in December, a decline of 45% YoY, and lending of Canadian Equities brought in $24.7m for the month, a decline of 3% YoY.

The top revenue name in US Equites for December was Bakkt Holdings (BKKT), which maintained the top position from last month but showed declines in both average balances (-49%) and average borrow cost (-30%). A new entry to the top 10 was Matterport Inc (MTTR), a former SPAC name and metaverse stock which saw a 282% MoM increase in average borrow cost and a 22% MoM rise in average balances. Current SPAC stock Digital World Acquisition (DWAC) saw increased activity with average fees increasing 332%. One notable name outside the top 10 was Brightsphere Investment Group (BSIG) which brought in $2.1M revenue off the back of a tender offer deal in December.

EMEA Equity Finance revenues dropped further to $85m in December, just under the 2019 low of $86m. December 2021 revenues were down 22% YoY which was the lowest December total in the past decade. The revenue opportunities that remained were consistent over the past few months, with France ($18m), Germany ($14m) and Italy ($9m) remaining robust with some concentrated specials activity. France also saw some yield on dividend payouts. Italy saw a 71% YoY increase in revenues, mainly due to demand for BMPS which contributed 38% of the revenue for the country.

Revenues from lending American Depository Receipts (ADRs) increased 32% YoY, totaling $45m in December with an upswing of 86% MoM from November, marking it as the highest monthly revenue since March. ADR securities finance revenues were led by Didi Global (DIDI) and Bit Mining Ltd (BTCM), a Chinese bitcoin mining firm. Didi contributed over 60% of the ADR finance revenues with $27m for the month of December. The primary drivers for December's surge were a 43% YoY spike in fees while utilization experienced a similar rise with 19% YoY growth.

Global ETP revenues totaled $61m for December, a 45% YoY increase and up 14% compared with November. The YoY growth continues to be primarily driven by the increase in loan balances, up by 37% compared to last year and crossing the $100bn mark for the first time. Fees averaged 0.69%, a 17% increase YoY, while average utilization remained stable, with ETP lendable assets increasing to $496bn.

The US dominated the top 5 most revenue generating ETPs in December. The iShares iBoxx $ High Yield Corporate Bond Fund (HYG) remained first in the rankings, with $9.54m in revenue, more than double the next in ranking, and contributing to 16% of all ETP revenues for the month. The ARK Innovation Fund ETF (ARKK) also delivered significant lending revenue for investors, with an average loan balance of $1bn, the highest YTD. 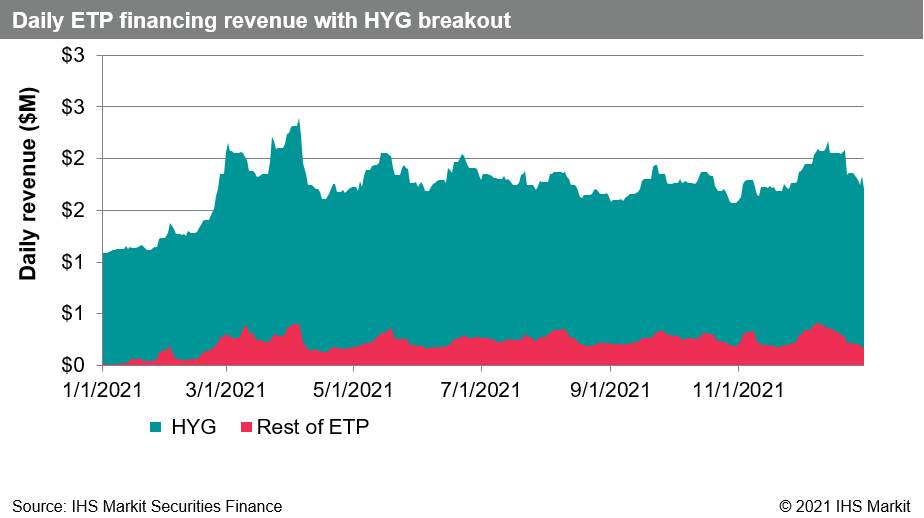 Corporate bond lending revenues came in at $62m for December, an 86% YoY increase, and setting the record for 2021. Demand continued to increase, with average balances up 45% compared to December 2020, while fees remained flat. Convertible bonds contributed 8% of December corporates revenue, up 328% YoY.

Global securities finance revenues dropped by 4% YoY in December, the drop-off marking it as the lowest monthly revenue in Q4. Borrow demand for ADRs and ETPs continued to boost global returns in in a record setting year for revenues in both asset classes. December revenues underwhelmed mostly as a result of lower returns from Americas and EMEA equities which can be attributed to a plunge in average fees in the Americas and a lack of specials revenue from Europe. Borrow demand for corporate bonds continued to increase with nine consecutive months of YoY increases in intrinsic income, with December having the most monthly revenue YTD.