Global securities finance revenues totaled $804m in April, a 15% YoY increase. The YoY increase was primarily the result of equities, with all regions showing YoY growth. Average daily global revenues decreased by 2.3% MoM compared with March. Equity special balances remain well below the YTD peak in January, but it is worth noting they increased 15% MoM. In this note, we'll discuss the drivers of April revenue and outlook for remainder of Q2.

Americas equity revenues came in at $242m for April, a 10% YoY increase and a 9% increase in average daily revenue compared with March. The YoY increase is the result of growing loan balances, with fees declining YoY. The decline in average fees was driven by low-fee balances growing faster than special balances YoY, which is unsurprising given that equity markets were just starting to recover from the Q1 crash in April 2020.

US equity revenues came in at $218m for April, a 15% YoY increase. Average daily revenues increased 13% compared with March, however, returns remain a far cry from January's record return. US equity special balances increased by 24% MoM, with an average of $8.8bn in April. Special balances are defined in this note as balances with a fee greater than 500bps.

The highest revenue generating US equity was Blink Charging Co, the result of increasing fees during the last half of March which persisted through April. It is interesting to note the Grayscale Bitcoin Trust continues to see elevated borrow demand and loan balances have consistently hovered around $2bn since early March. 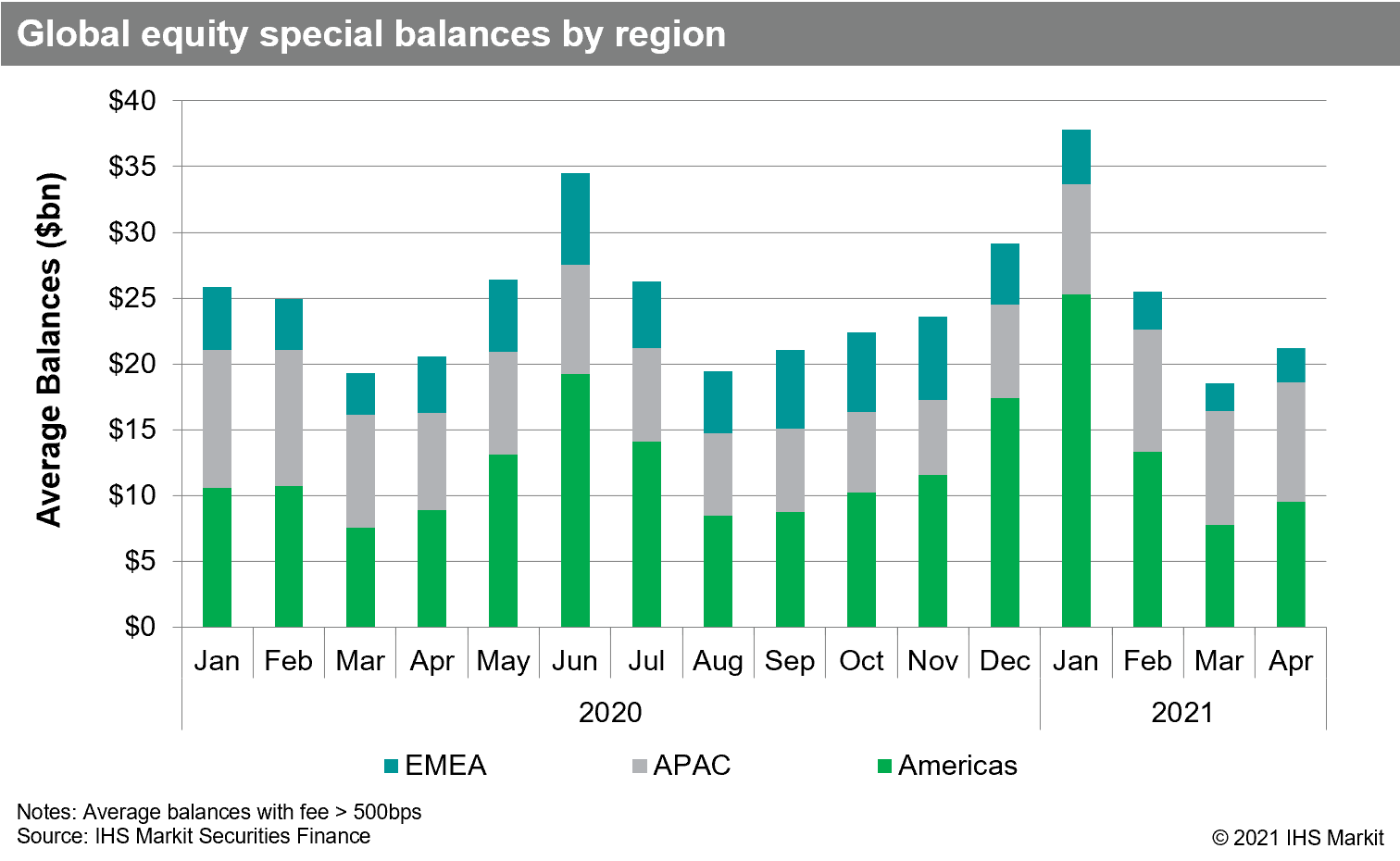 Canadian equity lending revenue of $23.4m reflected a 23% YoY decline. The YoY decline was primarily driven by a 50% decline in average fees, while balances increased by 56% YoY, with loan balances extending uptrend from the YTD low point in February. Canadian equity specials balances averaged $727m for April, the highest monthly average since August 2020.

European equity returns increased by 24% YoY for April, with $144m in monthly revenue. The YoY upswing primarily resulted from the YoY increase in loan balances, though average fees did also increase. France listed equity revenue increased 48% YoY, led by shares of Air France Klm Sa, which saw increased borrow demand around the firm's capital raise in April. The resumption of dividend payouts is likely to boost borrow demand from the securities finance channel and IHS Markit Dividend Forecasting expects a 17% YoY increase in payout for EMEA issuers in 2021.

The largest market, Japan equities, delivered $48m in March revenues, a 19% YoY increase. Hong Kong equity finance revenues increased by 54% YoY in April. Apart from Malaysian firm Top Glove Corporation, HK equities have generally been atop the APAC leader board YTD, however Singapore firm Jardine Strategic Holdings delivered just over $2m in April revenue on the back of the firm's acquisition the shares it did not already hold in Jardine Matheson Holdings Ltd.

South Korea's short selling ban has concluded for larger market capitalization firms, with new short sales will be allowed for the benchmark Kospi 200 Index and the small-cap Kosdaq 150, likely to be a boon for shareholders seeking to generate revenue by lending shares. 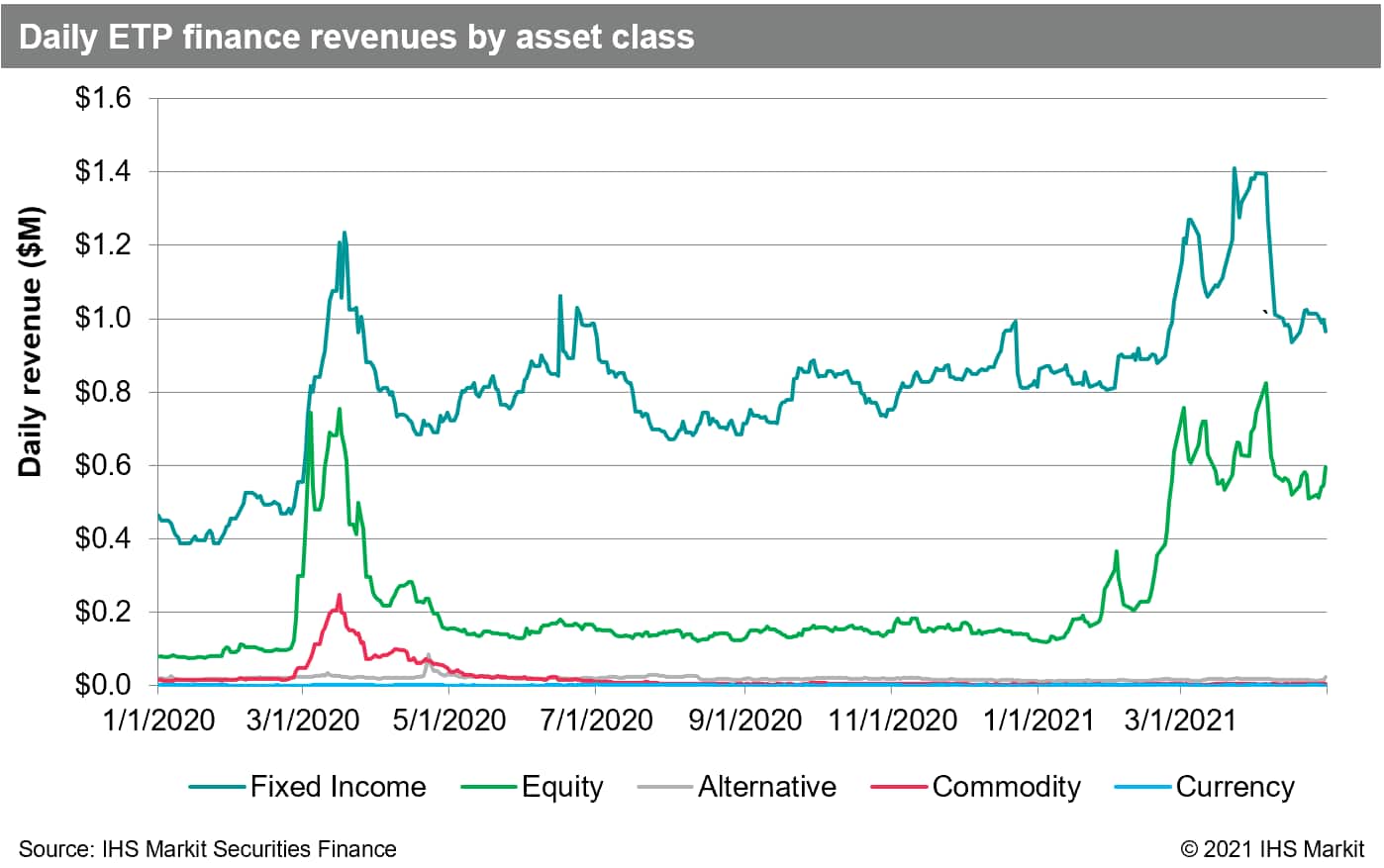 Corporate bond lending returns came in at $37m for April, an 8% increase YoY and the first YoY increase in monthly revenue since 2018. The Illumina convertible bond was the most revenue generating corporate for the second consecutive month, boosting overall convertible revenues by 65% YoY, though still only accounting for 5% of corporate total.

Government bond borrow demand remains robust, with $1.26T in positive-fee global balances for April reflecting an 29% YoY increase. Revenues totaled $130m for April, a 9% YoY decline compared with April 2020. US government bond lending revenue came in at $76m for April, a 20% YoY decrease. The most revenue generating bond was the UST 10Y due Feb 2031, repeating the role as top earner, albeit delivering only one third of the March return. Returns from lending European sovereigns were $43m for April, a 17% YoY increase.

Overall revenues increased 15% YoY for April, as global loan balances continue to trend upward. US and EMEA revenues recovered some ground after declining during the latter portion of Q1. Current and former SPACs continue to percolate toward the top of the US leader board, a phenomenon likely to continue as the record outstanding SPACs seek business combinations over the remainder of 2021. ETFs and ADRs continue to deliver YoY revenue growth, however the most revenue generating constituents cooled in April relative to March. Fixed income borrow demand remains robust, with corporate bond demand trending higher with total on-loan balances at the highest level since 2008.