April securities lending revenues totalled $700m, a decline of 14% compared with April 2019. Compared with March, the MoM average daily revenues declined by 5.6%. Total equity lending revenues, including ETF & ADR, came in at $519m for April, a 20% YoY decline and 10% MoM decline. Lower balances and more narrow fee spreads were the general theme for April, however there were some causes for joy, notably including sovereign debt and ETF returns.

Short squeezes are a characteristic common to equity market rallies following significant short-term declines in equity prices. That has certainly been the case for the rally from the March lows. The most expensive to borrow US equities outperformed less expensive to borrow by 4.7% in April; Outside of US the most expensive to borrow outperformed by just over 5%. While the short squeeze has been challenging to navigate for long-short funds, it has so far added to specials balances in the US, which increased by 22% over the course of April to end the month at $9.5bn.

US equity lending revenues came in at $190m for April, an increase of 2.7% YoY. A headwind on the horizon for YoY comparison of US equity returns is the run of IPOs which kicked off with LYFT on March 29th, 2019. Revenues in the 2nd half of 2019 were 45% higher than in the first half, which will be a tough act to follow.

Match Group Inc (MTCH) was the most revenue generating security globally in April, with $20m in monthly revenue compared with $27m for the first quarter of 2020. The upswing in returns was primarily the result of fees averaging 9.45% in April, more than double the average fee for Q1, however balances also increased by 8%. <span/>

One demand driver of 2019 which sprinted into 2020 before stumbling in March and April is the Cannabis sector. Equities related to the nascent industry generated 14% of North American equity revenues in Q1. That ratio fell to 9% in April, with just over $20m in monthly revenue, down from $51.6m in January. Given the importance of the Cannabis sector to Canadian equity lending revenue over the last year, it's unsurprising that April saw the lowest monthly Canada equity lending revenue of 2020, down 30% YoY.

Asia equity lending revenues continue to be subdued, with April revenues of $120m reflecting a 29% YoY decline, matching the 29% YoY decline in March. The blame for the shortfall is entirely lower fees, with balances in the region increasing by 4.8% YoY in April. Asia ETF lending revenues continue to increase, albeit from a relatively low base, with $2.9m in April revenue reflecting 230% YoY growth and the most for any month this year. 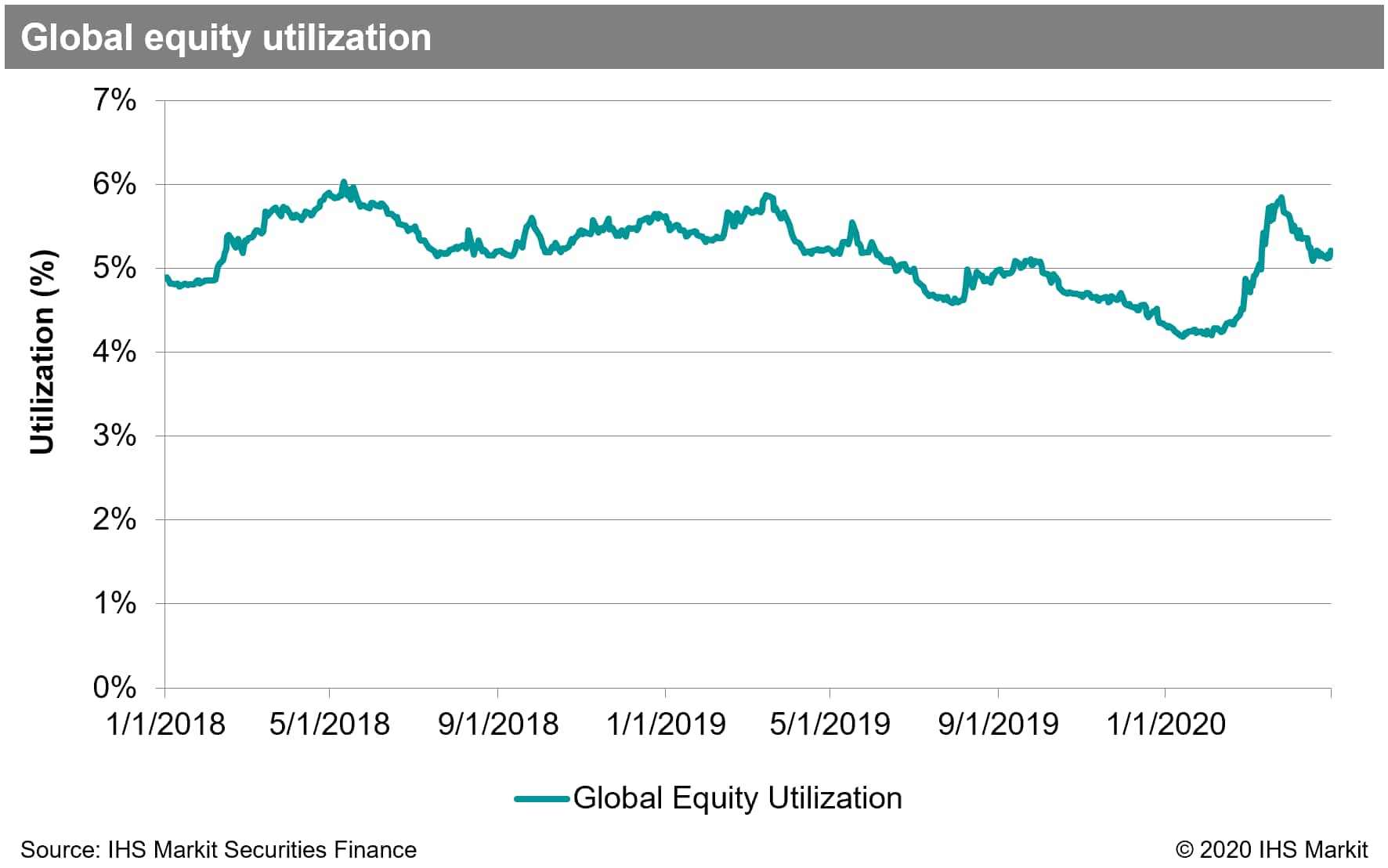 Equity lending in Europe remains in a downtrend, with $116m in April revenues reflecting a 41% YoY decline. Wirecard Ag (WDI) continues to be the most revenue generating security in the region, with $6.5m in April revenue. The WDI corporate bond has seen declining borrow balances, though that likely relates as much to its' being the most expensive to borrow corporate bond globally as it does to an underlying desire to borrow the bonds.

ETF lending revenues declined 35% compared with the stellar March return of $53m, however the $34.8m in April revenue does reflect a 69% YoY increase. The blame for the shortfall is primarily declining spreads for credit funds. Borrow demand for credit related ETFs increased in early March, however fees had already substantially declined by the time of the Fed announcement on March 23rd, and continued to decline thereafter. While declining spreads for credit ETFs did have a depressing impact on returns, average balances are also in decline from the March peak, with the $62.6bn in avg April balances down 14% MoM.

Government bond lending continues to deliver increased spread income, with fee revenues coming in at $143m in April, a 37% YoY increase; Returns were relatively flat compared with March, -1% MoM. North American sovereign debt lending revenues came in at $103m for April, up 2% MoM, while European and Asian issuer revenues were down MoM 8% and 6%, respectively.

At the outset of 2020 there was some question about whether equity special demand of 2019 would persist, while fixed income appeared moribund, particularly sovereign debt lending. Then came COVID-19 and the substantial shutdown of the global economy which led equity and credit markets lower and prompted unprecedented central bank response. While markets have stabilized, uncertainty reigns and corporate managers are under pressure to deliver for a variety of stakeholders. IHS Markit Dividend Forecasting team anticipate $280bn+ in global dividend reductions for 2020. That reduction in income makes securities lending spread and collateral reinvestment returns even more precious in 2020.

Looking forward there are a few drivers that could help returns, and returns to lendable assets, to increase for the remainder of 2020. A return to relative underperformance on the part of equity "specials" would help to support borrow demand; The underperformance of high-fee equities, gross of fees, is one of the more stark equity quant factors and has been shown to be significant for a range buy side strategies. Lifting the bans on short selling in markets which currently limit the activity would certainly be supportive of increased demand in those markets, and therefore increase returns for long investors as well. More clarity on purchases of credit by the Fed, particularly in high yield, which to date has appeared to be more messaging than market involvement, could increase borrow demand for credit and credit ETFs. Further rate cuts by the Fed could also have a positive impact on reinvestment returns in the short run, however pushing the policy rate negative appears unlikely for now.