Behind every casualty and vessel total loss statistic are seafarers that have lost their lives, been injured, or suffer long-term physical or mental effects. While the number of reported seafarer deaths dropped from 165 in 2015 to 55 in 2016, it rose to 112 in 2019 (figure 1 below) according to the inaugural State of Maritime Safety report published by IHS Markit. 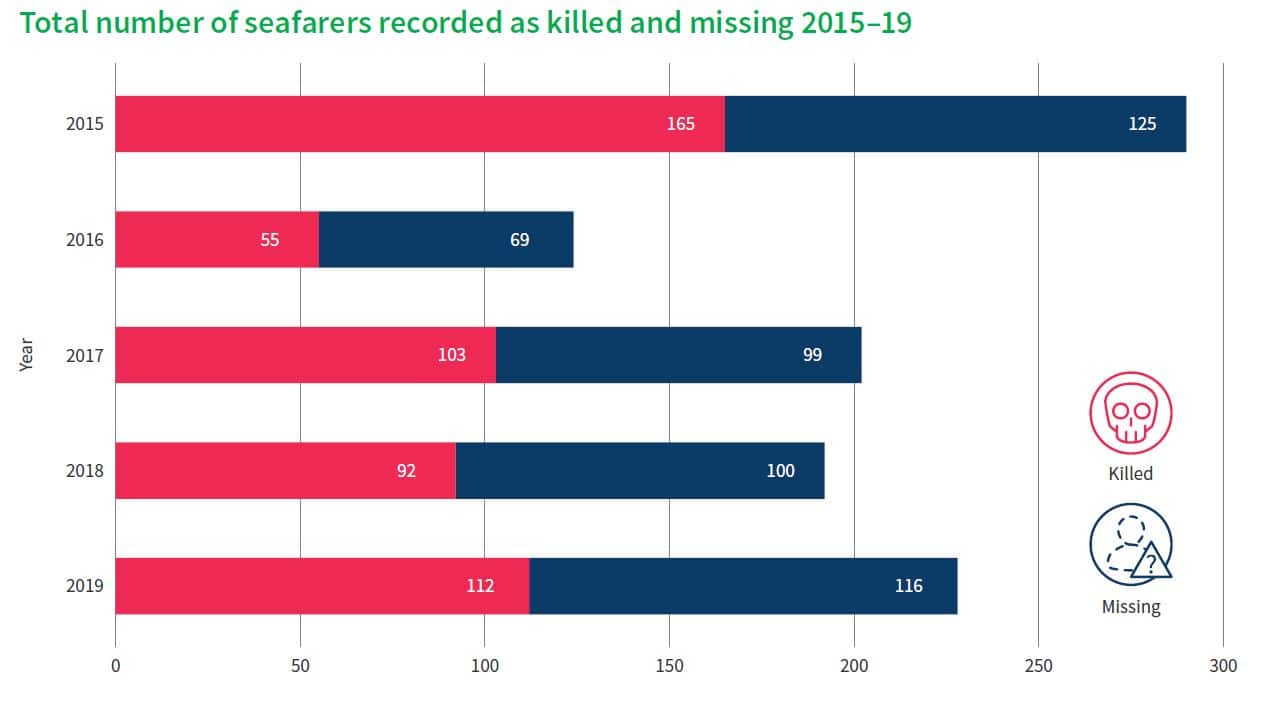 IHS Markit estimates that 400,000 seafarers work on merchant cargo ships; 300,000 on passenger and cruise ships; and an approximate 200,000 crew work on other types of vessels.

With the growing world fleet, the numbers of crew killed are still high considering shipping's increased focus over the last decade on the improvement of safety and environmental performance.

While many of the major incidents that resulted in missing or dead crew might be perceived as rare events, they point to larger concerns that must be addressed. For example, far-reaching safety concerns were found after the October 2015 sinking of the Jones Act container ship El Faro, which resulted in the deaths of all 33 crew members on board.

The NTSB released its report in 2018, which stated that the likely cause for the accident was the master's decision to sail into the path of Hurricane Joaquin, which suggests the captain relied on outdated weather resources, the vessel operator's "weak" safety culture, and poor implementation of bridge resource management principles. The report noted technical problems with the machinery design standards that led to the loss of lube oil suction and vessel propulsion, as well as limited protection of the fire mains from impact damage in the case of a cargo shift, which likely led to the flooding of one of the holds.

Following this incident, the NTSB noted that the vessel's old, open lifeboats were of little assistance in a hurricane, and did not meet modern safety standards. Shortly after the report, the US Coast Guard port state control regime ran a concentrated inspection campaign that focused on open lifeboats fitted for emergency use between 2 May 2018 and1 May 2019. The inspection covered 45 US-flagged vessels with 122 inspected open lifeboats, and discovered 68 deficiencies on 35 of the lifeboats.

Moreover, the increase in extreme weather conditions over the past five years has led the World Meteorological Organisation and the IMO to hold their first joint symposium, 'Extreme Maritime Weather: Towards Safety of Life at Sea and a Sustainable Blue Economy', on 23-25 October 2019. Best practice and emergency response was noted as a major factor given the risk of extreme weather. As most seafarer fatalities have been at sea (310 reported incidents between 2015 and 2019, see figure 2 below), this is a timely concern. 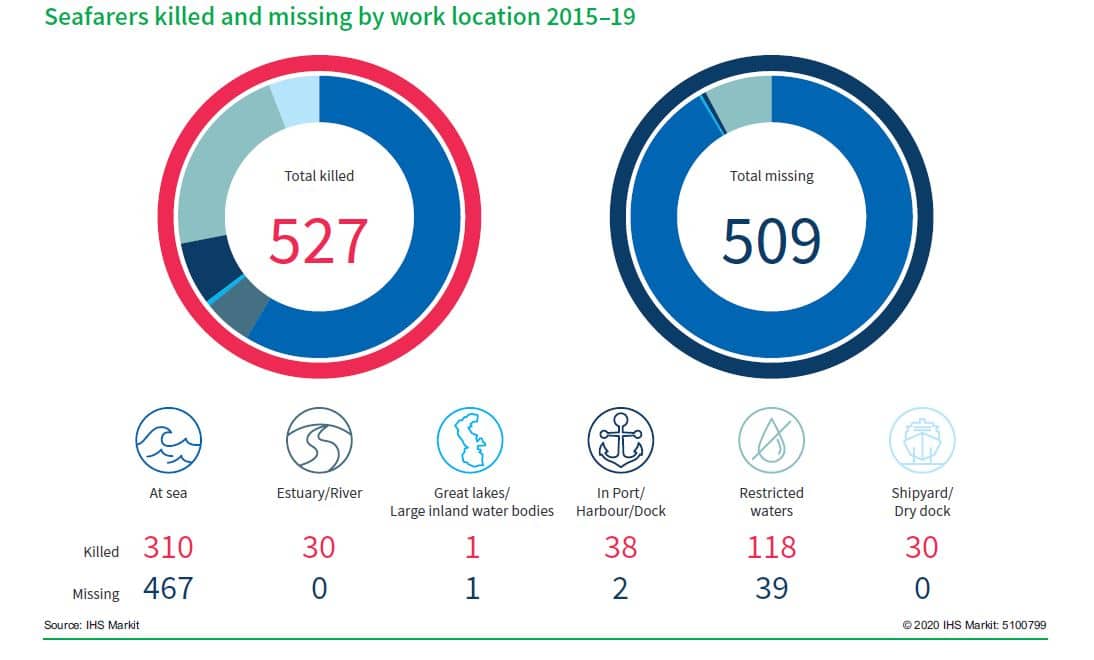 Speaking at the symposium, Peter Hinchliffe, former secretary general of the International Chamber of Shipping and the chair of the Nautical Institute, noted that only 2,500 ships voluntarily provide meteorological data out of an estimated total of nearly 80,000 active ships. There is a growing need for more shipowners and operators to participate in voluntary met data sharing.

Vessel design remains a key issue in preventing crew deaths. In 2018, the International Bulk Terminals Association told the IMO that at least 71 accidents had occurred between 1991 and 2018, resulting in 106 deaths and many severely injured crew, while carrying or handling solid bulk cargoes aboard ships. In 2018, Intermanager conducted a three-month-long industry survey of 5,000 seafarers across 250 vessels. It found a perceived lack of consideration of the needs of crew members during vessel design. Respondents noted poor attention had been given to access areas, and poor ventilation and ability to measure the atmosphere in enclosed spaces.

Notably, the South China and the East Indies zones have the highest overall number of recorded seafarer deaths (157 deaths) by region (see figure 3 below). Most of these deaths occur while the ship is on its voyage and at least 23 vessels were reported as a total loss.

Meanwhile, there have been 118 seafarer deaths in restricted waters and 30 in drydocks or shipyards. Russia, the Arctic, and Bering Sea, which is second highest in terms of recorded deaths.

Largely, these are as a consequence of fishing and trawling incidents. These incidents have led to 64 of the 68 overall reported deaths, with 63 vessels being reported as a total loss. The East Mediterranean and Black Sea regions has 63 reported deaths, with its numbers mostly split between ship that are en route and those that are manoeuvring. 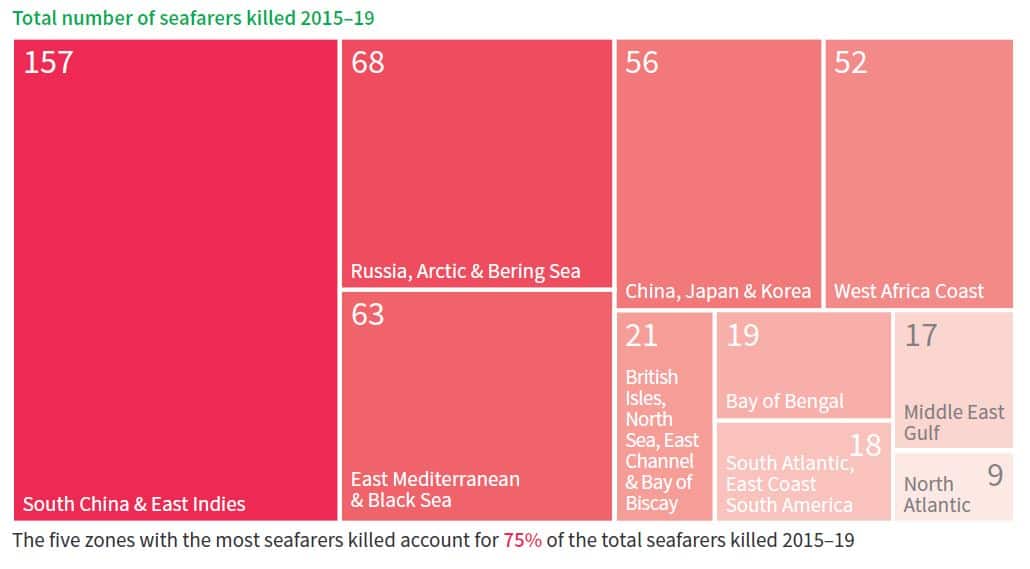