Implications for the energy industry - the vast majority of vessels being fitted with scrubbers purchase fuel on the spot market, so they will rely on HSFO being available at traditional bunker hubs.

Implications for the shipping industry - for the largest vessels, scrubbing economics are very favorable and short payback periods are expected. With container ships now being lined-up for retrofitting, operators are racing to get their ships in the queue to be fitted in a bid to remain competitive in the very intense sector.

As expected 2019 has seen a burst of scrubber-fitted vessels arriving on the water, as ship owners race to complete fittings ahead of the fuel specification change on 1st January 2020. This trend is expected to continue through the remainder of 2019, as the shipyards begin to see waves of vessels arriving for retrofitting, whilst an increasing number of new build vessels with scrubbers fitted rolls out of shipyards.

As of 1st April 2019, the number of ships fitted with scrubbers in service stood at 602, according to data collected via multiple sources including vessel tracking by IHS Markit. The next eight months are expected to be busy, with a further 1,430 ships entering service ahead of 1st January 2020, according to IHS Markit forecasts. This is far lower than the 3,800 vessels, which CE Delft projected in their study undertaken on behalf of the IMO in 2016. 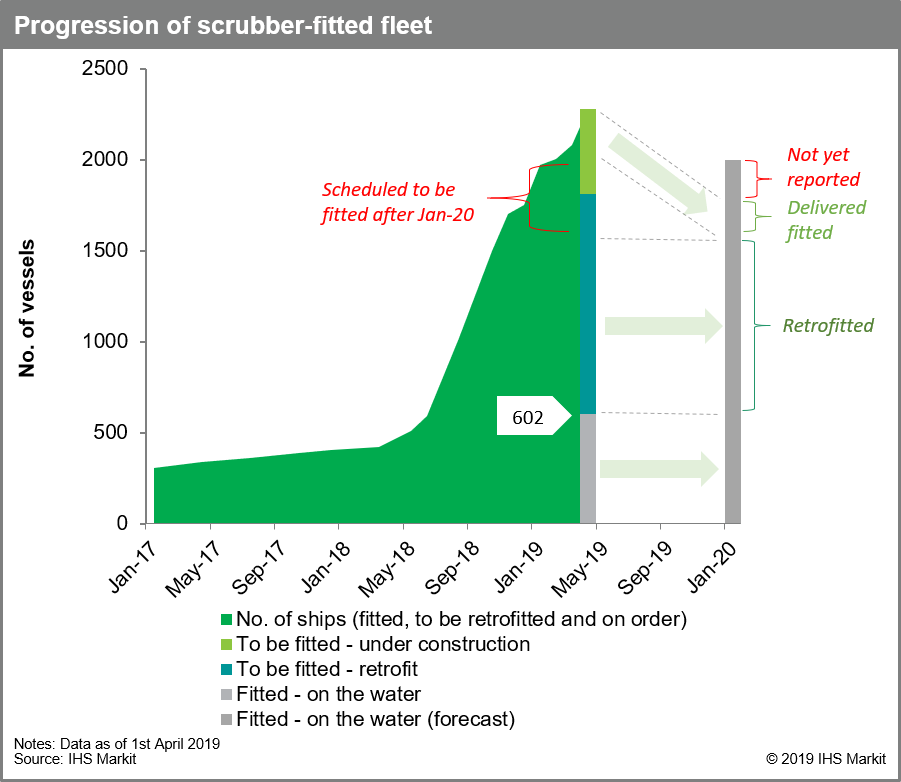 Data collected by IHS Markit indicates that a further 1,674 vessels are stemmed to be fitted with a scrubber (either as a retrofit or fitted upon entry into service). It is apparent a number of these will not be fitted before the start of next year, with some owners already publicly acknowledging that they ordered the systems too late. This number does not include options, or "stock" scrubbers which have been obtained by turnkey service providers.

Scrubbers bans to stem the tide?

Much has been made in the press on the recently announced "scrubber bans" in certain areas of the world, and the impact this will have on the scrubber market. The ports of Singapore (announced in November 2018) and Fujairah (January 2019) both placed bans on the discharge of effluent from open-loop scrubbers in their waters, whilst China announced in January that scrubber water discharge would be banned in its coastal ECAs and rivers. Partial restrictions on scrubber usage are in place in parts of Germany (including the Kiel Canal), Ireland, Japan, Belgium, Norway, Abi Dhabi and US, whilst in April, South Africa went the opposite direction and announced it approved the use of all types in its waters. In most cases, the waters where the bans are taking place are in areas where an open-loop scrubber would not operate effectively (due to the low-alkalinity of the water), therefore the vessel would have to switch to closed-loop mode (if it has a hybrid installation), or simply switch to VLSFO. The areas also form just a small percentage of the entire voyage, with the ship only spending a few days (at most) in the areas with the engines running, therefore most of the engine-running hours will be spent in areas where the open-loop scrubber can be used.

Bulk carriers and tankers leading the way on scrubber installation

Of those vessels fitted and operational, over half fall within the 10,000 - 49,999 gt sector. This is a legacy of the Emission Control Areas (ECAs) reducing maximum sulfur levels from 1%S fuel oil to the more expensive 0.1%S bunkers, whereby a number of vessels with high exposure to these areas were retrofitted with scrubbers, primarily ro-ro's and ro-paxs. The cruise ship sector spans the larger segments, the sector being an early adaptor of the technology, as operators sought to give their vessels as much operational flexibility as possible. These larger segments are slowly increasing their share of the fitted-fleet, as owners look at the higher consuming vessels as best-placed to receive the greatest returns on scrubber retrofitting. With those scheduled to enter the fleet scrubber fitted, the two larger segments will account for 55% of the scrubber-fitted fleet (from 45% currently) in the coming months. 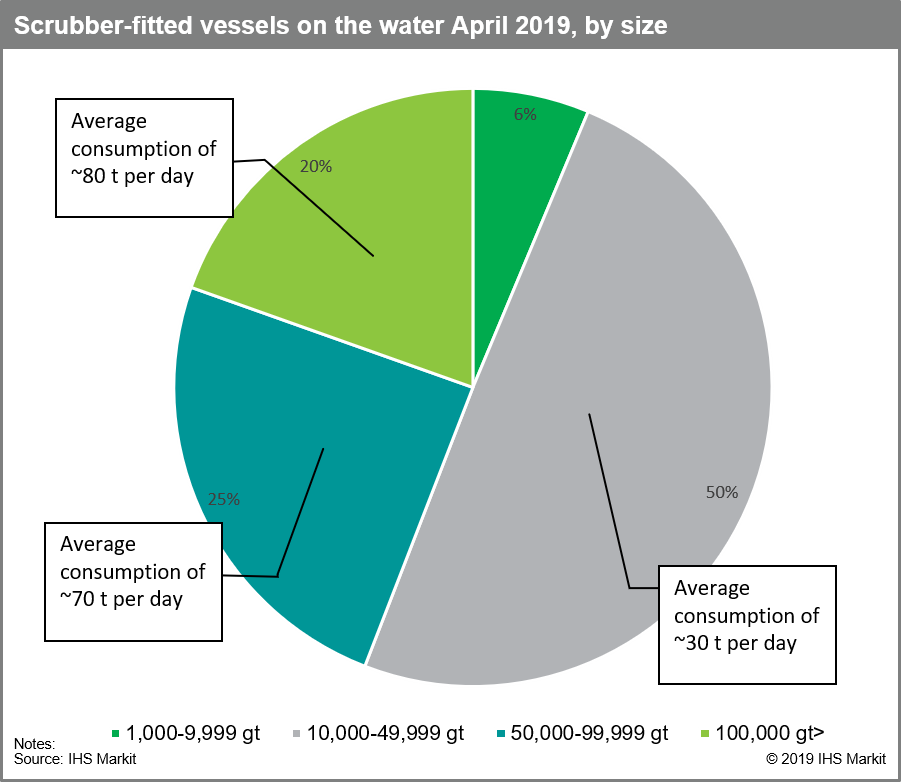 Since January, data shows the number of scrubber-fitted tankers has increased by 74 vessels. As of 1st April, the fleet totalled 140 vessels fitted. Another 550 tankers are expected to be added to this fleet in the coming months, however, like with most ship type sectors, not all will be on the water before the 1st January 2020, with those owners who were late in deciding to fit scrubbers unlikely to have a unit before the fuel change, and therefore missing out on large price advantages predicted in the early months of next year.

So far 36 VLCCs have been fitted and are on the water; around 5% of the operational fleet. The sisters DHT Raven and DHT Lake are the oldest vessels in the sector to have been fitted, both were built in 2004. The retrofits on this pair is an indication of how confident owners are on scrubbers providing a favourable return, even on vessels which are likely to leave the fleet for recycling in the next four to five years. These tankers are recorded as consuming around 90 tonnes a day; with a scrubber-fitted, these tankers which would typically consume 24,000 tonnes annually, could see an annual saving of $4.7 million on a differential of as low as $200 per ton between VLSFO and HSFO, far outweighing the cost of the scrubber, which in the current market is estimated to be around $3 million. 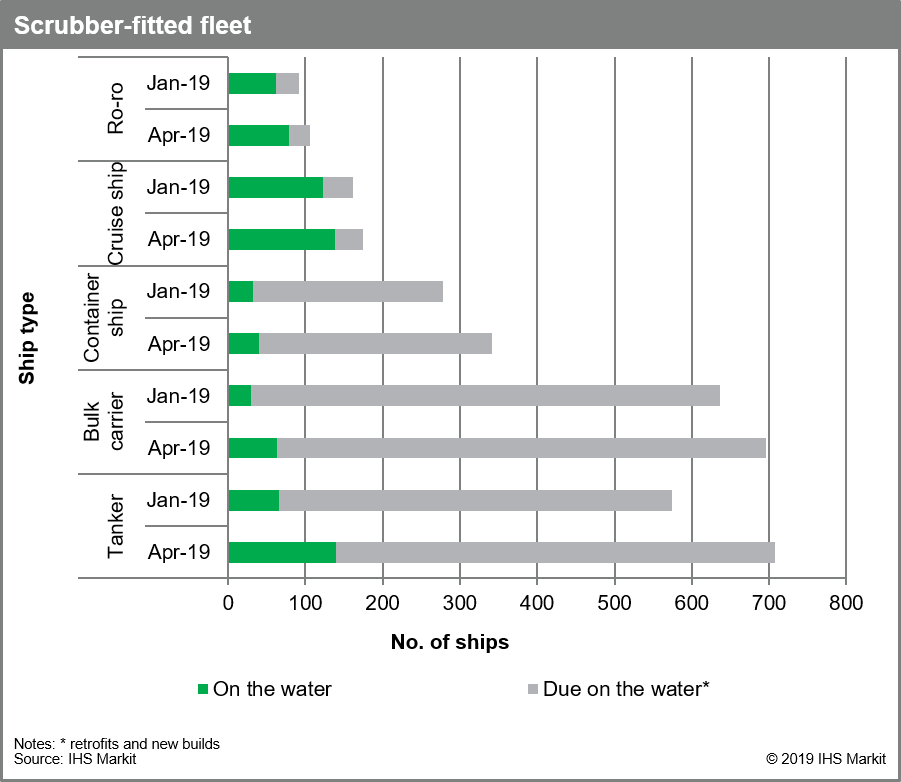 The tanker sector has the largest share of the scrubber-fitted vessels on the water, followed very closely by cruise ships, accounting for 23% of the fleet. Until the start of the year the cruise ship sector had the largest number of scrubber-fitted vessels, with the sector being early adopters of the technology. In Q1-2019, the number of cruise ships on the water fitted with scrubbers increased by 15, and there are only a handful of vessels expected to be fitted in the coming years, most of which are still under construction.

A significant number of retrofits are expected to be seen in the bulk and container markets in the coming months. The number of scrubber-fitted ships in the bulk carrier fleet more than doubled between January and April, increasing from 29 vessels to 63 vessels on the water. According to IHS Markit data, 13 capesize bulk carriers and large ore carriers fitted with scrubbers are now in service, with a further 360 vessels confirmed to be scrubber-fitted in the future. Currently over 500 bulk carriers are confirmed to enter the market, fitted with units in the coming months.

Container operators have been reported to be offering incentives to owners who are willing to retrofit units to their ships, with guaranteed increases in charter rates. Since January, a further 64 container ships have been confirmed as been earmarked for retrofitting; whilst the number of scrubber-fitted container ships on the water increased by eight, to 40. The 16,000 TEU, French-owned sisters, CMA CGM Alexander von Humboldt and CMA CGM Jules Verne are the largest container ships retrofitted so far, with the work being undertaken near Shenzhen in the later months of 2018. These leviathans are expected to be joined by vessels from the major operators' fleets in the coming months, as they attempt to take advantage of the lower fuel costs. It is reported, MSC, Hapag-Lloyd and COSCO are all lining up large container ships for retrofitting, whilst similar-sized newbuild projects for Hyundai Merchant Marine, Evergreen and Yang Ming are all stemmed to be delivered with scrubbers fitted.

The container sector seems to have acted slower than the bulk carrier and tanker markets. This could be due to concerns that there is a chance of losing revenue generating space onboard the vessels, with the units spreading into areas which would have been used for cargo. Whilst the recent retrofits to the CMA CGM container ships seems to have been done utilising the vessels' wide beam avoiding any cargo space loss, retrofits to similar sized vessels have not been so efficient, though owners now appear to be willing to take the drop in overall capacity over lower fuel costs. A prime example is the 400-metre-long Ever Govern which will be delivered in May. She is the eighth unit in a series of 11 20,800 TEU container ships for Evergreen Merchant Marine, though it is the first in the series to be fitted with a scrubber. The unit spreads ahead of the funnel-casing forward over a 40-foot cargo bay - effectively reducing the ships intake by around 200 TEU, compared to the earlier vessels of the series.

The roll-on, roll-off (ro-ro) sector was another group of vessels which saw early adoption of a large portion of the fleet, due to the operational nature of the vessels in northern Europe seeing a high ECA exposure. Between January and February, a further 14 vessels were added to the number of vessels due for fitting, whilst the number of fitted-vessels on the water increased by 17 in Q1.

Q1 saw over 160 vessels leave shipyards and into service fitted with scrubbers. Alongside this, 300 additional vessels were confirmed as to be fitted with scrubbers. Not all these will be installed before the 1st January deadline, with some owners now being happy to just be in the queue for an installation after the IMO regulations come into force. One thing is for sure; shipyards will be kept busy over the coming months as ship owners scramble to ensure their ship can operate on the "cheaper" fuel come 1st January - the next question is, will the cheaper fuel be available to them?