Ethiopian Prime Minister Abiy Ahmed deployed federal troops to Tigray region on 4 November, after claiming that its governing party, the Tigray People's Liberation Front (TPLF), had attacked the military's Northern Command base in Mekelle and a town near the disputed Tigray-Amhara border earlier in the day. Subsequently, the Ethiopian federal Council of Ministers declared a six-month state of emergency in Tigray regional state. On 7 November, Ethiopia's upper house of parliament, the House of Federation, adopted a resolution to establish a transitional government in Tigray region to replace the TPLF regional administration. On 17 November, Ahmed warned TPLF-aligned forces that his three-day ultimatum for them to surrender had expired, and that the "final critical act of law enforcement will be done in the coming days", indicating a new push by federal forces into Tigray. 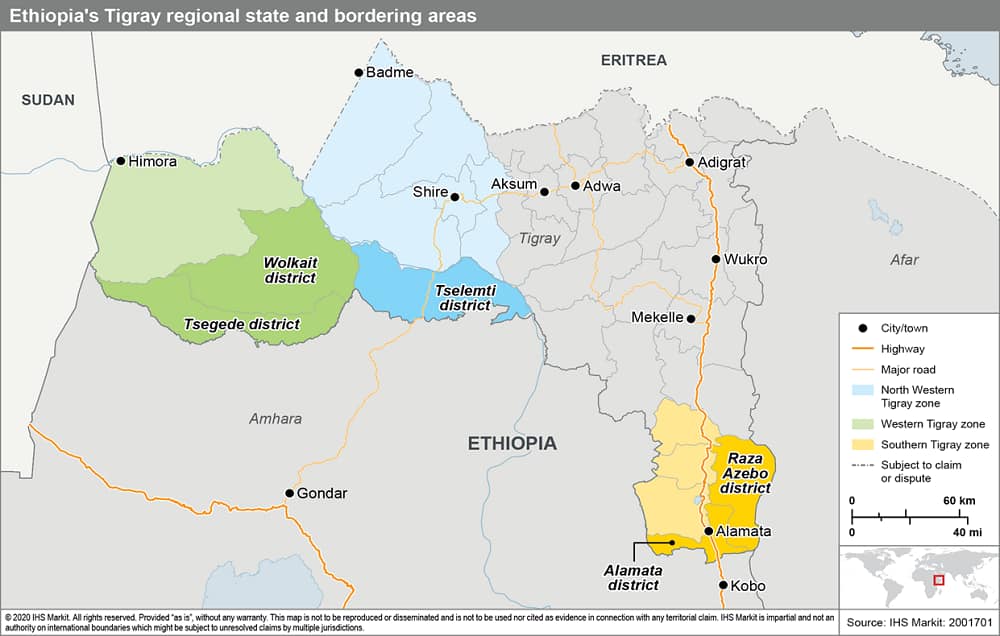 The Ethiopian National Defence Force (ENDF) operation in Tigray aims to secure the Northern Command, key roads, and urban areas and to arrest the TPLF senior leadership. The ENDF has encircled Tigray, with external borders closed by Sudan and Eritrea, and internal borders secured by the ENDF supporting the regional forces and militias in Amhara and in Afar. Since 8 November, the ENDF has launched an offensive from Amhara into western Tigray, with the government claiming to have retaken Dansha and Shire. Supporting the ENDF, Amhara militias are likely to have secured disputed border areas of Welkait, Tsegede, and Raya, including key towns and major roads. Other ENDF deployments are moving into Tigray from Afar, likely aiming to take the regional capital of Mekelle, where the government claims to have destroyed TPLF long-range missiles and significant weapons stocks in airstrikes, although the TPLF demonstrated over 13-14 November that it continues to possess long-range rockets (with attacks targeting the airports of Amhara region's Gonder and Bahir Dar, and Eritrea's Asmara) and artillery. Federal police and the ENDF are pre-emptively disarming Tigrayan ENDF and police officers throughout the country, likely to prevent retaliation.

The most likely scenario is that, by January 2021, the federal government will succeed in broadly regaining control over key Tigrayan cities, including the Northern Command base, but that fighting featuring heavy weapons use by both sides will continue through the end of 2020. This continued intensity of fighting increases the likelihood of widespread destruction of assets in Tigray (and to a lesser extent in the neighbouring areas of Eritrea and Ethiopia's Amhara and Afar regions) as a result of artillery, rockets, and airstrikes cumulatively multiple times a month, affecting airports, urban areas, power infrastructure, major commercial projects, including mining and industrial parks, and military bases, as both sides use heavy weaponry in attempts to deny the other control of them. Eventual federal control would be achieved by arresting or killing senior TPLF members and establishing a transitional government in regional capital Mekelle with senior loyalist Tigrayans. Federal control would also extend to other major towns such as Shire and key inter-city highways (such as the A2 and B30) during daylight hours. However, there will probably be continuing TPLF support in northern Tigray, particularly home areas of senior leaders including Adigrat, Adwa, and Axum.

The TPLF is likely to retreat to strongholds in the northern parts of the region's mountainous terrain and deploy insurgency tactics, especially around Adigrat and to a lesser extent around Raya in southern Tigray. Smaller towns and major highways, particularly in rural areas, would likely be subject to small-arms attacks targeting federal forces and non-Tigrayan road travellers. TPLF-aligned fighters would also likely launch night-time attacks in Shire, Wukro, Axum, Adigrat, and Mekelle to undermine government control. Other tactics by TPLF elements would probably include road ambushes and improvised explosive device (IED) attacks targeting Tigray transitional government officials and Tigrayans and militias loyal to the central government. There will be a high risk of collateral damage and targeted attacks against commercial assets such as mines guarded by the ENDF and perceived to be contributing to the federal government's revenues, particularly if ownership of them is taken over by perceived pro-government entities or individuals.

Scenario 2: The TPLF would still retain control of cities and territory in the Aksum-Adigrat-Mekelle triangle

In a less likely scenario, in January 2021 the TPLF would still retain control of cities and territory in the Aksum-Adigrat-Mekelle triangle, having maintained the cohesion of its forces (including ENDF defectors) and its control of heavy weaponry during this time.This scenario would likely entail TPLF control of the Northern Command base, access to the Sudanese or Afari borders for supply routes, and control of the air-defence systems around Mekelle. This would increase the likelihood of a declared ceasefire between the two sides, but mutually exclusive positions on key issues (particularly the TPLF's continued possession of military weaponry and the freedom of its leadership) would likely prevent a more formal peace agreement. This would leave the opposing forces deployed in a state of war-readiness, with regular flare-ups of fighting (including the use of artillery, rockets, and air strikes) along the line of contract during 2021. Both collateral and targeted damage to nearby airports, urban areas, highways, power infrastructure, and major commercial assets would be likely during such flare-ups. The likelihood of this scenario would be increased if the Eritrean military responds to the TPLF's 14 November rocket attacks on its capital Asmara with confirmed military incursions into Tigray against the TPLF. The TPLF has already claimed that Eritrea has been supporting the ENDF operations against TPLF-aligned forces with ground troops, and with shelling in the border town of Badme and Zalambessa. The deteriorating humanitarian situation, as well as direct Eritrean involvement, would bolster the TPLF's appeal to the local population and calls for broader mobilisation. This would serve to reinforce the TPLF's ranks, which it claims number up to a quarter of "a million well-equipped fighters", but in reality, probably amount to significantly less.

In both scenarios, the TPLF is likely to encourage other ethno-nationalist groups to stage anti-government protests and attacks in order to stretch federal forces. The TPLF is also likely to encourage Oromo opposition groups to resume violent protests and roadblocks in major cities with large Oromo populations, such Harar, Ambo, Adama, Dire Dawa, and the outskirts of Addis Ababa. The TPLF-aligned Oromo Liberation Army (OLA) will likely escalate its ongoing insurgency in Wellega, increasing terrorism and civil war risks in western Oromia.