Saudi Arabian Crude Oil Exports: Focusing on China, as flows to the US decline

Exports of OPEC members seem to have further declined in February, with the overall change month-on-month remaining around -6.7%, like what we saw a month before. The interesting thing to observe is that the second half of the month turned to be much more active than the first half in terms of loadings. This resulted in the month-on-month change in terms of million barrels per day turning positive, surpassing 3%, for the first time since August 2018. But this didn't mean a significant change in the market's sentiment, at least for now. February's levels still stand around 10% lower year-on-year. 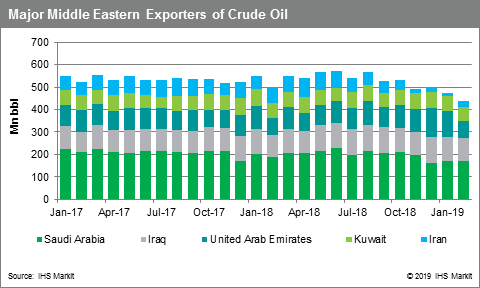 Focusing on Saudi Arabia, the country's crude oil exports to the US have fallen sharply since October 2018, but with February's volumes recovering significantly after the dramatic decline in January, which was driven by Saudi Arabia's decision to cut its production by more than agreed at December's OPEC+ meeting. This supported oil prices to an extent, but meanwhile the increased US production sets an obstacle that can't be ignored. For refiners in the US West Coast, there aren't many options for suppliers, which allows us to expect flows from Saudi Arabia not to decline further, at least for long. 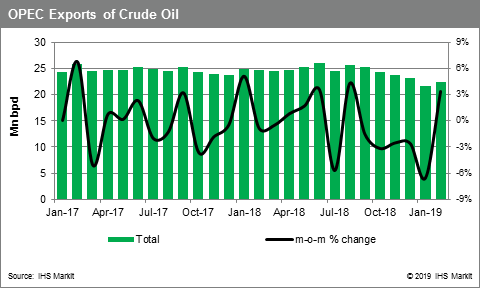 But there is another trend developing in the Saudi Arabia flows that we should highlight. The Kingdom has been reporting much higher shipments to China during the last couple of months, with the trend expected to further develop in the near-term. Saudi Arabia oil heading to China is set to increase further this year. Last year, Saudi Arabia exported less than 1 million bpd to China, but Saudi Arabia's aggressiveness seems to match with China's thirst for more crude. Flows averaged 1.02 million bpd in January and reached to 1.27 Mn bpd in February. If this trend lasts, this could rise to 1.5 million bpd in March. This would allow Saudi Arabia to get positioned better for the long-term, as China, unlike the United States, relies on imports to satisfy demand, having no abundant local production capacity.

Saudi Arabia oil exports are expected to remain low and potentially drop further, as the Kingdom will proceed with production cuts of half a million barrels daily more than their quota.

The growth observed in flows from Saudi Arabia to China has been supported by the rising demand across major Chinese buyers. State-owned Aramco seems to be rather determined to expand its market share in China by finalizing deals with new and independent refiners, after years of focusing almost exclusively on state-owned entities. 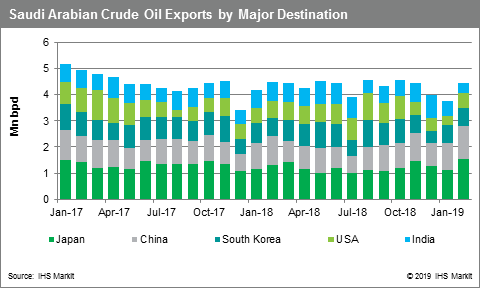 Saudi Arabia hasn't been the biggest source of crude oil for China for the past three years, since Russia surpassed the Kingdom as the top crude supplier to China. This was driven by a new pipeline which allowed Chinese private refiners ("teapots") to absorb more Russian oil. But Aramco now looks much more aggressive, having quickly moved to seal long-term supply deals targeting to become China's primary supplier once again.