Samsung has launched the Galaxy S8, its newest smartphone, amid great fanfare in the most ambitious initiative yet from the company to stay ahead in the mobile smartphone game. The latest salvo from Samsung also shows how it's keen to attain leadership in the smartphone landscape, a nearly saturated but still highly competitive space that remains key to retaining subscriber loyalties and winning new converts.

The introduction of the Galaxy S8 comes at a delicate time for the embattled South Korean electronics giant, which is eager to put behind the challenges associated with the Galaxy Note 7 after exploding batteries prompted a worldwide recall of the phone.

One element of the new phone's design calculus is its focus on ergonomics, rather than on brute size alone or how large the screen could be. Samsung achieves the trade-off between size and display design with a new aspect ratio of 18.5:9, which gives the phone a longer and slimmer shape than any of its rivals but still allows the device to be held easily by the hand. The S8's aspect ratio compares with the 18:9 spec of the new LG G6 unveiled at Mobile World Congress, and with the more common 16:9 aspect ratio found in the Apple iPhone and in other smartphones currently on the market.

The new design language likewise increases the screen size as much as possible within the physical confines of the phone. Samsung does this by expanding the screen to the outermost edges of the device. Moreover, the S8 relocates the fingerprint sensor to the back of the device, which results in the elimination of plenty of bezel space that used to surround the screen, thereby freeing up more room for the screen. The back and screen designs for the S8 are shown below. 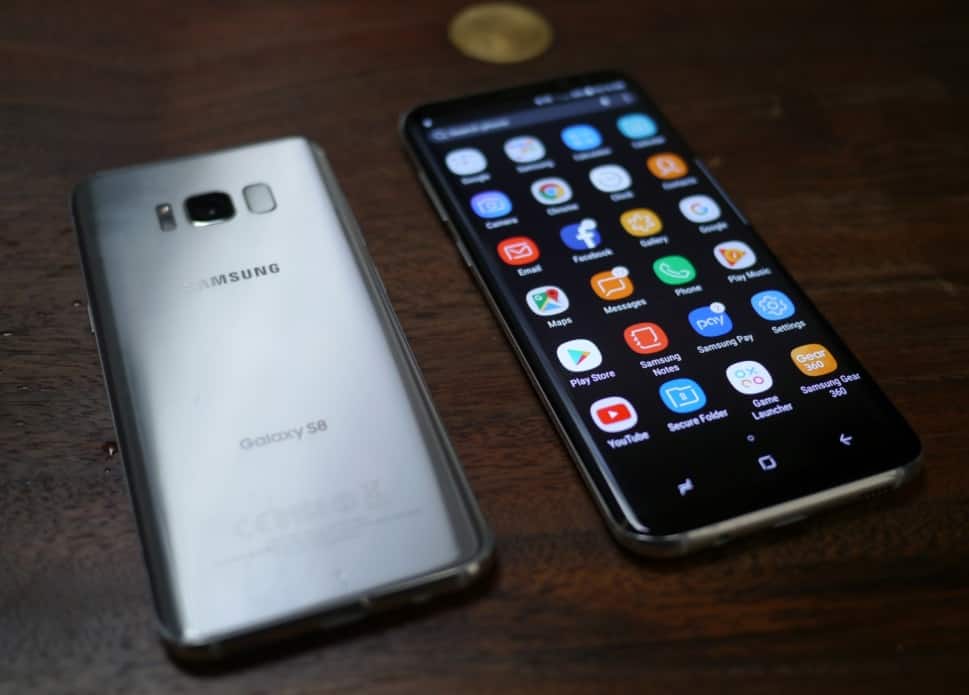 All told, the distinctive design philosophy of the S8 coincides with the new "super-cycle" in smartphone design now occurring, as players-especially the giant brands-strive for differentiation.

The display panel for the Galaxy S8 comes from in-house manufacturer Samsung Display, with the touch feature integrated into the display. The cover glass, provided by New York-based Corning Inc., matches the curved or flexible display form factor of the S8. The display showcases a special 2960 x 1440 resolution instead of the standard 2560 x 1440 setting-due likely to the landscape mode that the phone offers for multimedia presentations.

A commanding feature of the S8 is its new AI platform, Bixby, which is also the name of the phone's digital assistant. Like Apple's Siri, Google's Assistant, Microsoft's Cortana, and Amazon's Alexa, Samsung's Bixby allows voice commands to direct the phone in carrying out specific tasks it is programmed to do. But unlike most voice assistants that Samsung says function more like glorified search engines, Bixby is described as a simple, conversational interface that lets users direct the phone to carry out tasks (example: ask the phone to find a picture and send it to a contact in your email).

Bixby is the product of years of development after Samsung introduced S-Voice assistant on the Galaxy S4. The arrival of Bixby means Samsung won't have to rely anymore on Assistant or other similar apps from its Android partner Google, which is increasingly becoming a direct competitor. Bixby will be available initially only on the S8, but Samsung plans to roll out the platform to all other devices in the wide-ranging Samsung ecosystem. In the near term, Samsung plans to use its recent acquisition of Viv to drive Bixby's capabilities beyond native phone actions and to provide extensibility to work with third-party applications.

Aside from Bixby, a prominent enabling technology of the Galaxy S8 is gigabit-LTE capability, which empowers the phone to support theoretical speeds of up to 1 gigabit per second, or fifty times faster than the average LTE network. An upgrade on existing cellular LTE technology, gigabit-LTE became live first in Australia in February and is also now operational in parts of the United States, such as in New Orleans from mobile carrier Sprint. The S8's gigabit-LTE capability makes the phone the very first offering the feature to ship in volume. The Sony Xperia XZ Premium is another phone that will offer gigabit-LTE speeds, according to the Japanese maker, but the phone has yet to ship. Motorola and China's ZTE are two other brands likely to feature the same high-speed capability for their next high-end phones, but any plans for release are still to come.

Pushing into the enterprise

As part of Samsung's continued extension into enterprise play, the S8 is designed to work with its newly developed docking station called DeX. Samsung says DeX is a plug-and-play solution that will let users hook up the S8 to a monitor, keyboard, and mouse, allowing the phone to work like a desktop computer and for information to be pulled straight off the device.

The approach is similar to that taken by Microsoft in Windows 10 Mobile, which has a Continuum mode equivalent to what DeX hopes to do. DeX is aimed at highly mobile users and is the latest addition to Samsung's expanding suite of enterprise offerings, including the company's BYOD-or bring your own device-solutions and its Knox security platform.

The S8 will also work with Samsung's SmartThings connected-home ecosystem to work with automation and Internet of Things (IoT) devices.

In view of the premium features borne by the phone, a higher bill-of-materials (BOM) tab is expected with the Galaxy S8. As part of its Teardowns & Cost Benchmarking service, IHS Markit will soon conduct a complete physical disassembly of the phone in a breakdown of costs covering the Galaxy S8's component selection, parts suppliers, design strategy, and device capabilities.

The S8 is available in two sizes: the S8, with a 5.8-inch screen; and the S8+, with a 6.2-inch screen. For the phone's application/baseband processor, the S8 will replicate the approach taken by Samsung with the S7-offering either the Snapdragon 835 from San Diego's Qualcomm; or the Exynos 8895 from the phone's own in-house manufacturer, Samsung Electronics. The dual-chipset strategy allows the Galaxy S8 to work in both the US and the international markets, depending on the kind of mobile networks in place, and to offer the phone with the widest possible array of mobile operators throughout the globe.

For additional information, see the IHS Markit news release on the materials cost of the Galaxy S8. And read our Market Insight on how Samsung is seeking, via the S8, to re-establish its reputation for innovation.