Our data analysis has identiﬁed key patterns in jihadist terrorism in the Sahel regional countries of Burkina Faso, Chad, Mali, Mauritania, Niger, and Nigeria since 2015.

Our data shows an overall rise in the rate of jihadist attacks across the six Sahel countries of Burkina Faso, Chad, Mali, Mauritania, Niger, and Nigeria since 2015. The number of attacks was 163 in January 2015, which rose to 781 in May 2018.

Al-Qaeda in Islamic Maghreb (AQIM) has successfully expanded its presence in the Sahel region. This was predominantly facilitated by the merging of jihadist groups' activities in the Sahel and encouraged by the territorial demise of the Islamic State in Iraq and Syria as of mid-2017, which has led Islamist militants to seek new destinations to relocate to. The political instability in Libya provided the necessary conditions for the transit of both jihadists and arms into the Sahel, facilitated by the country's poorly guarded desert border. Moreover, AQIM has taken advantage of existing trafficking routes in desert and forest areas across the region.

Counter-terrorism operations encouraging pooling of jihadists under JNIM
IHS Jane's Terrorism and Insurgency Centre (JTIC) notes that, from 2015 to 2017, the overall number of attacks and fatalities in these Sahel areas increased by 80.2% and 62.5%, respectively. The increased frequency of attacks in the Sahel region indicates that several jihadist groups are co-operating. This is most probably due to the protests for a peace accord in Mali that jihadists intend to prevent and to the stepping up of counter-terrorism operations in Sahel, such as the French military Operation 'Barkhane', and the joint force of the group of five Sahel countries (G5 Sahel; Burkina Faso, Chad, Mali, Mauritania, and Niger).

In March 2017, four smaller jihadist groups operating in the Sahel, representing different ethnic groups, merged into one entity, Jamaat Nusrat al-Islam wal-Muslimin (JNIM), to combat counter-terrorism forces. JNIM, which pledged allegiance to AQIM, gathers members from different ethnic groups, providing AQIM with unprecedented geographical and social reach within the Sahel. This has allowed it to expand its support networks, including social support for recruitment, financial support, and the use of criminal networks. For instance, in 2012, Ansar Dine's leader, Iyad Ag Ghali, who is now heading the JNIM coalition, co-operated with the Malian Tuareg separatist group, Mouvement national pour la libération de l'Azawad (MNLA), to take control of the Malian northern region. The MNLA and Ansar Dine, however, split due to the divergence in motivations and beliefs. While Ansar Dine aimed to establish an Islamic state in the Sahel countries, the MNLA had a secular separatist goal. Ansar Dine has drawn from ethnic conflicts in Mali since 2012 by ensuring Songhay and Fula groups' opposition to Tuareg rule, leading to the MNLA's loss of control of the city of Gao in favor to Ansar Dine. 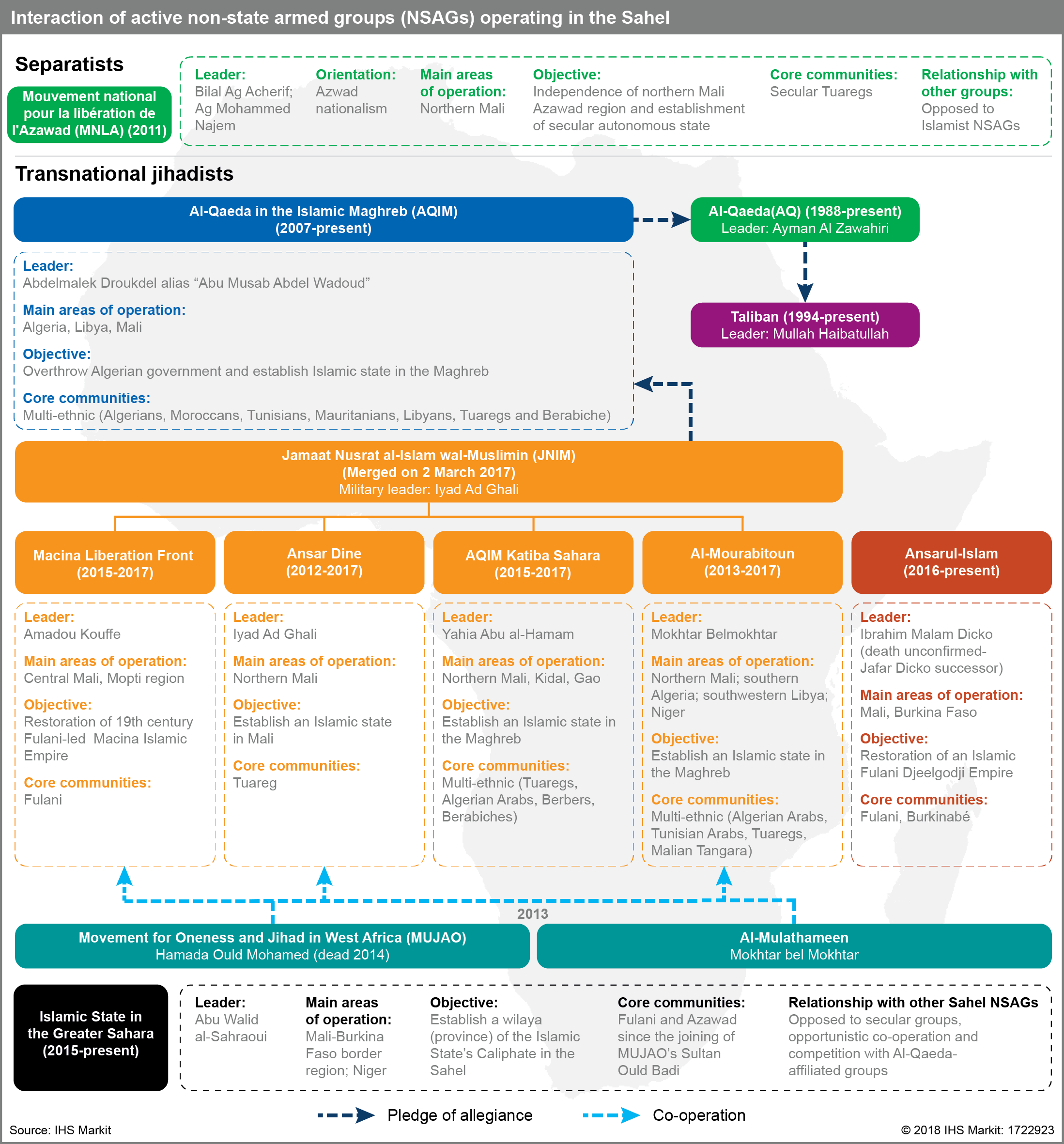 Our data shows that, since 2017, AQIM has maintained a constant level of attacks and that attacks by AQIM are immediately followed by larger and more frequent attacks by JNIM. The resemblance in attack type and close timeline suggest that AQIM is directing JNIM. Similarly, attacks by JNIM are followed by the Islamic State's attacks. However, this suggests that the Islamic State is most likely seeking to reinforce its presence in the Sahel but has more difficulty in doing this than JNIM, mainly because of the latter's advantage in having established a wider local network of affiliates. To be able to maintain this local network, AQIM is likely increasingly drawing on local grievances emphasizing the government's preferential treatment of foreign companies at the expense of the local population.

Changing priorities
AQIM made several statements in 2017 and 2018 mainly through its media agency, Al-Andalus, threatening countries engaged in counter-terrorism operations, but also threatened Western companies, particularly French, working in North Africa and Sahel countries that they were now "legitimate targets for the Mujahedeen". AQIM accused international companies active in the Sahel of stealing the local wealth and maintaining the status quo, contributing to the spreading of "poverty and unemployment".

In accordance with AQIM's threats, IHS Markit's intelligence events demonstrate a clear shift in target set for jihadist attacks across the Sahel, focusing less on soft targets such as hotels and similar venues frequented by expatriates, and more on national and international government assets and security forces. These are predominately French counter-terrorism Operation Barkhane and United Nations bases.

Outlook and implications
JNIM is likely to continue focusing its attacks on government and security forces -national and international - in and around Sahel urban areas in the six-month outlook, with the objective of testing the response and identifying new vulnerabilities. These are likely to include both simpler guerrilla tactics preferred by AQIM's local affiliates, such as shooting ambushes and roadside improvised explosive devices (IEDs) targeting security forces' convoys, as well as more complex attacks targeting government and military bases, potentially through infiltration, not only in capitals, but also less well-defended cities. The G5 Sahel headquarters in Mauritania and operational outposts are likely to present particularly attractive targets, given reports of financial constraints giving rise to insufficient manpower and resources.

Mali is likely to remain JNIM's organizational base mainly due to the continued absence of state control in the country's north, which hinders progress on implementing a peace agreement between the government, ethnic factions, and armed groups.

Meanwhile, the proximity of military bases to airports entails elevated shoot-down risks for military and UN civilian aircraft, as was the case in a 14 April 2018 attack in Timbuktu. Similarly, there is a high risk of collateral, if not targeted, damage to parked aircraft.