My clients often ask the question, "What brands are Saab owners moving into, now that the company is bankrupt?" I decided to do a quick study but before the findings are revealed, I'll provide some brief background information about the brand's development in the U.S.

Saab, the Swedish vehicle company who claimed its cars were "born from jets." 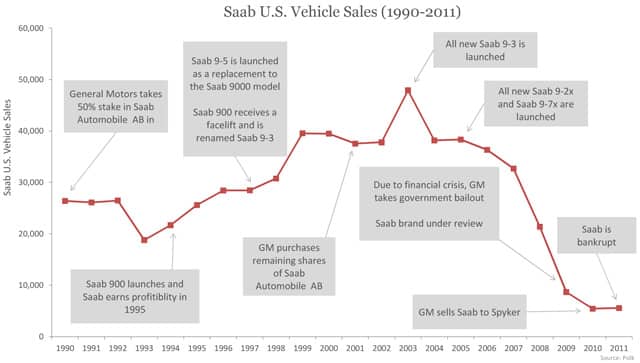 In 1989, General Motors decided to take a 50% stake in the Swedish company to help propel sales in the U.S. market. Throughout the '90s, Saab enjoyed new product launches (9-5, 9-3) and even celebrated its 50th birthday as a vehicle brand. Meanwhile, General Motors continued to invest in the Saab Motor Company in the early 2000s. As you know, the early 2000s were stable years for the U.S. economy. There was a housing boom and consumers had little difficulty receiving financial loans. The automotive industry was healthy as well.

The height of Saab sales in the U.S. was achieved in 2003 just after the launch of the 2nd generation Saab 9-3. During this year, Saab sold just fewer than 50,000 units. The plan was for GM to continue launching new Saab models to boost sales. Saab launched the all-new 9-7x in 2005 with the thought that the new SUV would service the demand and get more people talking about Saab. As you may remember, the 9-7x was an epic failure since it did not resonate well with consumers. In 2008 when the GM business was in a state of emergency, Saab was offered for sale. Finally in 2010, the brand was sold, and in 2011, it was bankrupt

So now back to the original question, what brands are Saab owners migrating into, now that the company is bankrupt?

To answer this question, I used Polk Disposal Loyalty Methodology. This methodology measures actual vehicle replacement within household garages. The basic premise is that every time a new vehicle is added to a household garage, Polk looks for the disposal of an existing vehicle in the garage occurring within six months of the new vehicle acquisition.

Given the inventory constraints faced by the Japanese automakers in 2011, I decided to focus on Saab disposals occurring over the two-year span of 2010-2011. The chart below outlines the top 15 brands that owners moved into after disposing of their Saab vehicle.

Honda and Volkswagen are the top two brands that Saab owners defect to. Consumers seeking luxury, look to the Audi brand first. The Chevrolet, Cadillac, and Buick brands are included in the top 15. These three brands capture 15.2% of all Saab defections, which means some Saab owners continue to stay loyal to General Motors.

As of April 2012, there are nearly 500,000 Saab vehicles in operation in the U.S. - who will seize the opportunity to capture these owners?