As the Russia-Ukraine conflict continues to rage, global energy markets are witnessing unprecedented volatilities, with the power and renewables sector being no exception. On the back of already tight global fuel markets from last year, the conflict has pushed spot coal and gas prices to record highs, making wholesale power prices skyrocket around the world.

Coal and gas markets are expected to remain tight in the near term, continuing to pressure power prices. While the situation is especially prominent in Europe given its dependence on Russian fuel imports, the impacts are being felt globally—albeit to varying extents depending on regional exposure to spot fuel markets. Asia, for instance, is less reliant on spot LNG purchases, with a large part of the region's LNG supply on long-term contracts.

As Europe looks to cut its dependence on Russian fuel imports, the region is seeking alternative fossil fuel supplies and is willing to pay a premium, putting further pressure on prices. In response, fuel suppliers are starting to divert supplies from growth markets such as Asia to Europe.

With coal prices rising, South and Southeast Asian markets are avoiding coal imports as prices remain beyond their reach with many expected to curtail power production. A few markets with abundant domestic coal resources, such as Indonesia, China, and India, could boost domestic production.

On the other hand, high and volatile coal and gas prices are serving as catalyst for more investment in alternative energy, discussed below. 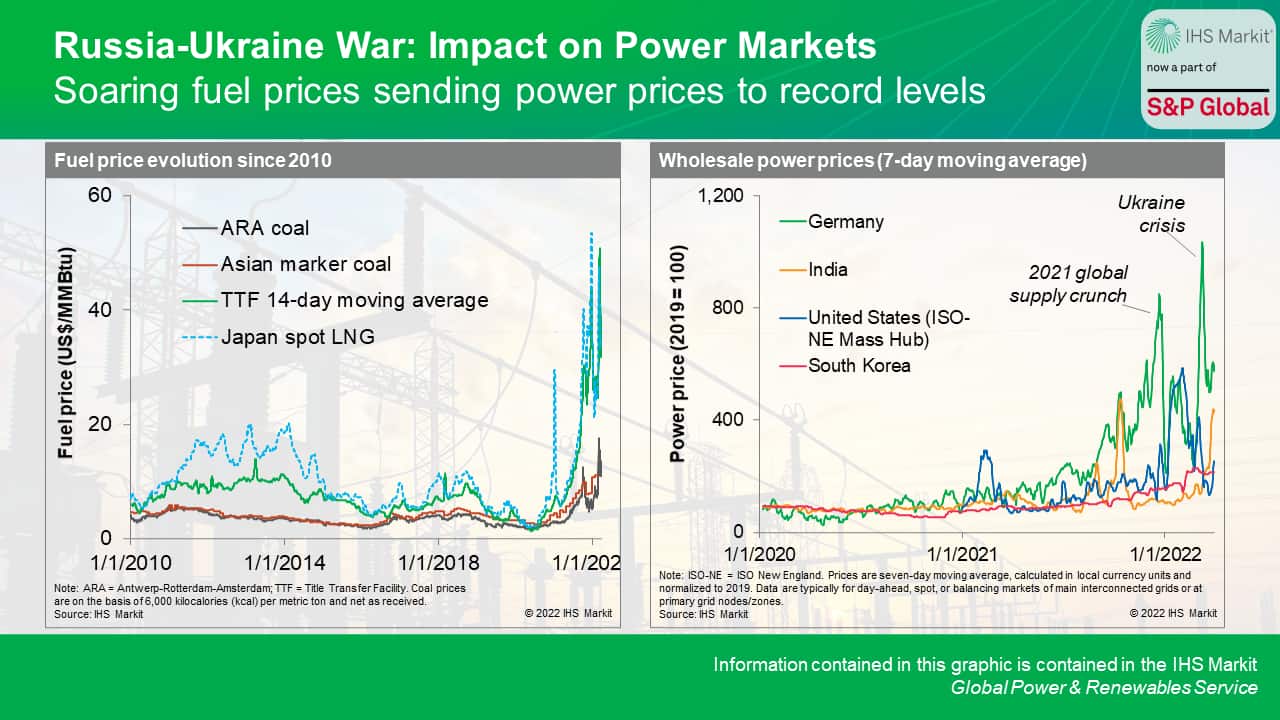 Risk of power supply disruptions on the rise

High coal and gas prices are likely to further complicate global power supply reliability, which has already been under heightened stress recently.

In particular, power supply disruption risks are expected to be higher in markets such as South and Southeast Asia where affordability is a concern. In markets with a regulated tariff structure, like India and South Korea, the financial condition of utilities and distribution companies could also come under strain since they are unlikely to pass through soaring fuel costs to consumers, further challenging the system and increasing the risk of load shedding.

In China, the situation is less serious compared with last year given lower power demand growth expectations as a result of recent Covid-19 lockdowns, although the risk of power disruption remains, especially if demand picks up later and weak hydropower conditions in the south return.

In some Latin American markets, such as Brazil, strong rainfall is easing the region's exposure to global gas prices.

Meanwhile, in Europe, the concern currently is less about power supply disruptions and more about affordability, with European governments starting to intervene with measures to reduce the impact of high energy prices on consumers.

The Ukraine crisis has brought energy security to the fore, in addition to putting renewed focus on cybersecurity.

In Europe, cutting reliance on gas in the short term will likely entail bringing back or delaying closures of coal or nuclear capacity, although the region also relies on uranium sourced from Russia.

Surging LNG prices could also lead to higher coal generation in Asian markets, depending on international coal prices and production in domestic coal markets. In Southeast Asia, reverting to coal is not difficult—given the region's relatively young coal fleet—and could also mitigate cost concerns for countries with domestic coal resources like Indonesia.

In OECD Asian markets, such as Japan and South Korea, governments are also focused on increasing nuclear power. For example, South Korea's newly elected president Yoon Suk-yeol has said he would rescind the previous administration's policy of phasing out nuclear power and instead make the country a nuclear energy leader.

While in the short term, some markets may revert to coal generation to ensure supply reliability, in the medium to long term, there will likely be a push to accelerate the energy transition and eventually wean off fossil fuel dependence—although the pace of transition will likely be different in different regions. An accelerated energy transition could also mean lower cumulative carbon emissions, even if emissions increase or stall in the short term.

Accelerating the clean energy transition, however, highlights other challenges that will need to be addressed. One important challenge relates to infrastructure.

In Europe, local opposition to the development of renewables and associated infrastructure remains a significant barrier to the region's renewable ambition.

In the United States, hundreds of gigawatts of renewables capacity are held up in interconnection queue backlogs, increasing costs and throttling the rate of additions.

Supply chains for clean energy constitute another challenge. Already, wind and solar capital costs have increased during the past year, a reversal of more than a decade of rapid declines - although the scale of the increase pales in comparison to skyrocketing coal and gas prices.

As power systems decarbonize, new flexible and carbon-free firm technologies—some of which are still expensive today and not yet commercially available to be deployed at scale—will also be critical to ensure grid reliability, especially as climate change brings on more extreme and unpredictable weather. These challenges are explained in more depth in this previous article.

Learn more about our global power and renewable energy research.