On 9 October, an identified gunman entered the Jarra bar in the centre of Playa del Carmen, killing a man and injuring another. The bar was subsequently ordered to close by municipal authorities. The killing was the latest violent incident to affect Quintana Roo's tourism and hospitality sector, the mainstay of the state's economy. More than a third of Mexico's international tourism is concentrated in Quintana Roo. The state received 16 million tourists in 2016. The bulk of Quintana Roo's tourism industry is concentrated in Cancún located in the municipality of Benito Juárez, and Playa del Carmen located in La Solidaridad.

Quintana Roo has been largely exempt from the increase in organised crime-related violence evident in Mexico since 2006. However, criminal cells associated with Los Zetas and the Gulf Cartel (Cartel del Golfo, or CDG), principally, have been involved in the drugs retail market in evening touristic hotspots in Cancún and Playa del Carmen, and the establishment of protection rackets (extortion demands) over nightclubs and bars for at least a decade. Recently, the actor set has been expanded to include the Cartel de Jalisco Nueva Generación (CJNG), which has aggressively pushed into the area. 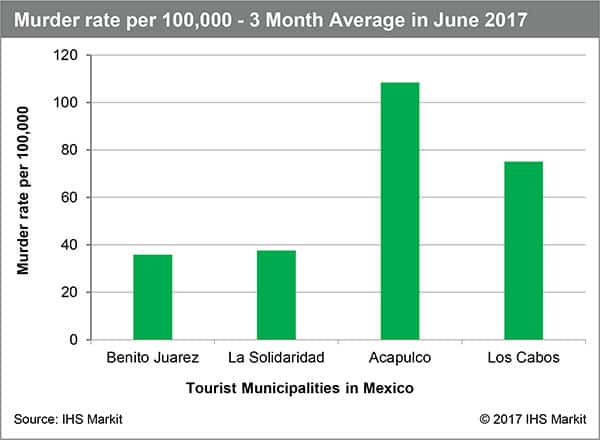 The amount of extortion cases officially reported in Quintana Roo are relatively low - 49 cases between January and August 2017 out of 3,925 nationwide, and only 41 cases in 2016. However, many more incidents are likely to go unreported; IHS Markit sources suggest the practice is common across the hospitality sector, particularly affecting small and medium-sized independent establishments and taxi companies.

Over the course of 2017, inter-criminal group violence has grown more visible, directly affecting touristic establishments. On 16 January, five people were killed in an attack on the Blue Parrot nightclub in the centre of Playa del Carmen. On 2 July, a bar next door to the Blue Parrot was attacked by a group of gunmen, resulting in two deaths.

Moreover, violence has been applied directly and openly against state personnel and institutions. In January 2017, the Cancún office of Quintana Roo's state attorney's office was attacked by a group of gunmen, which detonated explosive devices, killing two agents and provoking a firefight that lasted 40 minutes and extended into surrounding residential areas. On 16 September, a police commander from Playa del Carmen, also of Quintana Roo's state attorney's office, was gunned down and killed in a Cancún shopping mall; so were his wife, an agent for the same institution, and his child. According to IHS Markit sources from Playa del Carmen, the commander had been accused by the CJNG of colluding with and protecting the interests of Los Zetas and the CDG. Both are the CJNG's main competitors for the local extortion and drugs retail markets. The incident underlined competition between rival cartels for the local extortion and drug market.

Although indices of violence are increasing in Quintana Roo's primary tourist destinations, they remain far below those seen in Mexico's other tourist hotspots of Acapulco and Los Cabos. Nevertheless, the growing number of violent incidents involving the hospitality sector - either through armed robberies or acts of violence to enforce extortion demands - increases the risk of collateral death and injury for patrons of Quintana Roo's bars, restaurants, and nightclubs, even if tourists are not targeted specifically. In Cancún, the violence has been concentrated in the downtown areas away from the main hotel zone. However, in Playa del Carmen, IHS Markit sources claim a hotspot for violence and extortion is Quinta Avenue, which runs alongside Playa del Carmen's beach and where tourism-oriented businesses are concentrated. Indicators of death and injury risks for tourists rising further would include the seizure of explosives from criminal groups to be-used in extortion enforcement and retribution. The publication of narco-messages by one cartel threatening another is also likely as a prelude to increased inter-cartel violence.