In May and early June, there were clear indications of a sharp rebound in economic activity, after a very deep and very short recession. One measure is the steady rise in our Materials Price Index since the beginning of May. Another is the robust increase in the JP Morgan Global Composite Output Index (compiled by IHS Markit) from a record low of 26.2 in April to 36.3 in May and 47.7 in June. Other, higher frequency data (such as Google mobility reports, OpenTable seated diners, and daily credit card usage) confirm the early resurgence in activity.

We have upwardly revised our forecast for global growth in 2020 slightly. World real GDP is now expected to contract 5.5% this year, followed by a 4.4% recovery in 2021. Nevertheless, the logic underlying our forecast, of a "bounce and fade," has not changed. Consumers and businesses remain cautious. Unless fiscal and monetary authorities provide more stimulus, a key support for the recovery will disappear soon. Most troubling of all, the recent rise in COVID-19 virus infection rates in large countries (including the United States, India, and Brazil) underlines the fragility of the rebound and the risk of a W-shaped cycle. 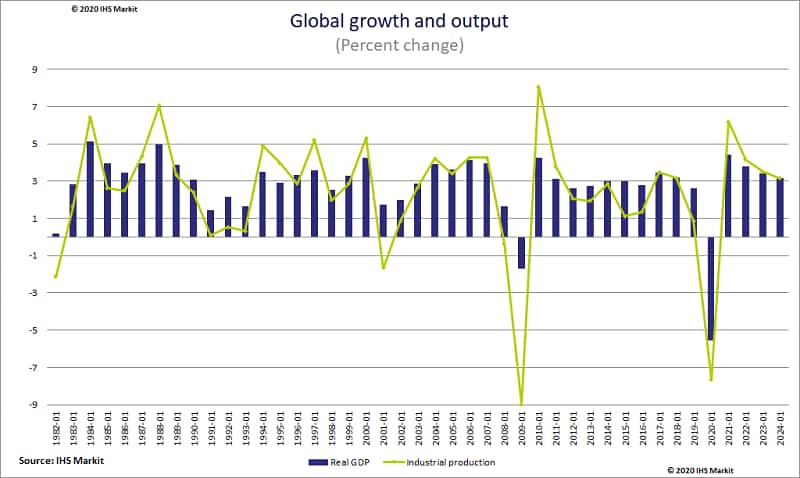 In the United States, "social-distancing fatigue" led some large states (Arizona, California, Florida, and Texas) to open up rapidly, leading to a surge in infections. Other states (notably in the Northeast) have opened up more slowly, with the spread of the virus limited. The hardest-hit states have begun to reimpose selective bans on people going to bars, restaurants, and theaters. Similar partial lockdowns have been put in place in other virus hotspots around the world, including Australia, mainland China, Germany, Israel, Japan, and Spain. Predictably, high-frequency data on consumer spending patterns have "rolled over", signaling a renewed increase in consumer caution.

The new wave of infections has reduced the probability of a V-shaped cycle, something to which we did not subscribe, and increased the risk of a double-dip recession (W-shaped cycle). We currently assign a probability of around 20% to such a scenario. Depending on the pattern of infections, this risk could rise in the coming months. The likely timing of a second downturn would be late this year or early 2021, and the economic contraction would probably not be anywhere near as severe as the recession we just went through. Virus management has improved, and widespread lockdowns will probably not be necessary.

Bottom line: While the worst is probably behind us, the global recovery remains weak and subject to further downside risks.