The Cannabis sector has delivered uneven returns, with positive developments in some areas being offset by challenges elsewhere. It seems fair to say that to this point the sector has rewarded those who invested early, however it has generally frustrated efforts by investors to get involved more recently. With significant volatility in share prices, there is more to the returns of the sector for investors, namely the revenues from lending shares to short sellers.

One of the best examples is Tilray, which has been one of the highest revenue generating US equities since its IPO in July 2018. Since going public, shares of TLRY have generated $148m in revenue, contributing 2.9% of all North American equity lending revenue. That's impressive considering that the returns were generated on 0.04% of NA equity loan balances. From the perspective of an investor who purchased shares on the first day of public trading, the share price as of January 27th reflects a decline of just over $11. Making reasonable assumptions around fee split and utilization, that investor could have earned $36 in lending revenue. The price of the security, and its value to investors, is therefore fundamentally altered by the consideration of lending revenues. Similarly, while shorting TLRY from the peak valuation has been a fruitful venture for short sellers, their profit has been meaningfully impacted by the borrow cost paid. Tilray is an extreme example, reflecting as much the dynamics of lending fees for low-float IPOs as the Cannabis industry, but it is instructive for thinking about the lending fee and borrow cost as critical inputs to the investment process.

Canopy Growth, one of the market leaders in the sector, has seen consistent demand from short sellers in the years since going public. 2019 was exceptional, however, in the scale of borrow balances and related revenues, totalling $153m in revenue, or just over 4% of NA equity total. YTD revenues of just over $23m equate to 8.7% of NA equity revenues, suggesting this year could deliver an even higher total. While the fees are unlikely to ever reach the eye-popping levels observed for TLRY shares in the period between the IPO and lockup expiry in January 2019, an early investor in Canopy Growth could have fully recouped their investment in the firm via lending fees by this point.

UK based GW Pharmaceuticals, which trades via GWPH ADR in the US on the NASDAQ, is certainly a firm apart from those whose business is related to Cannabis, with its focus on cannabinoid related medicines. It too has been a target for short sellers, however, and short interest in the stock has reached a new all-time high in terms of shares and market valuation in 2020. An abundance of GWPH shares available for borrow has kept a lid on lending fees to this point, though it's worth noting the utilization of the shares in lending programs has increased from a low point of 25% in August 2019 to just over 40% at present. A further increase in borrow demand could start to push up on fees going forward. 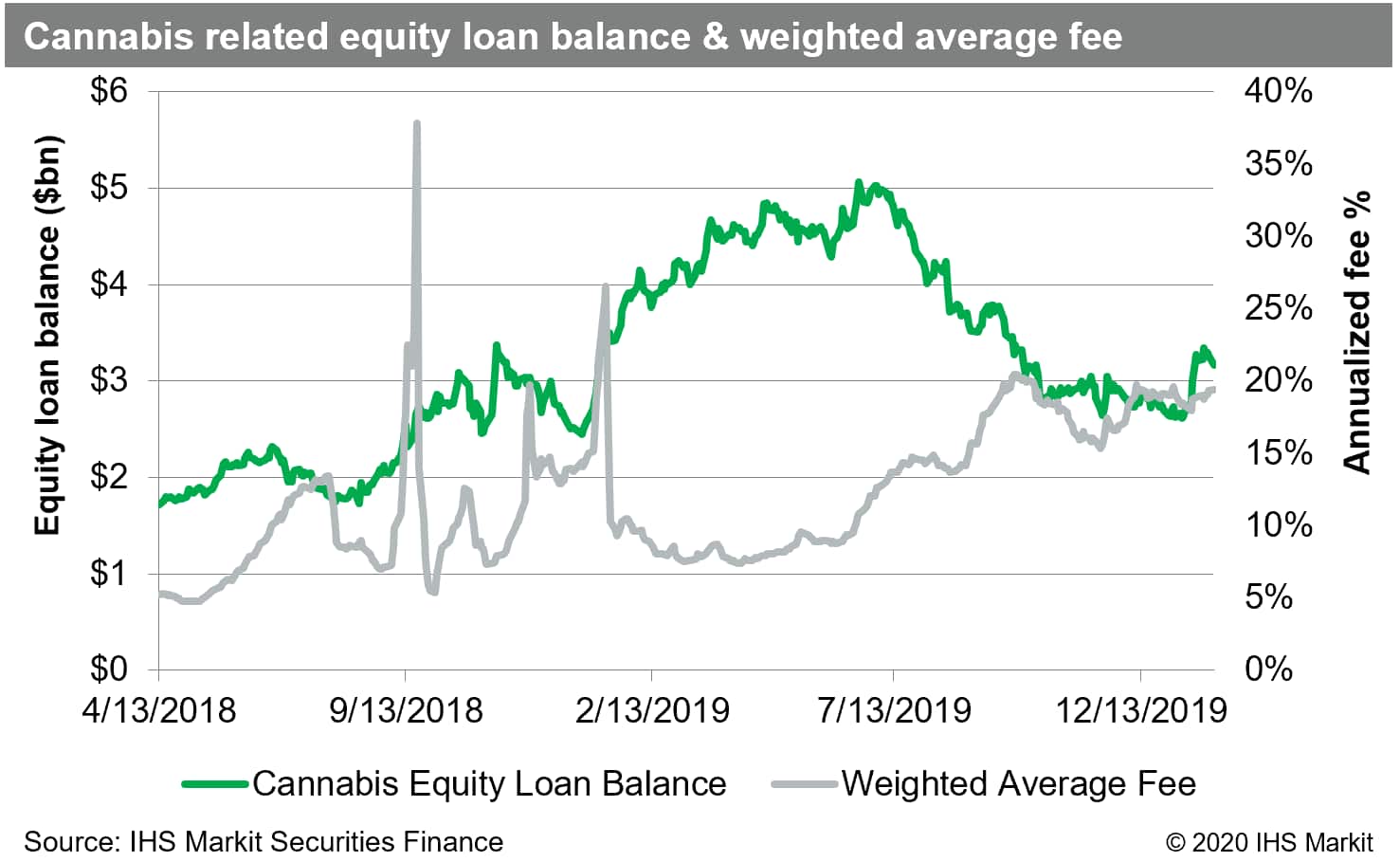 The combined market cap for Cannabis related equities peaked in October of 2018 at nearly $70bn, however that's a bit misleading given that it was only for one day and Tilray represented $15bn of the total. Excluding Tilray, the combined market cap peaked just below $61bn in April 2019, on the eve of Canadian legalization in June. Loan balances for Cannabis related equities peaked in the weeks after CA legalization at just over $5bn.

Taken together Cannabis related equities contributed 13.6% of all North American equity lending revenue in 2019, totalling more $484m; That's up from $355m in 2018, which was 12.3% of the total. Through January 27th the revenue contribution is 15.3%, with Cannabis related equities on pace to have the greatest influence on record. The increase in market valuations for Cannabis related equities, from the low point in Q4, may reflect a starting point for a broader recovery or a lower risk entry point for short positions, in either case, a consideration of lending fees and borrow costs are critical for all investors.