Resource curse and the potential impact of COVID-19: the case of Russia

Russia has undergone a significant economic transition since the collapse of the Soviet Union, moving from a centrally planned economy model towards a more market-based economic system. The state of transition can be judged as partial with the pace of reforms having significantly stalled in recent years.

The Russian economic model is characterized by a significant role of oligarchs, high concentration of wealth and high internal inequalities, privatization of most industries with exception of several strategic sectors including transportation, energy, banking, and defense-related sectors. The State remains an active player directly or indirectly affecting or controlling the key sectors and interfering with private property.

The Russian Federation is one of the world's leading producers of crude oil and natural gas and a top exporter of metals such as steel and primary aluminum. It is considered a bookcase example of a resource course-stricken economy. The Russian economy is profoundly dependent on the movement of world prices of these commodities and in particular of crude oil. This exposure is a major weakness of the state.

The Russian Federation has been a member of WTO since 22 August 2012. Following military intervention and the annexation of Crimea (February 2014), international sanctions were imposed on Russia. The sanctions were levied by the EU, the US and some other countries and international organizations. The Russian Federation responded with sanctions against other states e.g. a total ban on imports of food from the US, the EU, Norway, Canada, and Australia. The sanctions are still in effect. In December 2019, the EU extended them until 31 July 2020.

The sanctions contributed to the exchange crises of the Russian ruble and the Russian financial crisis. They also stifled economic growth with some estimates putting it at 0.5-1.5% of foregone GDP growth yearly.

Russian economic growth in recent years has been sluggish. A combination of falling oil prices, international sanctions, and structural limitations pushed Russia into a deep recession in 2015, with GDP falling by 2.8%. The downturn continued through 2016, with GDP contracting another 0.2%, but was reversed temporarily in 2017 as world demand picked up. After growing by 2.3% in 2018, the economy slowed in 2019. The slowdown was explained by declining energy exports and the impact of rising inflation on household consumption. Government support for import substitution increased to diversify the economy away from extractive industries. A large-scale public investment plan for the period 2019-24 was supposed to revive the economy in 2020. The current global situation may obliterate these ambitious plans. 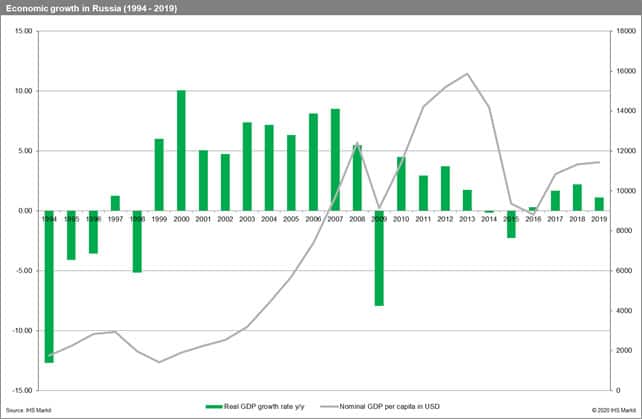 Trade of the Russian Federation

Exports of manufacturing commodities from Russia amounted to USD 231.8 billion in 2018 and estimated at USD 233.6 billion in 2019 according to the IHS Markit GTA Forecasting database. In terms of trade volumes, these were equal to respectively 125.9 and 125.3 million metric tons.

In 2019, 29.6% of the real value of Russian exports was due to crude oil. Refined petroleum products contributed 18.3%. They were followed by goods not classified by kind (7.1%), natural gas, petroleum gases and gaseous hydrocarbons (4.3%), coal and coke (4.3%) and basic iron and steel (2.6%). Dependency on extractive sectors, mining and basic heavy industry is clear. 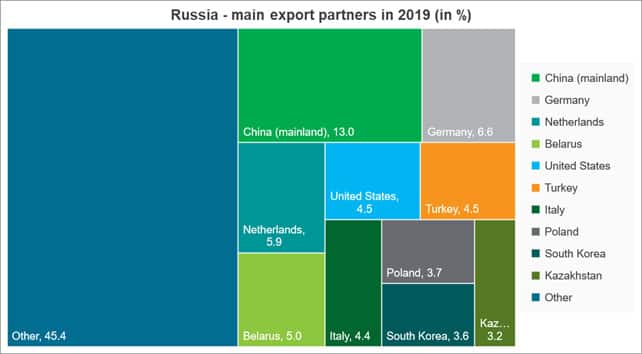 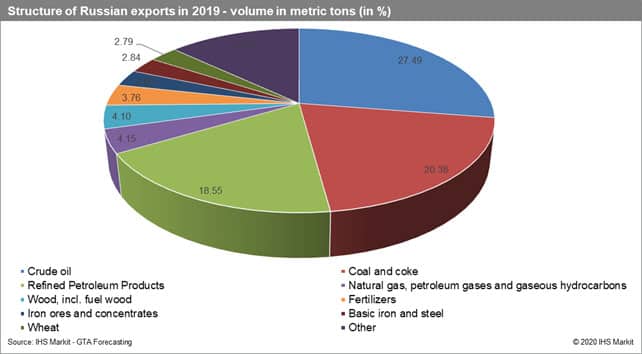 Russia suffers from a permanent trade deficit with imports significantly exceeding exports both in terms of real value (the deficit in 2019 exceeded USD 233 billion) and volume.

Imports of manufacturing commodities to Russia amounted to USD 460.2 billion in 2018 and USD 467.4 billion in 2019 according to the IHS Markit GTA Forecasting database. In terms of trade volumes, these were equal to respectively 950.3 and 960.6 million metric tons. 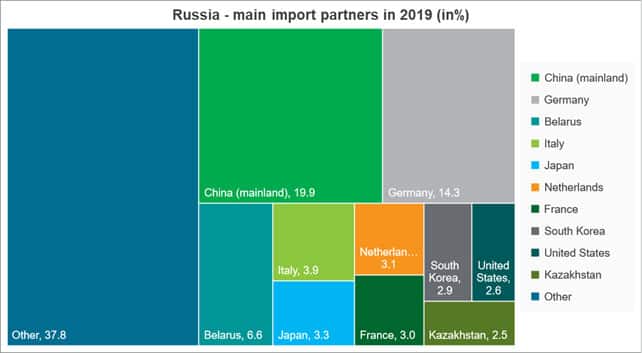 The natural resource curse is a phenomenon in which countries rich in oil or other natural resources fail to grow faster than countries lacking access to these resources. It is extremely difficult to be avoided. The availability of natural deposits shifts investments from the dynamic industry sectors to rather a static extractive industry sectors (manufacturing crowding out). A short-run increase in income is quite frequently misallocated towards higher temporary consumption in general or/and quite often the wealth associated is taken over by the ruling elites. Institutional quality seems to play an important role with misallocations larger in institutionally weaker states. Countries stricken by the natural resource curse become increasingly dependent on and exposed to world commodity prices and volatility in the markets.

The high reliance of Russia on commodity exports makes the Federation extremely vulnerable to boom and bust cycles from the volatile oil market. During the 1999-08 period as oil prices rose rapidly globally, the Russian economy had impressive growth rates (exceeding 7% on average). The global financial crises showed the limits of the oil-based growth model. The growth collapsed in 2009 and then remained significantly lower steadily declining (with contractions in 2014-15).

The share of crude oil, refined petroleum products, and natural gases in Russian exports in real terms reached its maximum in 2010 - it was close to 65%. The share is decreasing but still significant (it still exceeded 50% in 2019). The Russian economy is slowly diversifying but has not been able to escape the curse. The production of crude oil in Russia in recent months was stable and exceeded 50 million kiloliters a month. 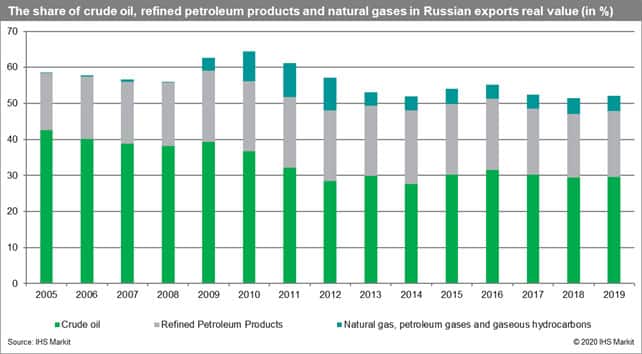 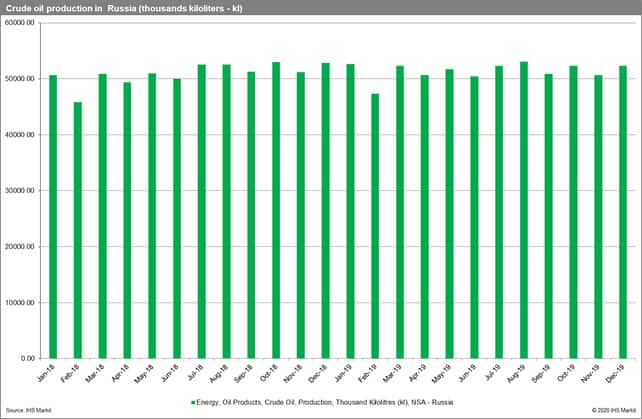 The evolution of oil market prices is highly unfavorable to Russia. In the last year, the average crude price reached its maximum in April 2019. It shows a declining trend in general. During the last three months, it reached a maximum during the escalation of the US - Iran crisis in the first weeks of January. The outbreak of COVID-19 in China, the major black swan in recent years, drastically changed the situation. Markets hate uncertainty and react even worse to fear. The outbreak limited to China has now become a global pandemic. According to WHO on 16 March 2020, there were 167,511 confirmed cases globally and 6,606 deaths affecting 151 countries. The worse affected are China, Italy, Iran, South Korea, Spain, France, and Germany. Europe has now become a center of the pandemic and the number of confirmed cases is higher outside of mainland China than in China itself. The number of cases in the Russian Federation was equal to 69 at this stage with the outbreak just beginning to gain pace and stricter measures slowly being introduced.

The impact of the outbreak on the global economy will be drastic. The oil markets collapsed in line with falling production, outages, and decreased demand and trade flows. Furthermore, Russia and Saudi Arabia failed to agree on further production cuts providing incentives to further falls. The supply is currently higher than demand - the price can thus fall below USD30/bbl. IHS Markit reports the drop in first-quarter oil demand globally to be the biggest ever recorded—down 3.9 MMb/d compared with 2019. If uncertainty lasts, there is no chance of a reversal in market sentiments. It could last a quarter or more. Coordinated actions at the global level will have to be taken to rescue the world economy in 2020 involving governments, central banks, and international institutions. The situation of Russia similarly to other resource-curse states will be particularly difficult. In addition, the impact of the outbreak on the real side of the Russian economy is at this stage unknown it will be related to the scope and size of the outbreak on Russian territory. In general, we can assume that the adverse impact could be larger in countries with weaker institutional setups. Thus, the exposure of Russia could be even higher. 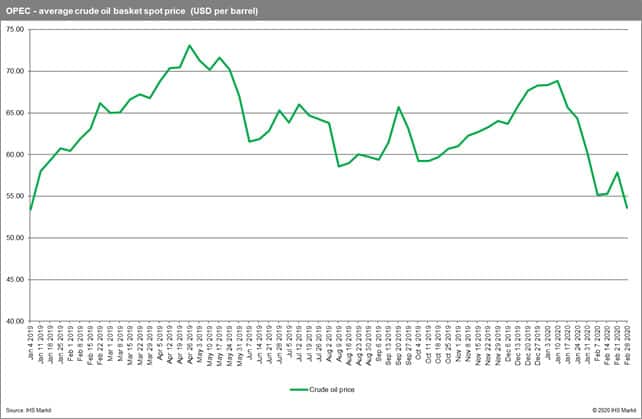 The growth rates in exports (real value) were equal to 2.16% in 2018 and estimated at 0.74% in 2019 according to the GTA Forecasting database. Russian imports increased by 3.86% and 1.56% respectively. The newest forecasts from IHS Markit for Russia (February release) point to an increase of 2.58% in 2020 and 1.58% in 2021 and 1.38% and 1.26% for the real value of Russian imports. They do not take into account for the time being the impact of the outbreak of COVID-19 on the global economy as well as problems in negotiations with OPEC.

The monthly data from Global Trade Atlas show a collapse in Russian exports from May 2019 onwards, with an increase in imports. That could be partially explained by the exchange rate movements with ruble appreciating towards USD and EUR. Appreciation, in general, stifles exports and leads to increases in imports.

The evolution of trade and economic growth is in line with the evolution of PMI indices for manufacturing production and new export orders. The readout was drastic in January with both indices below 40.0 points but recovered in February 2020 (both above of 50.0). The value is likely to change below 50.0 in March as firms will incorporate the inflow of information on the outbreak in their forward-looking decisions. The prospects are adverse.

The IHS Markit interim forecasts from 9 March 2020 by the Global Link Model team still pointed to positive GDP growth for Russia in 2020 but equal only to 0.8% and 1.7% in 2021. The prior forecast from 26 November 2019 was equal to 1.63% for 2020 thus it was cut by half. The likelihood of further adjustments in the forthcoming weeks is highly likely. 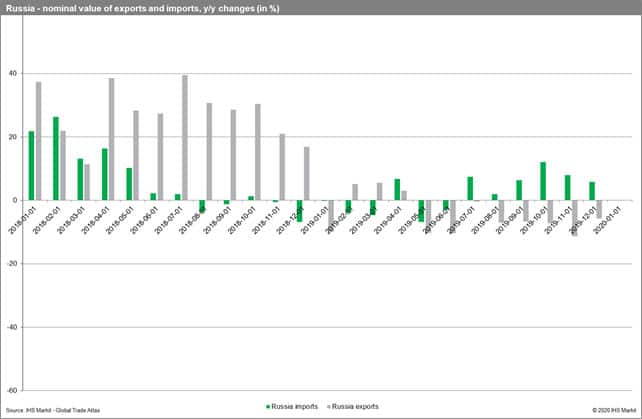 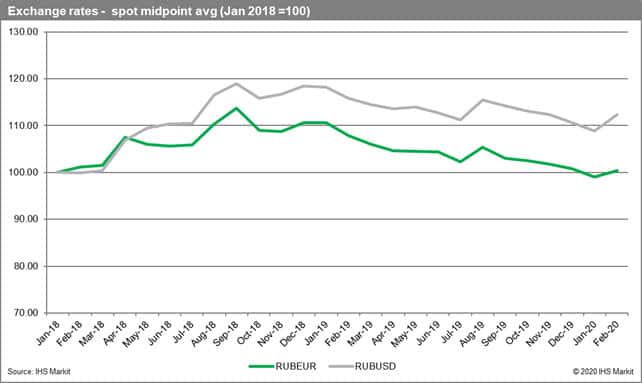 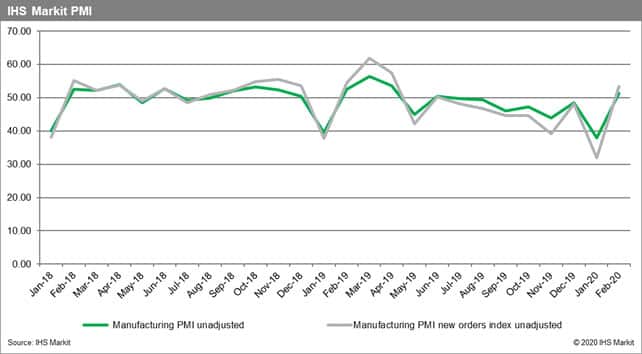 This column is based on data from GTA Forecasting and Global Trade Atlas as well as other resources available from IHS Markit.