At IHS Markit, we have gone through the annual exercise of ranking solar phovoltaic EPC providers in the previous year, noting a new wave of consolidation and some reshuffling among the market leaders. In 2019 the 30 largest EPC providers installed 28 GW of non-residential PV, representing 26% of the total market. This increase from 21% in 2018 stems mainly from a growing concentration in the Chinese PV market, as well as integrator concentration in rapidly growing markets like Spain and Vietnam. Large project sizes also contributed to greater market shares among the largest companies. More than 140 PV parks larger than 100 MW in size were completed in 2019, representing 30% of the global PV market (excluding residential systems). In 2018, parks above 100 MW counted for less than a quarter of non-residential PV addition

From our analysis, in 2019, PowerChina installed 2.5 GW of PV to sail to the top of the ranking, from a fourth position in 2018. This was possible through one gigawatt installed in China, another gigawatt in Vietnam, and several projects in Latin America. At second position, we find inverter supplier, Sungrow, which took a 6% share of the Chinese market as it continued to grow its EPC business. Following PowerChina and Sungrow, we have Prodiel and Sterling and Wilson, thanks to their leading regional positions in Latin America and Africa and the Middle East, respectively. These four EPC providers installed 8 GW of PV combined in 2019, each taking a 2% share of the global EPC market.

In the three largest non-residential PV markets - China, the United States and India - we observe that local companies dominated the EPC rankings also in 2019. An 11% year-on-year decline in PV additions in China contributed to a consolidation among EPC providers in this traditionally fragmented market. Of the 29 GW of non-residential PV plants added in 2019, the largest EPCs - Sungrow, PowerChina and TBEA Xinjiang Sun Oasis - installed 13%, up from 9% in 2018. As we project China to add more PV in 2020 than in 2019, these providers' market shares are likely to be diluted again. In the United States, the five largest EPCs installed 27% or new non-residential PV capacity in 2019. At 10% market share, Swinerton Renewable Energy, maintained its position as the preferred EPC contractor in the country. First Solar and Cypress Creek Renewables, both among the top five companies in 2019, have both stated that they will exit the EPC segment. This creates opportunities for established, local EPCs, as well as for the emerging group of international companies that are eyeing the growing US PV market. In the highly price sensitive Indian PV market, the top 5 integrators installed 37% of the PV plants in 2019. The local EPC/developer Azure Power, which is owned by foreign investors, took the lead in the country. As India's PV market risks being cut in half in 2020, as a result of COVID-19, further consolidation among the main EPCs is probable. Of these three major markets in 2019, only the United States is likely to see an increasing participation of international EPCs, as margins are more attractive.

Outside the three largest PV markets, we observe a mix of international and local EPC providers in the top positions. Australia has shown difficult to operate in, illustrated by the fall of local EPC, previous market leader, RCR Tomlinson two years ago. As many active third-party providers steer away from the PV segment in Australia, international developers increasingly perform in-house EPC using local contractors. A more fertile ground for third-party EPC providers developed in 2019 in Spain and Vietnam. Spanish EPCs dominated the country's 5 GW of installations in 2019, with the top five providers supplying a stunning 77% of the market. In Vietnam, the five largest EPCs supplied a third of the market. This market that grew from close to nothing to install 6 GW last year, attracted a mix of Chinese, Japanese, European and Indian EPC providers.

On the other end of the spectrum, Germany is a consistently local and fragmented PV market. The small system sizes, generally below 10 MW, contributes to a market where the ten largest EPCs do not exceed a fifth of the 3.5 GW market. Only one company, Enerparc, has succeeded in gaining significant market share, by installing 9% of Germany's non-residential PV systems in 2019. The company thrives on its success as a developer, including winning a large portion of Germany's PV tenders.

What market share trends do we see for 2020? In a normal year, by the fourth quarter we already have an idea of the global EPC rankings for the current year. We know if the large projects are being completed as planned. Some less transparent markets or companies may surprise us, but the general picture is usually rather clear. 2020 is as you know different. From the supply chain hick-ups in the first quarters, to lockdowns and safety measures, many projects have been delayed. Projects are still at risk of delays depending on the evolution of the pandemic. Additionally, the recent increase in module prices complicates procurement for EPCs that build projects with tight margins. Overall, we project close to 100 GW of non-residential PV systems to be added in 2020, down from 107 GW in 2019, which is more optimistic than we initially thought back in April. The question is how market shares will be distributed among the EPC providers. Who will meet deadlines, and who has renegotiated terms? As companies keep quiet, we eagerly await 2021 to dig into the details on projects completed in 2020. 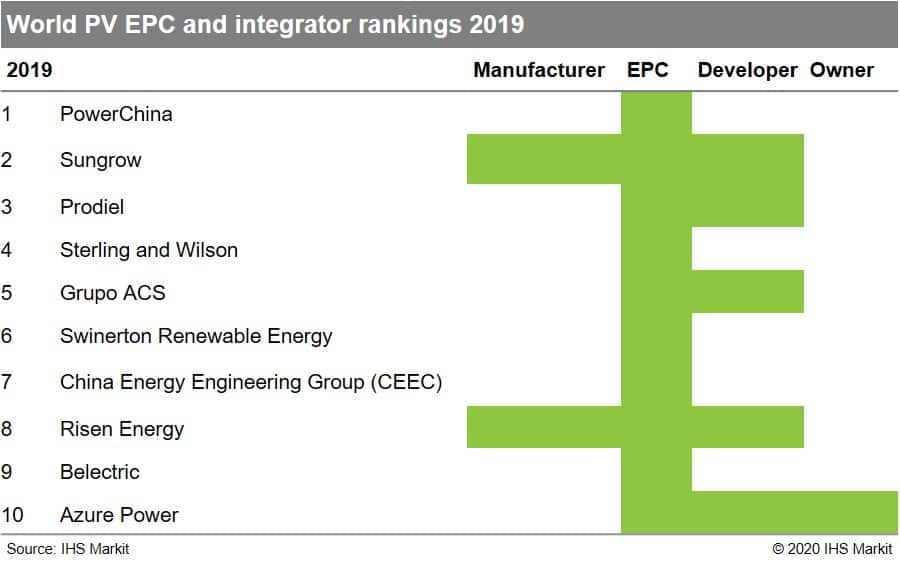 More details, including regional market shares, can be found in the Solar EPC and O&M Provider Tracker, which is published as part of the IHS Markit downstream PV intelligence capability in our Global Clean Energy Technology service.

Josefin Berg is a research and analysis manager for the Solar and Energy Storage research team, where she covers trends and company strategies in the downstream part of the PV market.