Two questions and three equations on distance of investigation

This is a collaborative article by Hamed Tabatabaie and Louis Mattar.

The distance of investigation concept is often used to answer two different types of questions:

Traditionally, these two questions have been answered using the same equation, namely, the radius of investigation equation. In this equation, t is in hours, and is derived from tDe = 0.25 :

This approach has worked well for many years. However, with the appearance of unconventional reservoir systems, which are dominated by linear flow, other distance of investigation equations are being used, and to further confuse the issue, the distance of investigation equations for constant flow rate and constant pressure conditions are different.

There are essentially three equations for distance of investigation in common use:

Our investigation into the two Questions, and the three Equations, has resulted in some clarifications, and some unexpected results. These are published in (Tabatabaie et al, 2017) and summarized in this article. The main findings of our research are: 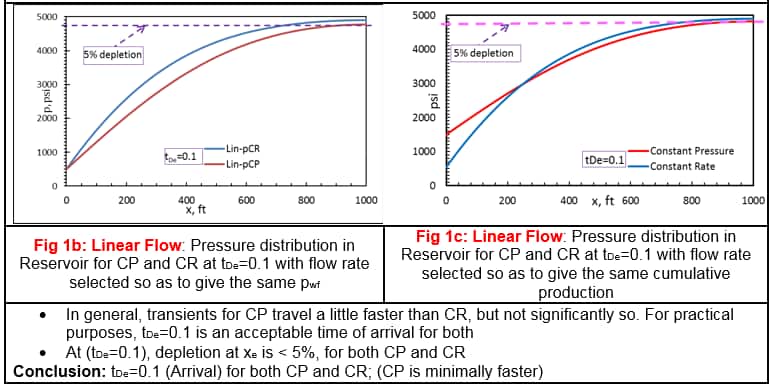 Figure 1b and 1c: Linear flow

Figure 2: Time of arrival of pressure disturbance at boundary

Discussion of Time of Arrival:

Continue to read this article... to preserve the equations, the remainder of our findings are best read in our full report.

Louis Mattar is a Principal Reservoir Advisor at IHS Markit.
Hamed Tabatabaie is a Product Management Principal at IHS Markit.
S. Hamed Tabatabaie is a Product Management Principal and has been involved in reservoir – simulation studies, reserve estimation and production data analysis of conventional and unconventional reservoirs. Hamed’s primary areas of interest include mathematical modeling and production data analysis to optimize hydrocarbon recovery. He earned his BSc and MSc degrees from the Petroleum University of Technology, Iran, and MEng and PhD degrees from the University of Calgary, all in petroleum engineering.

How has the COVID-19 pandemic impacted the #oilandgas #digitaltransformation movement? @DanielYergin previews some… https://t.co/Fz85zQll5P

RT @PetroleumEcon: “The partners have to manage production cuts to ensure that they will not harm the reservoir over the longer term,” says…

Despite coronavirus (COVID-19) and low #oil prices reducing activity, operators throughout Brazil who already have… https://t.co/zTiOmAU2YT

#Oilandgas companies are considering which wells to shut in & what their new production will look like for the fiel… https://t.co/Q70FYF48Q3