Japan's manufacturing woes persisted in the middle of the second quarter, according to flash PMI data, as intensifying trade war fears weighed on sentiment. The outlook for the sector grew gloomier, with business expectations turning pessimistic for the first time since late-2012. Other PMI indicators also provided scant hopes that manufacturing conditions will improve in coming months. 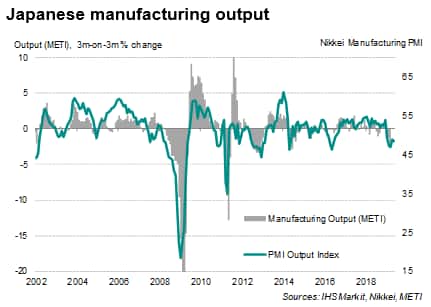 According to flash estimates, the Nikkei Japan Manufacturing PMI for May fell to 49.6 from 50.2 in April, signalling a deterioration of manufacturing conditions midway through the second quarter. The headline PMI, a composite indicator derived from various survey sub-indices, provides a quick snapshot of the health of the manufacturing economy.

Production cutbacks were reported for a fifth straight month during May as demand conditions continued to deteriorate. New export orders decreased further, marking five months of reduction. Firms responded to lower order book intakes by trimming input purchases as well as inventory holdings. Input buying fell for a fifth straight month, driving stock of purchases down at the fastest rate for a year.

Jobs growth also remained subdued as producers focused on curbing costs amid the downturn in sales.

Japan's manufacturing downturn largely reflected a weakening of global demand. Goods exports have been shrinking since December last year, according to official data, in line with the signals from the PMI data. The survey's new export orders index signalled a fall in overseas sales for a sixth consecutive month in May, with exports dropping at one of the steepest rates seen in the past three years. 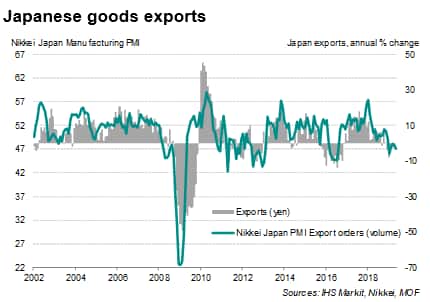 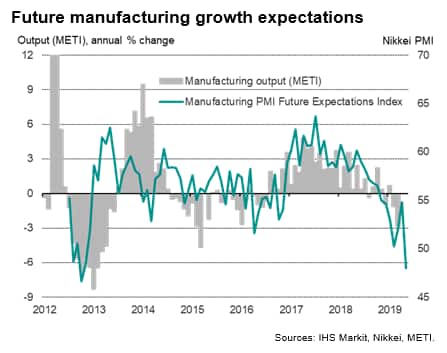 The re-escalation of trade tensions between the US and China, which together accounted for around 40% of Japan's exports in 2018, and the planned consumption tax hike in autumn have heightened concern among Japanese goods producers. Sentiment regarding future output turned pessimistic in May (meaning the number of pessimists exceeded optimists) for the first time since late- 2012.

While first quarter GDP came in better than expected, the flash manufacturing PMI data suggest that growth is set to weaken in the second quarter as Japanese manufacturers, particularly exporters, struggled with formidable challenges that show no signs of abating.

Click here to access our monthly #PMI overview, where we take a closer look at the Global PMI figures for June:… https://t.co/5UjIWNCx3G