Latest PMI data signalled that the recovery of Canada's manufacturing sector continued into October, but a second wave of coronavirus disease 2019 (COVID-19) cases will need to be controlled if growth is to be sustained over the rest of 2020.

Manufacturers recorded a robust expansion of production during October, according to IHS Markit PMI survey data, providing further signs of recovery for an industry that saw output fall sharply between March and June. October's rise in production was the largest since August 2018.

Customer demand rose, elevated by improving foreign market conditions, and brighter prospects for the industry were reflected in workforce numbers growing and expectations for the year ahead remaining upbeat. That said, price pressures put a strain on firms' profit margins, with cost burdens rising at the fastest pace in two years, and growth of new orders moderating during October.

A rise in output to an extent not seen for 26 months in October extended the current expansion of factory production to four months, as the sector continued to recover from the severe second quarter downturn linked to COVID-19.

While official data are only available through to August and showed that manufacturing output continued to fall year-on-year, the strong improvement in production signalled by the PMI survey suggests a return to growth in the final quarter of 2020. 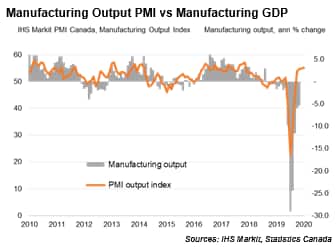 Although new orders rose at a robust pace amid returning client demand, the rate of increase eased from September's two-year high. Although Canadian cases of COVID-19 remain tamed compared to neighbouring countries, and anecdotal evidence suggested that customers were returning to more normal spending habits, case numbers have risen again and the dip in new orders growth hints at some resultant cooling of domestic demand. 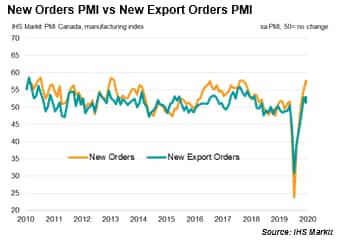 New export orders meanwhile rose during October, increasing at a faster rate than in September and above the long-run series average, suggesting foreign demand for Canadian goods was relatively sharp overall and is providing a boost to the factory sector. The latest expansion in new exports extended the period of growth to three months, which was the longest run of expansion since the end of 2018.

Growth of business activity across sub-sectors remained strong in October, signalling an encouragingly broad-based improvement. Investment goods producers (makers of capital equipment) reported the sharpest increase of the three. Production rose for the first time since July, with the rate of growth the fastest since August 2018, providing a welcome signal of improvement in investment spending.

While consumer and intermediate goods firms saw growth continue (the latter comprising makers of goods sold as inputs to other manufacturers), rates of expansion softened compared to September. 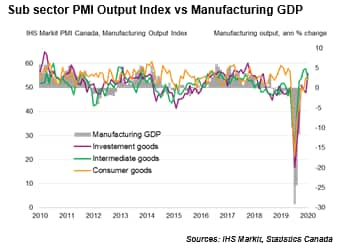 Growth in demand and emerging capacity pressures have meanwhile been good news for the manufacturing labour market. Workforce numbers have risen in every month since July, and look set to grow in the months ahead should demand conditions continue to improve.

However, the rate of job creation eased in October, with firms indicating that rising raw material price pressures weighed on the level of employment, deterring some firms from adding to existing staff costs.

Looking ahead, trends in staffing levels rest on the developments of COVID-19: if restrictions are tightened following a renewed rise in<span/> new cases, a second dip and another period of contraction in workforce numbers could be seen. 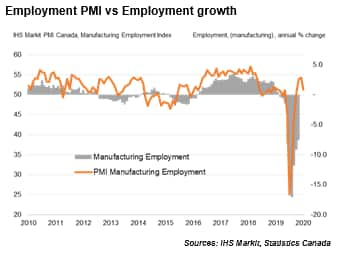 The rise in raw material prices were highlighted by the PMI survey showing input costs increasing at the sharpest pace in over two years during October. Material shortages and supplier surcharges were widely cited as having been factors pushing input prices higher. Firms also noted that the use of PPE equipment added to growing expenses.

Selling prices also increased, reflecting the need to pass on higher costs to customers, with average output charges rising solidly. That said, the latest increase in selling prices was much softer than the rise in input costs, suggesting firms only partially passed on cost burdens. Some firms mentioned lowering prices to remain competitive and secure higher sales, hinting at squeezed margins. 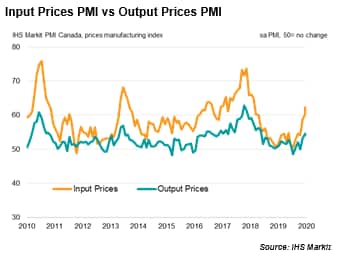 The latest PMI data for Canada points to a likely continuation of expansion at manufactures if current lockdown restrictions remain in place and the surge in cases are controlled.

Looking forward, IHS Markit forecasts growth of 3.9% in 2021 for the Canadian manufacturing sector, up markedly from the -5.7% contraction expected in 2020.

The next release of the Canada Manufacturing PMI is on Tuesday 1st December.