The renewed interest in the Bjornoyrenna Fault Complex (Figure 1), SW Barents Sea is marked by the two exploration wells, Snofonn North and Skavl Sto, that will be drilled by Equinor in PL 532 during late Q1 - Q2 2022. The exploration history in the SW Barents Sea involves more than 130 exploration wells drilled since 1980 which led to 37 discoveries. In 1980,7119/12-1 (Tromso sub-basin) and 7120/12-1 (Finnmark Platform) comprised the first wells drilled in the area. Both wells were dry with some oil shows having been encountered in 7119/12-1. The Hammerfest Basin followed by the Loppa High and the Bjornoyrenna Fault Complex comprise the areas that have mostly been explored. As expected, more concentrated exploration led to more discoveries in these basins. However, although between the Loppa High and the Bjornoyrenna Fault Complex the least number of wells were drilled in the latter area, these drilling attempts led to more discoveries ranking it in second place. 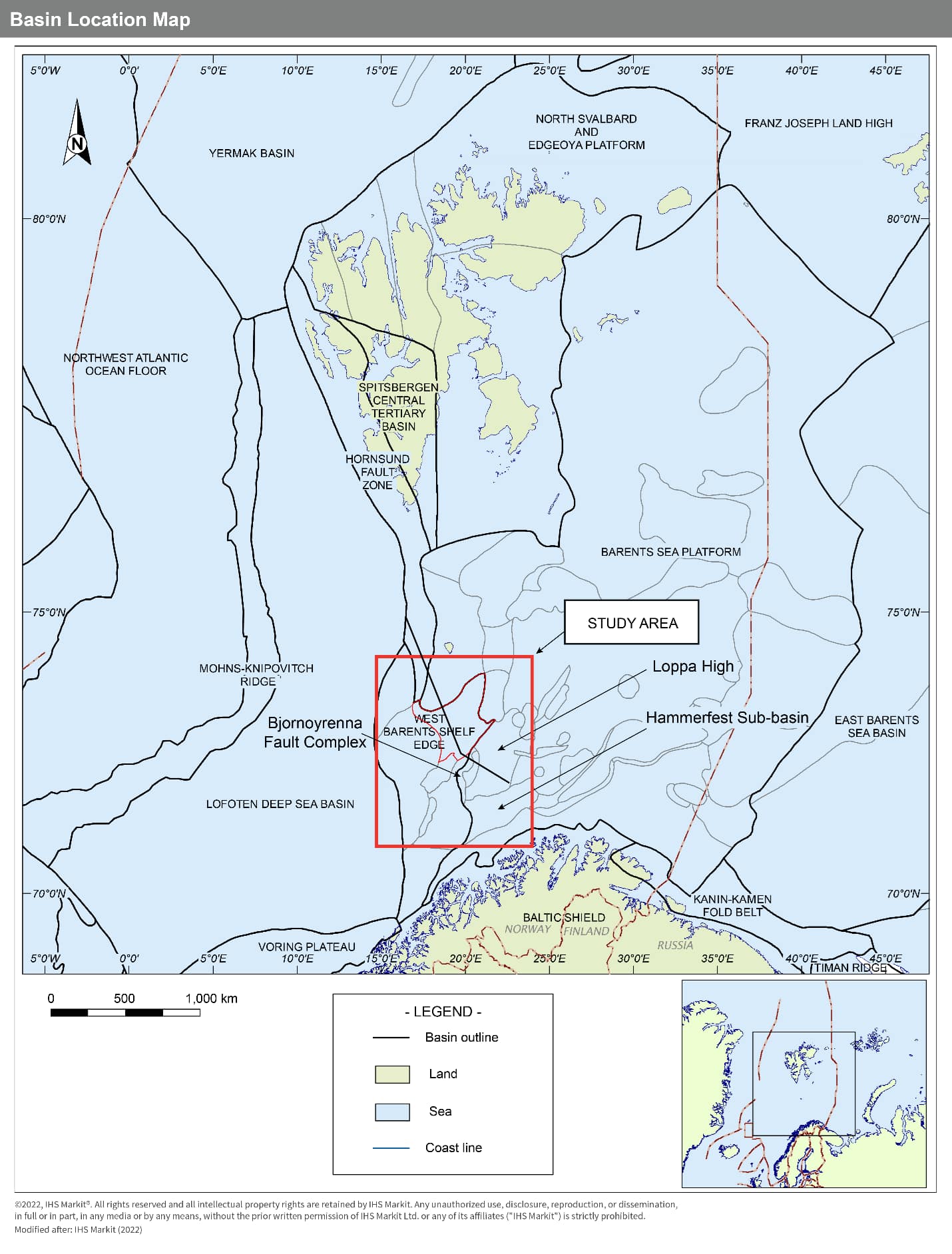 Overall, the industry's exploration interest in this area is undeniable, however it is thought that there is more reluctance to provide approval for drilling projects in the 'risky' Barents Sea compared to drilling other parts of the Norwegian Continental Shelf (NCS). The complex geological configuration and associated exploration risks are considered the key hindering factors shaping the exploration history of the area of interest.

With regards to the upcoming exploration drilling, Equinor plans to spud its Snofonn North exploration well in March 2022 followed by Skavl Sto. Snofonn North will primarily target the Lower Jurassic Tubaen sandstone while the Upper Triassic Fruholmen Formation comprises the secondary target. Completion of drilling operations in Snofonn North will be followed by spudding of Skavl Sto to test the Lower to Middle Jurassic Sto Formation. The close distance between the proposed locations of these two wells, in combination with the different target formations, raised questions about the drilling plans, thus; a geological approach has been deployed to identify the risks involved.

The stratigraphy of the area of interest also includes the Nordmela sands, which were deposited after the Tubaen and before the Sto. Nordmela sands are proven reservoir rocks in neighboring fields e.g. Johan Castberg. However, integration of the subsurface geology and the presence of eroded fault blocks with the operator's targets for the proposed wells leads to the assumption either that Nordmela is absent at this location, due to erosional processes, or that it is present but exhibits very poor reservoir quality. Figure 2: Proposed well locations map in the SW Barents Sea showing the locations of the discoveries made to date organised in a NE-SW trending band that is believed to follow the Bjornoyrenna Fault System.

Observation of the discoveries to date in the area in plan-view suggests that they are situated in an ''organised'' cluster in a NE-SW trending band (Figure 2), which follows the orientation of the Bjornoyrenna Fault System. The geometry of the discoveries suggests that they are hosted in elongate structures, which are aligned to the Bjornoyrenna faults, as expected. Consequently, it is believed that the occasional presence of sharp limits at the edges, with the Skavl discovery field representing a characteristic example, is indicative of fault-bounded structures.

Very limited to no discoveries were made east and west of the ''zone'' (Figure 2). East of the fault complex at the Loppa High, the Neiden oil discovery is situated at the northern part of the platform whereas, Alta and Gohta oil and Salina gas were discovered in the southern part. Between Neiden and the 'cluster' in the south, there is a large area belonging to PL 1078 where no discoveries have been made to this day. In contrast, all exploration wells drilled west of the fault system at the Veslemoy High and Bjornoya Basin were dry, with the Pinovin gas discovery in the Bjornoya sub-basin comprising the single exception.

There is no doubt about the presence of a working petroleum system in the area.

For extensive analysis of the exploration history of SW Barents Sea, the geological development of the area and the associated key structural features as well as the impact on the petroleum system and planned exploration drilling, customers can view the full report in GEPS.

Clients can also find extensive information about the operations in Snofonn North and Skavl Sto wells in the dedicated articles in GEPS.