The health of the Canadian manufacturing sector improved in September, according to the latest IHS Markit PMI survey data. A renewed upturn in new orders in particular brought some welcome news for manufacturers across Canada, but none more so than those in the consumer goods sub-sector, which reported an especially sharp improvement in September.

The headline PMI figure rose above the 50.0 no-change mark, posting 51.0 in September up from 49.1 in August. Despite signalling only a marginal improvement in the health of the manufacturing sector, the rate of increase was the fastest for seven months, driven by rising order book volumes and an increase in production. Notably, the rate of cost inflation eased to the slowest pace for over seven years, allowing Canadian manufacturers to keep the rate of charge inflation subdued in order to maintain competitiveness.

Cause for optimism as third quarter ends

Although showing new signs of life, the lacklustre expansion highlights how business conditions for manufacturers across Canada remain challenging, and how a further improvement in demand is likely needed to sustain the recent return to growth. The latest official GDP data showed the economy as a whole flatlined in July, with GDP unchanged on June. The manufacturing sector contracted by 0.1% (Manufacturing GDP, chained 2012 dollars, Source: Statistics Canada) . Moreover, the PMI data prior to September underscored the potential for a contraction, with readings consistent with falling GDP. 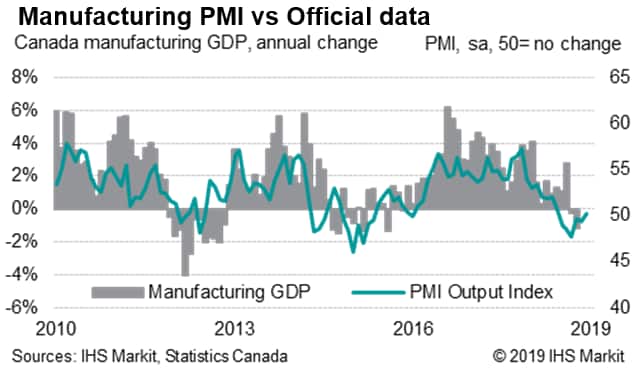 Consumer goods producers reported the fastest rate of output growth for 13 months, alongside a sharp rise in new orders and a further expansion of workforce numbers in September. The steep increase in both production and order book volumes were key contributors to the further improvement in the health of the sub-sector, and placed consumer goods as the strongest performing of the three monitored categories to pull the manufacturing sector as a whole back to an expansionary footing, following the downturn in August.

Investment goods producers (makers of capital equipment such as plant and machinery) also reported a renewed expansion in September, driven by the first rise in output since February. The sub-sector's headline PMI posted above the 50.0 no-change mark, albeit only slightly, helping to contribute to the overall manufacturing up-tick. Workforce growth in the sub-sector was solid, and outpaced that seen in consumer goods, despite relatively lacklustre demand among both domestic and foreign clients.

Overall manufacturing growth was once again weighed down by the intermediate goods sector - a large component of overall Canadian manufacturing comprising producers of goods made as inputs to other manufacturers - which registered a ninth consecutive monthly contraction in operating conditions, cementing its position as the worst-performing sub-sector in September. Further falls in production and new order levels were linked to weaker market conditions. Despite this, the contraction was only modest, but sharp enough to send the sub-sector's output expectations for the next 12 months to the weakest in 2019 so far. 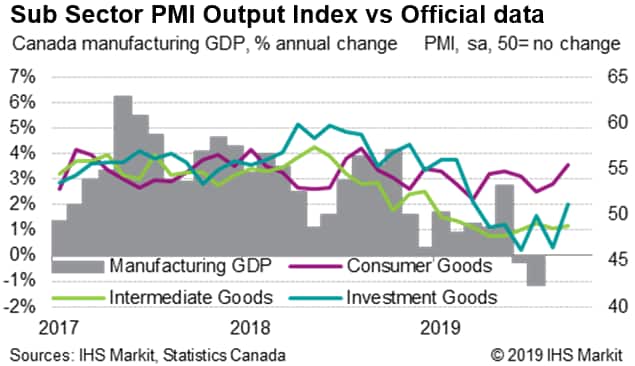 Intermediate goods producers were not alone in downgrading their output expectations in September, as the level of positive sentiment reported by the consumer goods sub-sector also dipped to a nine-month low. Overall, the degree of confidence across the goods-producing sector consequently remained subdued, with Canadian manufacturers uncertain about what lies ahead over the next 12 months, often citing worries regarding ongoing trade wars and the upcoming election. Nonetheless, with the forward-looking indicators of new orders and business expectations showing some improvement in the latest survey period, the worst may be over for the time being. 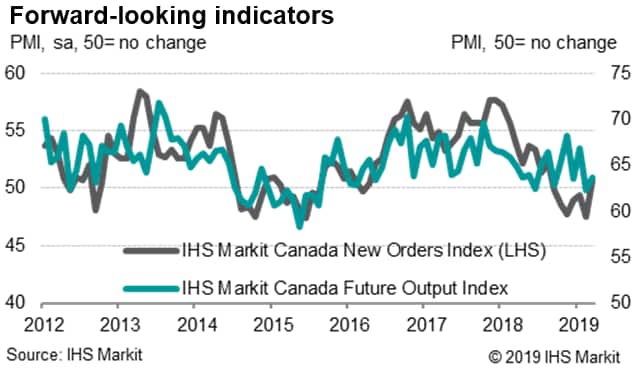