Southeast Asia is a very attractive market for renewable energy, owing to its rich renewable resources and surging energy consumption. Growing at an average pace of more than 5% per annum, power demand in Southeast Asia is projected to keep rising over the next decade. By 2040, IHS Markit forecasts that renewable energy[1] will make up more than 18% of total power generation in the region. The region has an aspirational target to increase renewable energy's share of the primary energy mix to 23%, and this is coupled with the individual country's renewable targets. With a focus on increasing renewable energy's share in the generation mix, Southeast Asian governments have provided various support to investors and developers; apart from the tax incentives that are already in place, the countries have also embarked on renewable tender schemes to grow renewables capacity while keeping generation costs low.

Since 2016, over 4.6 GW of renewable tenders have been called across Southeast Asia, mainly for solar PV capacity. Currently leading with 2.73 GW of renewable tenders, Malaysia has demonstrated the effective use of tenders to both lower the cost of solar generation and grow renewables capacity. Malaysia introduced large-scale solar PV tenders in 2016 and has already issued four tenders to date. The country also introduced tenders for biogas (2018) and small hydropower (2019) while utilizing the current feed-in tariff (FIT) as a reference price for bidders to compete against. Myanmar and Singapore have also shown their commitment to increasing installed solar capacity by launching a 1 GW tender and multiple tenders focusing on the rooftop and floating solar projects, respectively.

In 2019, Philippines announced its plan to launch a 2 GW renewable tender through a new Green Energy Auction Program to facilitate the procurement of renewables by distribution companies to meet the renewable portfolio standard. If earlier tenders called by Meralco serve as an indication of prices, this tender will lower the country's electricity cost, which is known to be among of the highest across Southeast Asia. Vietnam will be switching from FIT to reverse auction bidding for solar, its first-ever renewable tender. The nation is expected to launch several pilot tenders in 2020, consisting of ground-mounted and floating solar photovoltaic (PV). 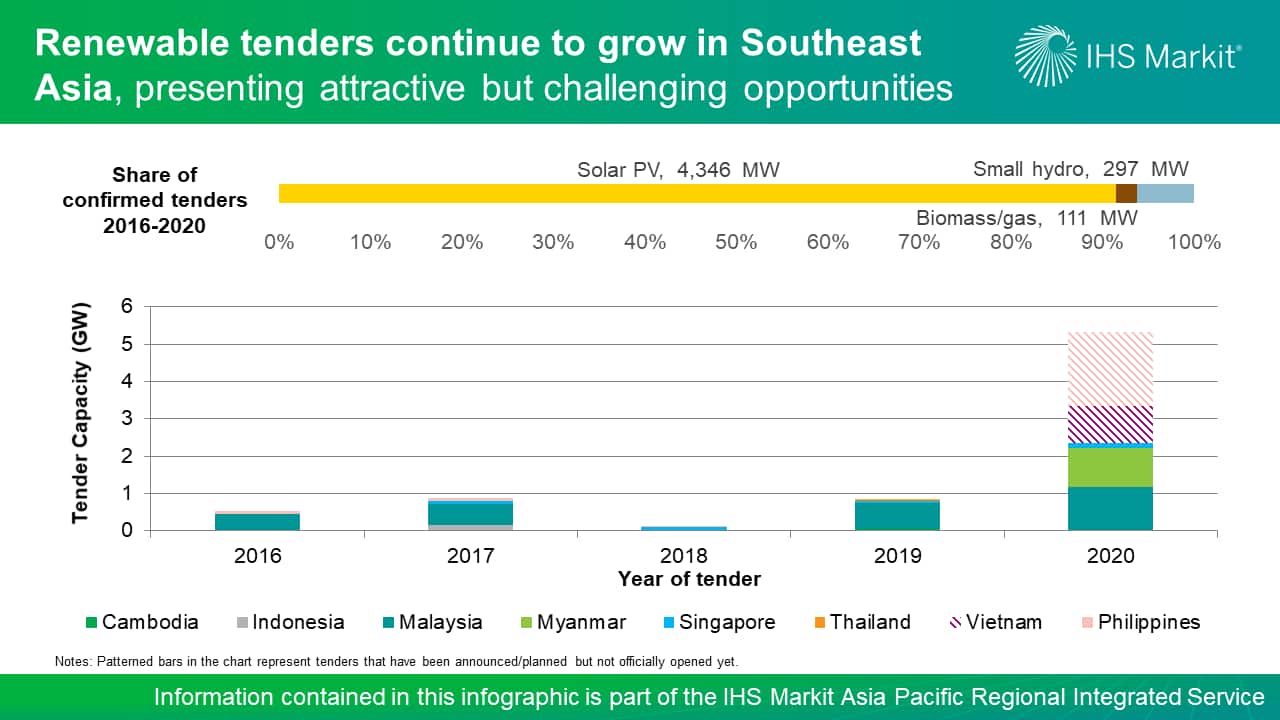 There are diverse challenges across renewable tenders in Southeast Asia. Developers and investors looking to develop of finance projects via renewable tenders must be cognizant of the varying requirements such as foreign ownership restrictions, land acquisition/ownership restrictions and terms of payment in the power purchase agreement, all of which may affect the project's viability. There may even be differences from tender to tender within the same country. Therefore, developers and investors must factor these into their bids while concurrently putting in place the appropriate risk mitigation measures.

Partnership with local companies brings about benefits beyond just circumventing foreign ownership restrictions. Local partners help to overcome foreign ownership restrictions, while still allowing control and profits to go to the foreign company. Additionally, local partners can help the company to navigate through complex land acquisition processes and provide access to local financing. These can improve the prospects of the bid and also the project when it comes to fruition.

Learn more about our renewable energy research in the Asia-Pacific region from our new Asia-Pacific Regional Integrated Service.

Joo Yeow Lee is an associate director with the Gas, Power, and Energy Futures team at IHS Markit, covering the power and renewable markets in Southeast Asia.

Ying Ting Lew is a research analyst with the Gas, Power, and Energy Futures team at IHS Markit, focusing on research and data analytics on renewable energy within the Asia-Pacific region.

[1] Hydropower is not included.