Despite cautious positions on the energy transition adopted by certain governments in the region, the potential for growth in renewable power in Eastern Europe toward 2030 is significant. Even Poland - where the government has so far held off from agreeing to the EU's 2050 net-zero target - activity in the power sector itself gives cause for optimism.

IHS Markit's planning case expects higher renewable capacity deployment than envisaged in the national targets of several countries as a result of government incentives, such as tenders. Approximately 8.3 GW of capacity is expected to be auctioned in Croatia, Hungary and Poland in the next 18 months, with Poland the single largest constituent with almost 6.5 GW.

Largest opportunity is in Poland

Poland is finalizing its national "Energy Policy 2040". Among the main targets are an aim for renewables to deliver 32% of final power demand by 2030. To meet this renewable ambition, Poland's plan expects an additional 3.6 - 5.6 GW of solar PV, an additional 2 - 3 GW of onshore wind, and a total of 5.9 GW of offshore wind to be installed by 2030. IHS Markit expects all targets to be met with the exception of the offshore wind target for 2030; however, we do expect Poland to exceed its 2040 offshore target of 8-11 GW.

There are a number of reasons for a robust growth outlook for Poland despite the government's cautious embrace of the energy transition. First of all, participation in Poland's auctions for the past two years has been high, especially from onshore wind, leading to renewable power being contracted at levels below market prices. Secondly, Poland will likely fail to meet its 2020 targets for renewables, so will have to re-double efforts to reach 2030 objectives. Finally, major utilities such as PGE have announced renewables strategies to the market. It is clear that coal generation will eventually be comparatively too expensive.

Similarly, the Hungarian government may have reacted with caution to the EU's Green Deal when it was unveiled in 2019, but by mid-2020 the Hungarian parliament had passed a net-zero 2050 target into national law. There is also a solar PV boom underway in Hungary - with a record 1 GW of new solar PV added in 2019, and further auctions are timetabled.

And then there is the offshore wind potential. In Poland, the growth opportunity for offshore wind is huge. IHS Markit expects Poland will have 0.7 GW of installed capacity in 2025, rising to 4.2 GW in 2030, 8.3 GW in 2035, and 12.3 GW in 2040. There are already three projects at the design/permitting stage totalling around 3.4 GW. Under Poland's draft Offshore Wind Act, Poland will hold auctions for 5 GW of capacity in two rounds of 2.5 GW each in 2025 and 2027. Bidders will compete for contracts-for-difference (CFD) remuneration.

Countries such as Bulgaria and Romania have draft plans to launch competitive auctions in the next few years, but these countries already met their 2020 targets ahead of schedule, thanks to a combination of hydropower in the mix and biomass used for heating. As 2030 approaches, and the EU raises the possibility of tougher targets for carbon emissions, it's clear that renewable power offers huge potential in countries where coal has traditionally been the dominant fuel. 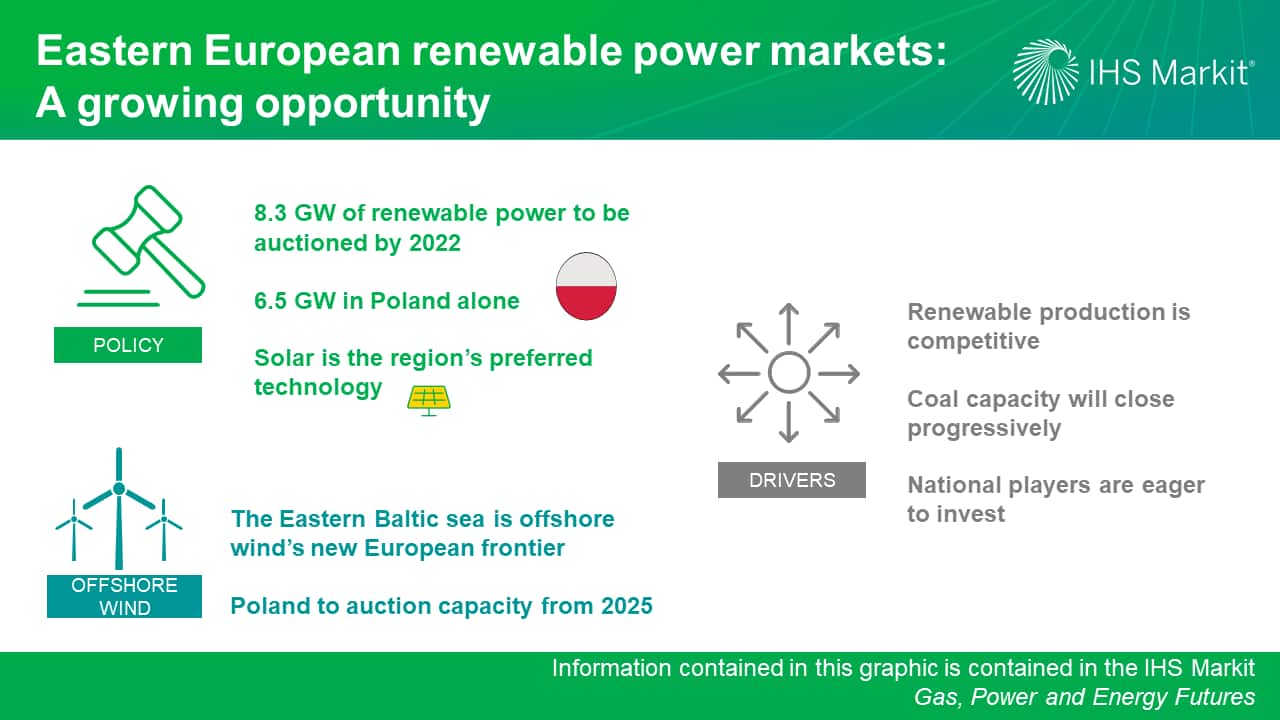 Zoe Grainge is a senior analyst on the Climate and Sustainability team at IHS Markit.