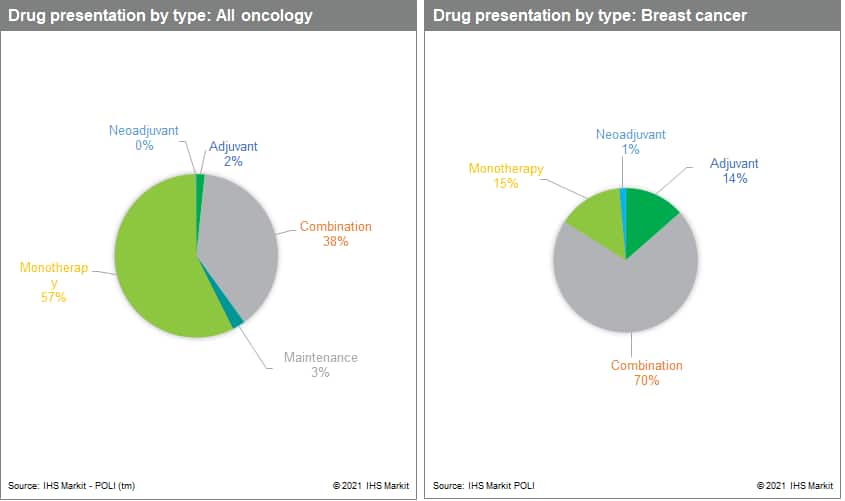 In theory, combination therapies face greater challenges in securing reimbursement because the initial therapy (i.e., "backbone therapy") has already been priced close to the cost-effectiveness limit, which means that adding another therapy (known as the "add-on therapy") - even if the latter is priced at zero - would push the combination therapy past the country's cost-effectiveness threshold.

To verify if this is the case in reality we examined reimbursement outcomes for all new drug presentations in breast cancer, first priced between January 2011 and December 2020, in the top five European markets using data from our proprietary POLI database. In addition to pricing data, the database provides a comprehensive view into reimbursement outcomes by therapeutic area. 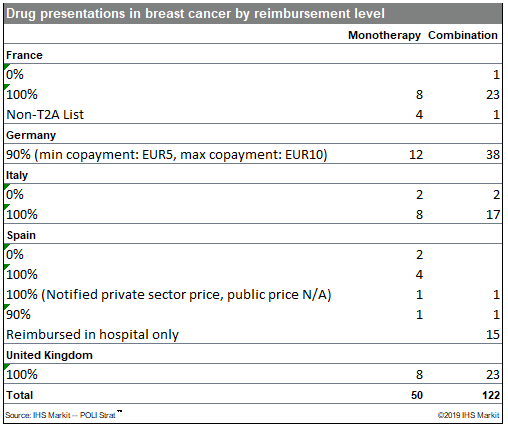 While at first glance, it appears that breast cancer therapies are somewhat more likely to secure reimbursement in the top five European markets compared to monotherapies, the reality is more nuanced. This becomes apparent when the specific P&R regulations in the five markets are considered.

In France, while a product is cleared for reimbursement based on its clinical value as reflected in the SMR rating, the true effect of the clinical effectiveness assessment is seen in the ASMR rating, which is based on the therapeutic improvement in comparison to other available therapies. The ASMR rating affects the product price and ranges in value from I (major improvement) to V (no improvement). Among breast cancer drugs in France, out of the 25 combination therapies, none were given ASMR ratings of I or II, one was given ASMR III, 17 were given ASMR IV, six were given ASMR V, and one had an Insufficient ASMR rating. As a result of the less favorable ASMR ratings, combination therapies - while reimbursed - would have faced greater pressure on prices compared with monotherapies.

In Germany, all medicines are generally reimbursed, and only after a year of free pricing are subject to price controls in accordance with the level of additional benefit they provide compared to existing therapies and the certainty of the expected clinical benefit. This assessment is coordinated by the G-BA and usually comes after IQWiG completes a review commissioned by the G-BA to assess the product's relative clinical effectiveness. Treatments that are found to provide major, considerable, low, or non-quantifiable added benefit enter price negotiation with the Statutory Health Insurance Funds (GKV), while those found to provide no additional benefit or less benefit compared to appropriate comparators are subject to internal reference pricing. This review of POLI data indicates that combination therapies in breast cancer were never considered to provide a "major added benefit" and were also less likely to be given "considerable added benefit" or "low added benefit" status compared to monotherapies in breast cancer.

In Italy and Spain, where reimbursement eligibility is assessed first and the price is set afterward, it may appear that combination therapies are getting more favorable treatment than monotherapies. However, reimbursement is not officially granted until a satisfactory price has been negotiated. In both of these countries, it is likely that producers of combination therapies had to provide significant price discounts under the risk-sharing agreements commonly used in Italy and as part of the price negotiation in Spain in order to gain a positive reimbursement listing.

In the United Kingdom, all monotherapies and combination therapies in breast cancer first priced over the 10-year period were eligible for reimbursement. NICE guidance was examined and confirmed that none of the breast cancer therapies in the sample currently has negative final guidance from NICE. Positive guidance from NICE triggers a requirement for NHS England to start funding the treatment within three months and is highly desirable to ensure greater product uptake. As a result, manufacturers usually offer a confidential discount and/or a risk sharing scheme - known as a patient access scheme (PAS) in the UK - to stay within the NICE cost-effectiveness threshold and avoid a negative funding recommendation.