The April 2020 Philadelphia and Empire State regional surveys of manufacturing conditions, conducted by the Philadelphia and New York Federal Reserve Banks, respectively, showed the region's manufacturers bearing the full brunt of coronavirus disease 2019 (COVID-19)-related business disruptions. These disruptions are appearing on all fronts; on the supply side, firms need to protect the health of their own workers while many suppliers (foreign and domestic) are having difficulty producing needed inputs. The transportation and logistics network, including trucking, rail, maritime, and warehousing is having trouble maintaining regular schedules, affecting shipments coming into and going out of plants. And of course, demand from end users has dropped tremendously, at least for the short term, because of required closures of "nonessential" businesses, loss of consumer income because of layoffs, and financial uncertainty facing everyone.

Among the industry sectors, producers of food for at-home consumption and other consumer staples (notably paper products and cleaning supplies) are among the few seeing a boost in demand as much of the country shelters in place. Even then, manufacturers frequently need to shift their mix of products from a combination of consumer-ready and those for use in restaurants, hotels, and offices to producing almost entirely for home use. In many cases, the form of seemingly similar products can have different production processes and packaging requirements, along with distribution channels. 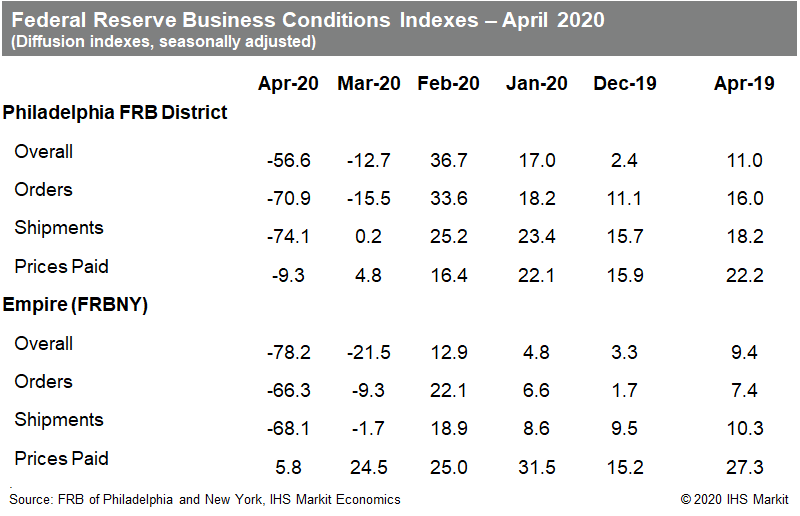 The reading of -56.6 for the Philadelphia region's index of current activity is 44 points below last month's mark and a full 90 points below its level in February. To put these numbers in context, 60% of the firms surveyed in April reported decreases in overall activity, while only 4% reported increases (the index represents the difference). The index of new orders does not provide much hope for a near-term recovery, with a reading of -70.9 signaling near-unanimous declines in orders. The index of current shipments also signaled not much going on, with a drop to -74.1. The index of prices paid slipped below neutral for the first time in four years as prices for most inputs dropped because of a lack of competing demand. The recent sharp drop in oil prices is one factor in this price easing, but certainly not the only one.

The Empire State survey looked even more dismal, with the index of current activity dropping by 57 points to a level of -78.2, way off from its previous series low of -34.3 set in 2009. New orders and current shipments both dropped below -60, while the index of prices paid remained modestly positive at 5.8. 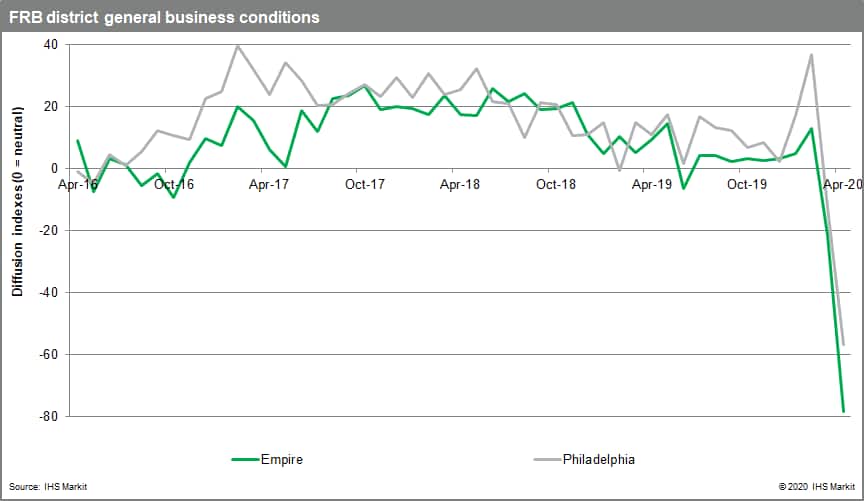 At this point, nothing in these surveys should be a surprise. The March results showed some early signs of the declines to come, but April shows the full effects of the slowdown in activity. From here, in the short term a recovery in production and in final demand depends on getting the disease under control enough to allow more freedom of movement (also allowing more business to open, and more people to go back to work). Beyond that, restoring final demand depends upon the financial damage done by the massive loss of revenues and income that are occurring. The Federal Reserve, Congress, and the Trump administration are providing massive monetary and fiscal stimulus to limit the lasting effects of the (hopefully) short-term shutdowns needed for disease mitigation. Even with these measures, IHS Markit does not expect an immediate snap-back in the economy even if the all-clear is sounded by, say, May or June; rather than a "V-shaped" recovery, we expect more of a "U-shaped" bounce-back that only starts to get going toward the end of 2020 and picks up momentum in 2021.