Regional manufacturing indexes begin long road back in May

The May 2020 Philadelphia and Empire State regional surveys of manufacturing conditions, conducted by the Philadelphia and New York Federal Reserve Banks, respectively, showed the early stages of recovery among the regions' manufacturers, with improvements in current activity, new orders, and shipments after last month's historic lows. Firms still face plenty of headwinds and uncertainty with COVID-19-related closures gradually being lifted. With the number of reported cases dropping (or at least leveling off) in most areas of the survey region, firms that had shuttered are beginning to reopen while others look to gradually add staff and capacity. Plenty of challenges remain, as supply chains pose sporadic choke points while workers are spaced further apart and facilities require constant cleaning. Even with firms up and running, the unprecedented loss of jobs across the region (and the world) raises questions on the demand side, as producers weigh the demand prospects for their goods in the face of decreased wage income and stock market gyrations. 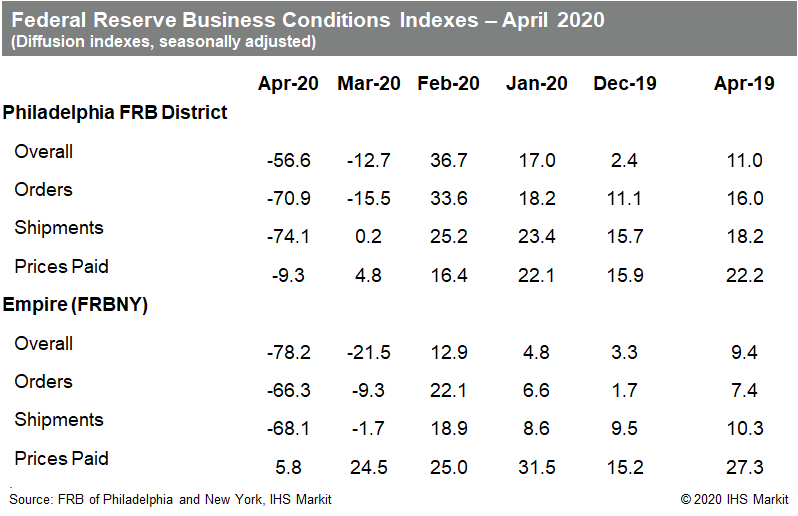 The reading of -43.1 for the Philadelphia region's index of current activity is 13 points higher than last month, but still marks the second-lowest reading in survey history. Breaking down the results a bit, 58% of the firms surveyed decreases in overall activity, while 15% reported increases. The index of new orders shows signs of life (if you look hard enough), with the reading of -25.7 actually a big improvement over last month's level of -70.9. The index of current shipments showed a similar glimpse of hope with a 44-point rise to -30.3. The index of prices paid climbed back into positive territory at 3.2, with prices of oil and other inputs beginning to respond to production cuts and the prospect of rising demand.

The Empire State survey showed similar improvement while climbing from an even lower starting point, with the index of current activity gaining 30 points to a tally of -48.5. Firms reporting increased activity were outnumbered by those reporting decreases by a margin of 15% to 63%. New orders and current shipments both rose to around -40, while the index of prices paid dropped slight to 4.1. 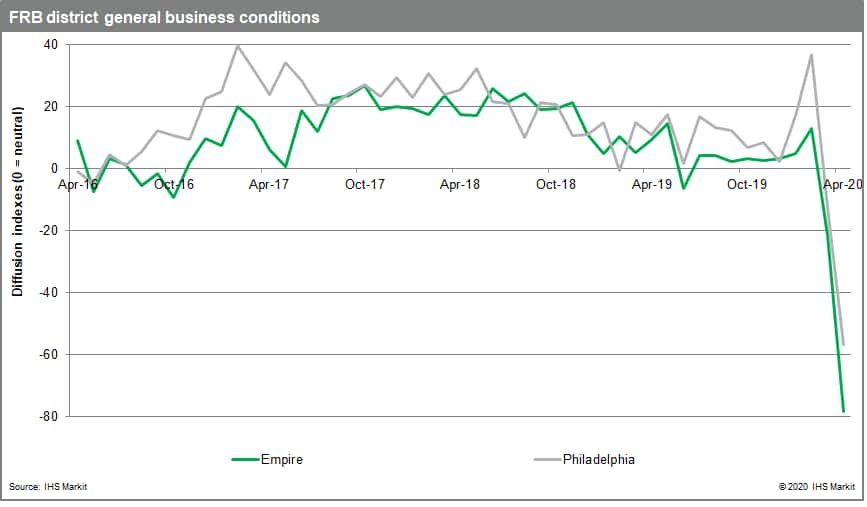 These results are in line with IHS Markit's "flash" Purchasing Managers' Index (PMI) survey results for May, along with our broader expectations for the economy moving forward. The worst is likely over (barring a "second wave" of disease later this year), with states in varying stages of reopening. Goods-producing firms will try to balance the desire to get employees back to work and plants operating at economically efficient levels while adapting to safety guidance that remains in flux.

In the longer term, attention will be focused on the demand side as consumers start to come off the sideline and purchasing shifts from "essentials" to a broader range of goods and services. The Federal Reserve, Congress, and the Trump administration have provided massive monetary and fiscal stimulus to limit the lasting effects of downturn, with future stimulus measures up for debate. Even with these measures, IHS Markit does not expect an immediate snap-back in the economy; rather than a "V-shaped" recovery, we expect more of a "U-shaped" bounce-back that extends well into 2021 and 2022.